The Beatles: Eight Days a Week - The Touring Years

The Beatles: Eight Days a Week - The Touring Years is an American - British documentary about the Beatles and their concert tours and performances. The director of the film is Ron Howard . The film had its cinema premiere on September 15, 2016, and was released on DVD and Blu-ray by Apple on November 18, 2016 .

History of the Beatles tours

In mid-August, Pete Best was replaced by Ringo Starr on drums. On August 22, 1962, the Beatles were filmed by a Granada TV crew performing at the Cavern Club - the group's first TV appearance. The Beatles played in the Star Club in Hamburg from April 13 to May 31, 1962 and from December 18 to 31, 1962. The live album Live! at the Star Club in Hamburg, Germany; 1962 was taken during the second stay in Hamburg.

The success of their first records and the resulting radio and television appearances made it possible for the Beatles to increasingly make guest appearances outside of the Liverpool catchment area. The new road managers Neil Aspinall - an old friend of Paul McCartney - and Malcolm “Mal” Evans , the former bouncer of the Cavern Club, drove the group with their instruments in a used minibus to their performance venues.

On February 2, 1963, the Beatles, managed by the Arthur Howes Agency - which had all Gaumont and Odeon theaters and other cinemas under contract - started their first professional tour of Great Britain at the Gaumont in Bradford as the opening act for 16-year-old singer Helen Shapiro . Also present were Dave Allen , Danny Williams and Kenny Lynch.

The second tour showed the band from March 9th alongside Tommy Roe and Chris Montez . After initial audience reactions, the Beatles were announced as the main group a day later. This was followed by top-class appearances at the Swinging Sound show in London's Royal Albert Hall (April 18, 1963) and in front of 10,000 spectators at the NME Poll Winners concert in the Empire Pool at Wembley (April 21, 1963).

From May 18 to June 9, 1963, the Beatles completed their third tour of England, this time alongside Roy Orbison and Gerry & the Pacemakers . Orbison also resigned as headliner after the first show in favor of the Beatles . In November the group went on tour of Great Britain again, this time as the main group from the start. The partly chaotic tour was accompanied by strong police forces who were supposed to counteract the hysterical expressions of sympathy by female supporters. In order to escape the fans, the Beatles dressed up as police officers in Birmingham . In Plymouth , they managed to escape through the city's canal system while police used water cannons in the streets . On November 4, 1963, the Beatles played in the annual Royal Variety Performance in front of the British Queen Mother Elizabeth , Lord Snowdon and Princess Margaret at the Prince of Wales Theater in London. 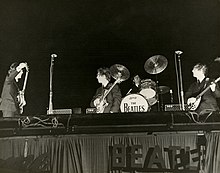 The Beatles live at the Gator Bowl in Jacksonville , Florida, September 11, 1964

From December 24, 1963 to January 11, 1964, the Beatles performed as part of a specially rehearsed Christmas show with music and sketches in London's Finsbury Park Astoria. There were among others Cilla Black and Billy J. Kramer & the Dakotas . This was followed by a three-week guest performance at the Olympia Theater in Paris, but only as the opening act for the then very popular artists Trini Lopez and Sylvie Vartan .

On December 26, 1963, I Want to Hold Your Hand / I Saw Her Standing There was the Beatles' first single on Capitol Records . The single rose to number 45 on the Billboard Hot 100 on January 18, 1964 . Two weeks later, I Want to Hold Your Hand topped the charts. It was the commercial breakthrough for the Beatles in the United States. The album Meet the Beatles! reached number one position on February 15, 1964 on the US Billboard 200 , where it remained for eleven weeks. By the end of 1966, more than five million copies had been sold in the United States.

The Beatles first went on a world tour on June 4, 1964. Since Ringo Starr suffered from severe tonsillitis, he was replaced by session drummer Jimmie Nicol at performances in Europe and Hong Kong . Only in Sydney did Starr meet up with the band again.

From August 19 to September 20, 1964, the Beatles completed their first major US tour, which was like a triumphal procession. The Beatles refused to perform in stadiums where racial segregation was practiced, so it was canceled for concerts. Just three weeks after their return, the Beatles started another month-long tour of Great Britain on October 9, 1964. The year ended with the second edition of the Beatles Christmas Show at London's Hammersmith Odeon , which included 39 appearances in three weeks. 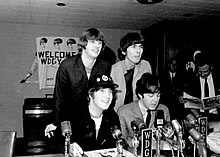 The Beatles in August 1965 during a press conference

From June 20 to July 3, 1965, the Beatles completed a two-week European tour. Just a month later, they went back to the United States. On August 15, 1965, the group played the biggest live performance of their career in the sold-out Shea Stadium in New York in front of 55,600 spectators. It was the first time that a pop group performed in an open stadium and the largest paying audience to date at a concert. The noise level from the female fans during the 30-minute show was so high that neither the audience nor the Beatles, who did not use monitor boxes at concerts , could hear the music. In December, the Beatles started their sixth and final UK tour, with The Moody Blues as the opening act. During this tour they also made their last appearance in their hometown of Liverpool on December 5, 1965.

On May 1, 1966, the Beatles were on a British concert stage for the last time as part of the NME Poll Winners concert.

From June 24 to July 4, 1966, the Beatles completed another world tour, which included six concerts over three days in Germany as part of the BRAVO Beatles blitz tour , Munich , Essen and - for the last time on June 26 - Hamburg. Protests by traditionalists in Japan , who refused to allow the group to appear in the Budōkan , a hall in Tokyo mainly reserved for martial arts , caused strife. In Manila the group played two concerts in front of a total of 80,000 spectators. The tour ended with a scandal when Brian Epstein declined an invitation from the Filipino dictator's wife Imelda Marcos to dinner on behalf of the band . During the hasty departure that followed, the Beatles and their staff were attacked by security forces at the capital's airport. Ringo Starr went down after a hook on the chin, and a chauffeur suffered a broken rib.

On August 12, 1966, the Beatles started their fourth US tour in Chicago . The incidents in Asia and the fact that due to the enormous noise level during the performances there was hardly any music to be heard, made the group members increasingly disaffected. After nerve-racking press conferences, public record burnings and demonstrations by the Ku Klux Klan , the group decided not to go on tour anymore and to move their work exclusively to the studio. The tour ended on August 29, 1966 with a concert in front of an audience of 25,000 (admission price was five US dollars at the time) in Candlestick Park in San Francisco .

At the end of the tour, John Lennon said: “We've had enough of the gigs forever. I can't think of any reason that could lead us to another tour. We are honestly exhausted. It doesn't give us anything anymore - it's really not fair to the fans, we know that, but we have to think of ourselves. " 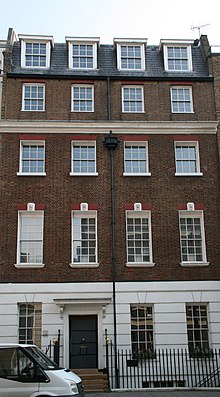 3 Savile Row , front view of the house on the roof of which the concert took place

The planned live appearance for the film Get Back (later: Let It Be ) took place on January 30, 1969: on the roof of the Apple Studios in London's Savile Row , the Beatles played the so-called rooftop concert with Billy Preston in the open air . There was a risk of traffic chaos due to the numerous onlookers , and some residents felt harassed because of the disturbance of the peace. Therefore, the police showed up on site and the Beatles canceled the show after 42 minutes. The concert ended with John Lennon's words:

"I'd like to say thank you on behalf of the group and ourselves and I hope we passed the audition."

"I would like to thank you on behalf of the group and ourselves - and I hope we passed the audition." 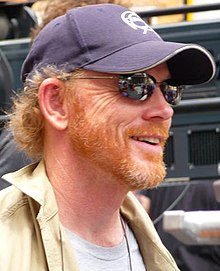 The documentary by Ron Howard tells mainly the story of the Beatles concerts and tours from the entry of Ringo Starr in the group in August 1962 to the last concert on August 29, 1966 at Candlestick Park of San Francisco . The film ends with the Rooftop Concert , the Beatles' last live performance, on January 30, 1969. In addition, the musical and personal development of the Beatles and their albums up to Sgt. Pepper's Lonely Hearts Club Band is shown.

For the film, extensive archive material and previously unofficial sound and film material was used, which was previously only available on bootlegs . The film recordings have been restored. The tonal revision took place under the supervision of Giles Martin . During the film, current interview excerpts from Paul McCartney and Ringo Starr as well as archive footage from John Lennon , George Harrison , George Martin , Richard Lester and Neil Aspinall are shown. In the film, fans from the 1960s explain their view of the Beatles as people and their music at the time, including Elvis Costello , Whoopi Goldberg and Sigourney Weaver as well as other, not famous, people.

Ron Howard covers several topics that arose during the Beatles' tours. The Beatles managed the stress through solidarity, empathy and humor. It is the segregation mentioned in the American South since the Beatles refused to perform in stadiums where racial segregation was practiced, so it was canceled for the concerts. Afro-American Beatles fans explain their situation at the time in the film. Larry Kane, an American journalist, accompanied the Beatles on their US tours in 1964 and 1965 and reports in the film about the circumstances and circumstances of the tours. Ed Freeman, a roadie on the US tour, reports in the film about the technical and organizational inadequacies during the concerts.

The 1966 world tour is portrayed as a heavy burden on the group, so the fans were more ruthless, the press more aggressive and the Beatles less motivated, which also had a musically negative effect. There were various problems (see: story about the 1966 tours ) in Japan, the Philippines and the USA, where some concerts were no longer sold out. George Harrison decided not to go on tour anymore, which was finally accepted and implemented by the group.

The Beatles: Eight Days a Week - The Touring Years was awarded a Grammy on February 12, 2017 in the category "Best Music Film".

Appearances / songs shown in the film

A live album , which, like the film, contains various live recordings of the Beatles, was not released. Instead, a new release of the album The Beatles at the Hollywood Bowl from 1977 was released on September 9, 2016 at the same time as the release of the Beatles documentary Eight Days A Week - The Touring Years under the modified title Live at the Hollywood Bowl . Giles Martin reworked the sound of the recordings.