The Meersburg Castle , also known as the Old Castle or Old Castle , in Meersburg on Lake Constance is considered to be the oldest inhabited castle in Germany due to the construction of the first castle at this point in the 7th century , but no building structure can be identified from that time. The castle is also known as the Old Castle in contrast to the New Castle opposite, built in the first half of the 18th century .

The hillside castle is located on a southern slope facing Lake Constance at an altitude of 440  m above sea level. NN and is now in the locality .

A previously assumed first mention of Meersburg in an original lost document of Otto III. of August 27, 988 (MG. DD. O. III. 446‒448, No. 46) is more related to Merseburg according to recent research and in this case is ruled out for the early days of the castle (and the place) Meersburg.

There are two theories about the building of the Meersburg. The first names the Merovingian king Dagobert I as the builder of the "Dagobertsturm", the keep of the Meersburg, in 630. It is known that Dagobert was in the Lake Constance region at this time and dealt there with the Christianization of the Alemanni . A source from 1548 serves as evidence for this theory; since then it has been represented primarily by Joseph von Laßberg , who bought the castle in 1837 and lived there until 1855. The "Merdesburch" was first mentioned in 1147. A Luitpolt de Merdesburch is mentioned for the first time in 1113 as a witness in a donation by the dukes Berthold and Konrad von Zähringen to the monastery of St. Peter in the Black Forest .

The megalithic ashlar masonry of the Dagobertsturm with numerous mountain peace of the 12th-13th centuries is historical in architecture . Century to compare the region; According to modern studies of this type, the masonry association made of large boulders can be seen as a local variant of the humpback ashlar masonry .

The second theory is based primarily on the observation that no castles were founded in the Lake Constance region in the 7th century, but a striking number in the 12th and early 13th centuries. As mentioned earlier, architectural similarities to the 12th and 13th century castles can be found in the area. The assumption that an earlier, but then destroyed, system has existed since Joseph von Laßberg , but cannot be supported.

The assumption that Karl Martell could have lived in the Dagobertsturm for a short time is therefore to be referred to the realm of legends.

In the next few years, Friedrich II. And Konradin , the last legitimate male Staufer before his sinking in Naples, were found in the Meersburg.

The east side of Meersburg Castle, view from the New Castle 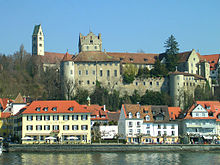 Meersburg Castle seen from the lake

The Meersburg from the air

Time of the Constance prince-bishops

From the middle of the 13th century the castle was owned by the prince-bishops of Constance . In 1233 Meersburg received the town charter of the weekly market. The city then flourished, and the lower city was expanded by landfills around 1300.

The Meersburg was the scene of sieges several times, for example in the "bishop's feud" of 1334, in which two bishops fought for office after a double election. While Nikolaus von Frauenfeld , also known as Nikolaus von Kenzingen, was elected by the papal majority of the cathedral chapter and supported by Pope Johannes XXII. found, his rival Albrecht von Hohenberg was supported by Emperor Ludwig the Bavarian . Nikolaus von Frauenfeld holed up in the castle for fourteen weeks, besieged by imperial troops, which ultimately had to withdraw without success. During this siege , according to various sources, fire guns were used for the first time on German soil . Nikolaus von Frauenfeld, loyal to the Pope, was finally recognized by the emperor. Emperor Ludwig the Bavarian suffered a political defeat before Meersburg, which impaired his Swabian policy and not least strengthened the position of the Habsburgs . 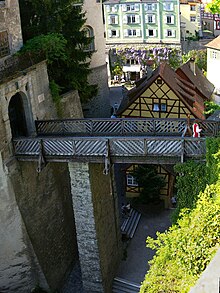 In 1414 Emperor Sigismund stayed at the castle on the occasion of the Constance Council . In 1458 there was a riot between townspeople and the bishop about an extension of the town charter, which was suppressed.

The tower owes its stepped gable to Prince-Bishop of Constance Hugo von Hohenlandenberg (term of office 1496–1532), who established his permanent residence here in 1526 after conflicts with the city of Constance. The Meersburg became the temporary headquarters of the bishops. In 1647 the Swedes set fire to the roof during the Thirty Years War .

At the beginning of the 18th century, the bishops finally began building the New Palace as a modern residence . After 1750 the castle was only used for administrative purposes.

Model of the Meersburg 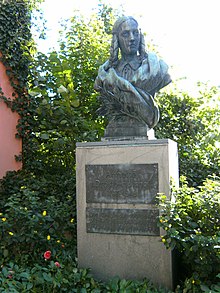 Through the secularization of 1802, Meersburg fell to the later Grand Duchy of Baden . At first the provincial authority of the "Upper Principality by the Lake" used the old castle. In 1814, the old castle was only used for the collection and the apartments of four retired prince-bishop sub-officials. From 1814 to 1836 the newly established court court of the Baden Seekreis was housed there, a branch of the Donaueschingen court.

The collector of medieval writings and books Joseph of Laßberg acquired Meersburg after lengthy negotiations for 10,000 guilders in February / March 1838 by the domain chamber in Karlsruhe and pulled on 7 September 1838 his wife Maria Anna von Droste-Hulshoff , even Jenny called, and his twin children. He kept his collection in the arched, bright hall, the former archive, and set up his study and writing room in the adjoining round room (tower room). Von Laßberg saved the old castle from ruin by buying it.

Jenny's sister Annette von Droste-Hülshoff moved to the castle in 1841 and spent part of the last eight years of her life there. She dedicated the poem from 1841/42 "The Old Castle" to the castle ( "I live on the mountain at the castle, the blue lake below ..." ). She died on May 24, 1848 in the castle.

After the death of Joseph von Laßberg in 1855, one quarter each of the castle went to his heirs Jenny, Karl, Hildegard and Hildegund. Ultimately, the twin daughters Hildegard and Hildegund sold the old castle for 12,000 marks in 1877 to Carl Mayer von Mayerfels from Munich , who set up a medieval museum. After the death of von Meyerfels in 1883 the castle passed to his widow, then in 1910 to his daughter and after her death in 1939 to her daughter Maria Naeßl, née. by Miller. In 1973 Wilderich von Droste zu Hülshoff lived there . To this day, the castle is privately owned and - in addition to the museum that is open to visitors - serves the heirs as a residence. 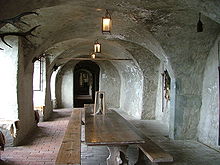 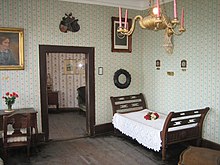 The tour through the castle museum gives an insight into more than 30 furnished rooms. Including the old castle kitchen, the Knights 'Hall , the palace , the well house, the armory, parapets , knights' hall , dungeon , two chapels, stable, North bastion and more. The living rooms and the death room of the poet Annette von Droste-Hülshoff are also included in this tour. As part of a guided tour, it is also possible to climb the “Dagobert Tower ” with a view of the city, the lake and the Alps . In the tower you can see a prison room from the 19th century and the Renaissance hall with treasury . In the deepest part of the tower, the torture chamber gives an insight into the judiciary in the Middle Ages.

In 2018 the basic plaster on the south side of the castle was renewed. The plaster was kept soft so that the moisture can escape from the wall to the outside. A drainage was installed in the castle garden and the battlements were prepared. In 2019 the windows on the south side including the sandstone walls will be renovated. The final plaster is applied.

List of castles and palaces in the Lake Constance district