After he had made his debut in the British Formula 3 Championship in a race with Paul Stewart Racing in 1993 , he contested the entire season in this series in 1994 and finished fourth in the overall standings with one victory.

In 1995 he switched to touring car racing and started for Mercedes-AMG in a Mercedes-Benz C-Class . He took part in both the German Touring Car Championship (DTM) and the related International Touring Car Championship (ITC). While he finished the DTM season in fifth place overall, he finished third in the ITC with a win. In 1996 he stayed in the ITC, which had since been merged with the DTM, and finished fourth in the championship with a race win in Suzuka .

In 1997 Franchitti switched to the CART series in North America and made his debut season for Hogan Racing . At the end of the season he finished 20th overall. In 1998 he was given a cockpit at Team Green and became a teammate of Paul Tracy . Franchitti won three races and finished third in the overall standings with a clear lead over his team-mate Tracy. In 1999 Franchitti played his third season in the CART series. He won three races for Team Green and at the end of the season was tied with Juan Pablo Montoya at the top of the field. He lost the championship title to Montoya because he had fewer wins and was runner-up.

Before the 2000 season , Franchitti had a serious accident during test drives. Although he started the season as usual, he no longer achieved the form of the previous year and achieved 13th place overall with second places as the best results. In 2001 he improved his form and finished seventh in the championship with a win. In 2002 he achieved three more victories. Among other things, he won the race in Vancouver, where he dedicated the race victory to his friend Greg Moore , who died in 1999 .

After he made his Indy Racing League debut at the Indianapolis 500 in 2002 , he competed in three races in the championship, which has now been renamed the IndyCar Series , in 2003 . He started for Andretti Green Motorsport , which was the result of a merger of his old racing team. At the end of the season he finished 25th overall. He had to skip the remaining races of the season because he sustained a back injury in a private motorcycle accident. In 2004 Franchitti returned to his cockpit and finished sixth overall with two wins. A year later he won another two races and improved to fourth place overall. In both years one of his teammates, Tony Kanaan or Dan Wheldon , won the championship title of the IndyCar Series. 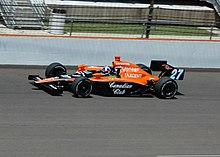 In 2006 Franchitti stayed again with Andretti Green Motorsport. He remained without a win for the first time after two seasons and finished eighth overall. In 2007 he won the Indianapolis 500 for the first time. In the subsequent season he had two serious accidents, which he survived uninjured. He won another three races and secured the championship title of the IndyCar Series ahead of Scott Dixon at the season finale . After winning the championship, Franchitti decided to leave the IndyCar Series. He had already taken part in races in the NASCAR Busch Series and the NASCAR Craftsman Truck Series as well as the ARCA Racing Series and the American Le Mans Series (ALMS) during the season.

In 2008 he started for Chip Ganassi Racing in a Dodge in the NASCAR Sprint Cup . He was the first European in the history of NASCAR to drive full-time in the series. After being sidelined due to an injury, his team ended the season prematurely due to financial problems. In the overall standings he was 42nd In addition, he also took part in races in the NASCAR Nationwide Series and started again in the ALMS and the ARCA Racing Series. In the Rolex Sports Car Series he won the Daytona 24-hour race together with his teammates Juan Pablo Montoya, Scott Pruett and Memo Rojas . At the end of the year, he took part in a non- championship race in the IndyCar Series, where he competed for the first time for Chip Ganassi Racing in an IndyCar race.

In 2009 Franchitti returned to the IndyCar Series and stayed with Chip Ganassi Racing. After he had already won four races, he and his teammates Dixon and Ryan Briscoe had a chance of winning the championship before the season finale in Homestead . In the race, the three drivers made both victory and title more than clearly between themselves. The other drivers were at least one lap behind the leading trio. For the first time in the history of the IndyCar Series, the race went without a break, so that the decision about the victory was only won by the fuel-efficient driving style of Franchitti, who, unlike Briscoe and Dixon, avoided an additional refueling stop a few laps before the end. Thus Franchitti won the second championship title of his career before his teammates Dixon and Briscoe. He also took part in races in the Rolex Sports Car Series and the ALMS.

Franchitti after winning the Indianapolis 500

In 2010 Franchitti stayed with Dixon at Chip Ganassi Racing. At the Indianapolis 500 he had his first win of the season and his second in Indianapolis. Franchitti also led the race for most of the laps. More victories followed in Lexington and Joliet . Franchitti led the championship for only one race during the season. In the remaining races, Will Power was in first place. The two racing drivers fought for the title until the last race. At the season finale in Homestead, Franchitti finally reached eighth place to defend the title and win the IndyCar Series for the third time. After leading the race for most of the laps, he only had to finish among the top ten pilots after Power had retired due to a self-inflicted suspension damage. The fight for the title was determined by the different performances of the two racing drivers. While Power drove in a superior manner on some of the circuits and mostly couldn't keep up with the leaders on the ovals, Franchitti impressed with consistently good performances on all types of track. He finished 13 of 17 races among the top five drivers. With 602 to 597 points, Franchitti won the title fight. In addition, he won the AJ Foyt trophy , which was awarded for the first time and which the best pilot received on the oval courses. In addition, Franchitti again took part in the Daytona 24-hour race.

In 2011, Franchitti was the overall winner of the IndyCar Series for the fourth time

As defending champion, Franchitti competed for Chip Ganassi Racing in 2011 . He started the season with a win at the season opener in Saint Petersburg and two third places from the first three races. At the second oval event in Fort Worth , another win followed in the first race. For the second race, in which the starting grid was drawn, Franchitti drew the 28th of 30 starting positions. He made up a few positions in the race and finished in seventh place. At the next oval race in West Allis , he scored his third win of the season. Upon returning to the street courses, Franchitti won the race in Toronto . He not only attracted attention because of a suitable strategy, but also because of a collision with power. He also finished the next two races on street circuits on the podium. In the penultimate race he was only marginally defeated by Ed Carpenter with 0.0098 seconds and came second. Before the last race, Franchitti led the championship with 573 to 555 points ahead of Power. The last race of the season in Las Vegas was canceled due to a mass accident and not counted. Franchitti's fourth title win was overshadowed by the death of his former teammate and long-time friend Dan Wheldon, whom he had known since he was six. Franchitti and Power took turns leading the table several times during the season. At the 24 Hours of Daytona this season, Franchitti finished second with his teammates Scott Dixon, Juan Pablo Montoya and Jamie McMurray .

In 2012 Franchitti contested another IndyCar Series season for Chip Ganassi Racing. He reached the top 10 twice in the first four races. In the fifth race, the Indianapolis 500 , he achieved victory starting from 16th place. It was his third win in this race. A race later in Detroit he finished second behind his teammate Dixon. At the oval races in West Allis and Newton , Franchitti achieved pole position and retired from the race. In Newton, he already suffered engine damage during the warm-up lap. In the last three races he achieved two more podium finishes with a third place in Sonoma and a second place in Fontana . He finished the season in seventh place overall, losing to his Ganassi team-mate Dixon for the first time. In addition, he again took part in the Daytona 24-hour race and started an ALMS race with his brother Marino. In 2013 , Franchitti stayed with Chip Ganassi in the IndyCar Series. After finishing in the top 10 six times in the first ten races, he finished four of the next five races in third place and finished fourth once. He started from pole position five times this season.

At the penultimate race of the season in Houston , Franchitti was involved in a serious accident. He drove on Takuma Satō , took off and flew into the safety fence, which his vehicle destroyed. Franchitti came to a stop on the track. He suffered a concussion, two vertebral fractures and a fracture in his right ankle in the accident. The vertebral fractures did not have to be operated on, the ankle fracture was operated on on the day of the race. Franchitti finished the season in tenth place in the drivers' championship. In contrast to his teammates Dixon and Kimball, he remained without a win. Dixon won the championship this season.

After the season, Franchitti announced the end of his racing career. Although he was still under contract with Chip Ganassi Racing for 2014 and the treatment of the injuries was successful, he decided, on the recommendation of his doctors, not to return to the racing cockpit. Doctors advised him to take this step because of both the concussion, which was associated with memory loss, and the injuries to his spine, which were not his first back injuries.

Franchitti is a "right brake". Since the clutch pedal disappeared from most racing vehicles over time, racers can brake with their left foot. However, Franchitti always stuck to his usual driving style. For the introduction of the Dallara DW12 in the IndyCar Series 2012, a special kit was developed for him, with the brake pedal on the right side of the steering column.

Franchitti was married to actress Ashley Judd for eleven years . In 2013, the two announced their separation.

Individual results in the IndyCar Series

1 The races took place on the same day.
2 No points were awarded.