Hranice ([ ˈɦraɲɪt͡sɛ ˈuaʃɛ ]) ( German  Roßbach ) is a small town in the Bohemian Vogtland . Hranice is the westernmost city in the Czech Republic .

Hranice is located north of Aš in the Okres Cheb des Karlovarský kraj . The town of Hranice, the Upper Franconian neighboring town of Regnitzlosau and the Saxon municipality of Eichigt (border crossing Hranice-Ebmath) are located in the Vogtland triangle of Bohemia-Bavaria-Saxony. The three municipalities are members of the Friends in the Heart of Europe association .

Aerial view of the borough 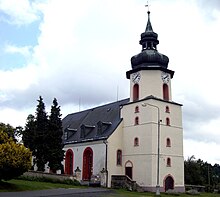 It is believed that it was founded in the 12th century. The oldest mention of Roßbach comes from the year 1318. At that time the town belonged to the church administration of the town of Hof . The original village was on the trade route between Eger (now Cheb ) and Plauen . As early as 1413 it was reported that the population lived mostly from weaving .

The population, not open to innovations, originally successfully refused to be connected to the road network because it was feared that the place would then be easily vulnerable to military action. As a result, Roßbach initially lost its economic connection, which then ultimately led to the decline of industry.

It can be proven that in 1778 valuable woven clothes and muslins with incorporated patterns were handcrafted . In 1808, the first textile factory was set up, mainly producing for export.

In 1882 Roßbach was raised to a market town by Franz Josef I. During the Habsburg Monarchy, the community belonged to the judicial district of Asch or District Asch .

In 1885 the market was finally connected to the railway network via the Asch – Roßbach local railway. The route was later extended to Adorf (Vogtl.) .

In 1904 the first telephone was put into operation and in 1911 the community was connected to the power grid.

The place belonged to the newly founded Czechoslovakia since 1918 and was called Hranice ( German  border ) by the Czechs . After the Munich Agreement Hranice was the German Reich slammed and belonged until 1945 to the district Asch , Region of Eger , in the Reich District of Sudetenland .

The expulsion of the Germans after World War II led to a sharp decline in population. The original place name was deprecated.