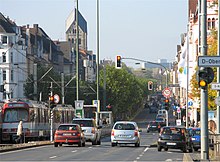 Oberkassel has been a district of Düsseldorf on the left bank of the Rhine since 1909 and belongs to district 4 . The entire district is often incorrectly referred to as Oberkassel. Two bridges connect Oberkassel with the Düsseldorf city area on the right bank of the Rhine. The Oberkasseler Brücke leads towards the old town and city ​​center , the Rheinkniebrücke to Unterbilk and Friedrichstadt .

View from the Oberkasseler bridge

Oberkassel is given the shape of a peninsula by an arch of the Rhine called the Rhine knee . The urban structure of Oberkassel, with a double ring road, follows the course of the knee of the Rhine. Outside are the extensive meadows of the river landscape. The district lies within the Düsseldorf inner city ring and is densely populated. The main axis is Luegallee , which divides Oberkassel into a northern and a southern part. Radial streets direct the traffic to Belsenplatz and the old Oberkassel train station . A perimeter block development from the period between 1900 and 1914 is predominant. The war damage in Oberkassel was significantly less than in other parts of the city.

Oberkassel is extremely popular as a residential location, as there are many of the large old-style apartments that are coveted in Düsseldorf and the district also offers a good and upscale infrastructure. Some of the apartments in the Rhine area offer beautiful views of the Düsseldorf skyline and are among the most expensive residential areas in the state capital. Like the neighboring Niederkassel , Oberkassel has a high proportion of Japanese residents . The strong, also international, demand for Oberkassel residential properties has led to a sharp rise in prices with the accompanying gentrification over the past few decades . With an average annual income of 76,902 euros, Oberkassel is one of the richest districts in Düsseldorf (as of December 31, 2007).

The Luegallee 's highway and main shopping street of the district. In addition to the range of daily needs, there are also many owner-managed specialist shops and boutiques. A rich gastronomic offer both on Luegallee and in the adjacent side streets attracts visitors from other parts of the city to Oberkassel. 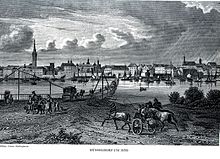 Pontoon bridge between Oberkassel and Düsseldorf, engraving around 1850

In the area of ​​Hansaallee - about 750 m from the medieval town center of Oberkassel - there is a larger early medieval burial ground, of which sections were occasionally examined. During an excavation in 1929, 14 graves were uncovered, the finds came to the Düsseldorf City Museum . They indicate a long period of use from around AD 500–700. The place is first mentioned in the written sources in 1218. Oberkassel was then part of the rural community of Heerdt, first mentioned in the 9th century. In the middle of the 14th century, the parish of Heerdt covered the entire curve of the Rhine; in addition to the village of Heerdt, there were also the modest rural settlements of Oberkassel, Niederkassel, Ober- and Niederlörick and the Rheinaue. A forest belt closed off the peninsula to the west. The Heerdter Busch belonged to the Abbess of the Neuss Quirinus pen . This received the essential income from the parish and appointed the pastor of Heerdter, the only authority in the parish. Separated by the Rhine and due to its political affiliation to Kurköln , the small village oriented itself more towards the hinterland on the left bank of the Rhine than towards the city of Düsseldorf on the right bank of the Rhine, which belonged to the Duchy of Berg . However, Elector Johann Wilhelm von der Pfalz (Jan Wellem) built Fort Düsselburg on the Oberkassel bank of the Rhine in 1689 , a hill for the city of Düsseldorf to protect against attacks from the west. In 1699 a modern ferry was brought from Mannheim to Düsseldorf. This Gierponte , also known as the flying bridge, has an impact deep into the hinterland. Düsseldorf orders and citizens strove for land ownership in the Heerdter parish. The farmers in the parish discovered more and more Düsseldorf as a market. The Seven Years' War left its mark , but only after the territories on the left bank of the Rhine conquered and occupied by France in the First Coalition War did the Rhine finally become a border again with the Treaty of Lunéville in 1801. From 1794 to 1815 Oberkassel belonged to France as part of the Left Bank of the Rhine and the relationship that had grown between Düsseldorf and the parish of Heerdt was also interrupted by a well-guarded customs border.

With the beginning of Prussian rule, the rural community of Heerdt was added to the Neuss district in 1816. In 1839, the first semi-permanent connection between Düsseldorf and Oberkassel was built with a pontoon bridge . In 1854, Oberkassel was connected to the Aachen – Düsseldorf railway line , with passenger traffic ending at Belsenplatz in Oberkassel. The goods could still be carried by rail to the pontoon bridge, where they were reloaded. The Rheinische Porzellanmanufaktur Oberkassel was founded near the train station in 1861 . The company existed there until 1890.

Heinrich Lueg , Franz Haniel junior , August Bagel "the younger" and Friedrich Vohwinkel had formed a consortium in 1895, which set itself the task of building a permanent bridge over the Rhine and a small railway line from Düsseldorf to Krefeld . Furthermore, plots in Oberkassel should be purchased and developed for building; these properties were bought for 30 pfennigs per m² and sold for 30 marks per m² after the Oberkassler bridge was built. In 1896 the Rheinische Bahngesellschaft AG was founded as a project company. On November 12, 1898, the Oberkasseler Brücke was the first fixed road bridge between Düsseldorf and its neighboring communities on the left bank of the Rhine, which was used by Europe's first electric high-speed railway to Krefeld; the toll cost an additional groschen per direction of travel.

The '' Rheinstation '' on the Rheinwiesen, the train station that had existed there since 1854, was replaced in 1898 by the Oberkassler train station on Besenplatz. On December 15, 1898, the Rheinische Bahngesellschaft, or Rheinbahn for short, put the electrical rail link into operation, which led from Düsseldorf via Belsenplatz to Meerbusch and Krefeld. In 1901 the light rail line to Neuss was added as a branch from Belsenplatz .

The Rheinische Bahngesellschaft built a new, strong dike and crossed Oberkassel with a network of roads. The development of land along the new railway line was intended to finance the construction of the railway. From 1900 to 1914 there was brisk construction activity. Up until the First World War , Theodor Balzer , Adam Dickmann , Heinrich Fedler , Oskar Rosendahl , Carl Schaumburg (1867-1940) and Gustav Utermann were among the most important architects for Oberkassel. On average, a hundred new houses were built every year and the population rose from 4,400 in 1895 to 11,400 in 1907. On April 1, 1909, Oberkassel was incorporated into Düsseldorf together with the other places of the old rural community of Heerdt, Niederkassel, Lörick and Heerdt .

On August 1, 1942, numerous bombs fell on Oberkassel during the first major attack on Düsseldorf . The St. Anthony Church was severely damaged.

After the Americans occupied Oberkassel in the course of March 3, 1945 and all bridge connections to the city on the right bank of the Rhine were cut by the German troops, the Rhine became the front line and Düsseldorf became one of the last cities in the Ruhr basin . The former Gauleiter of the NSDAP Friedrich Karl Florian was responsible for the fact that shortly before the Oberkassel Rhine Bridge / Skagerrak Bridge was blown up on March 3, 1945 in Düsseldorf underage Hitler boys were taken from the Oberkassel district on the left bank of the Rhine and then completely inadequately armed and hopelessly southeast of Düsseldorf were used against American armored forces. Only two young people from the Hitler Youth there survived. American troops had both liberated the left bank of the Rhine from National Socialism and surrounded Düsseldorf from the north and south-west. This was followed by seven weeks of mutual shelling, which killed around 200 civilians on the Oberkassel side. However, due to the lack of heavy ammunition on the right bank of the Rhine by the Wehrmacht, the damage to buildings in Düsseldorf on the left bank was limited. The bomb damage was also comparatively minor, so that Oberkassel still today has a largely coherent image of community buildings from the late Wilhelminian era and Art Nouveau .

In 1992, large parts of the district were closed and placed under monument protection. The Oberkassel monument protection area comprises almost half of the built-up area of ​​the entire district, mainly south of Luegallee with a total of 326 listed houses . 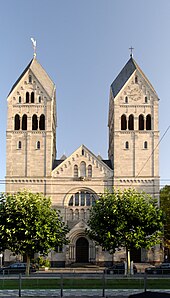 Ev. Church of the Resurrection

In 2013 the square in front of the Bürgerbüro-Oberkassel on Luegallee was named "Werner-Pfingst-Platz". The name is not only dedicated to the memory of the Oberkassel emigrant Werner Pfingst (1915–1978) and family, but also to all families of Jewish faith who once lived in the quarter and were disenfranchised by the Nazis , kidnapped and murdered in the concentration camps . In what was then known as the “ Judenhaus ” at Teutonenstrasse 9, families were forcibly confined to the camps and crammed together until they were evacuated.

In 2011, construction work began on the so-called Belsenpark, a 15.2-hectare urban development area on the site of the freight depot, which was operated until the 1970s. The first apartments and retail stores as well as a two-story underground car park were put into operation in 2014.

Districts of the state capital Düsseldorf