The Olympic champion was the Portuguese Carlos Lopes . He won ahead of Irishman John Treacy and British Charlie Spedding .

The Federal Republic of Germany was represented by Ralf Salzmann , who reached the finish in 18th place.
The Swiss Bruno Lafranchi finished 50th, the Austrian Gerhard Hartmann gave up the race.
Runners from Liechtenstein did not take part. Athletes from the GDR were also not there because of the Olympic boycott.

Note: World records were not set in the marathon because of the different track conditions.

The race started in Santa Monica at Santa Monica College . On the Pacific Coast Highway and Lincoln Boulevard it went to the northwest, before the route crossed Olympic Boulevard after passing Interstate 10 in the northeast . The route now led in a wide left curve to the Pacific coast, which was reached in Pacific Palisades . On Ocean Avenue we continued southeast along the coast to Venice Beach . The port of Marina del Rey was circled, then the course turned east and passed Interstate 405 . On Jefferson Boulevard it went north past Culver City to Baldwin Hills . The route now led east over Rodeo Road and Exposition Boulevard to the Los Angeles Memorial Coliseum . In the stadium there was still one lap to go to the finish.

The favorites were the Australian world champion Robert de Castella , who set a new world record at the Fukuoka Marathon in 1981. The US-American Alberto Salazar won the New York City Marathon three times in a row in 1980, 1981 and 1982 , and in 1983 he became the first world champion . The Japanese Takeshi Sō would have been one of the favorites in Moscow in 1980 , but the Olympic boycott, on which u. a. Japan was also involved, preventing his participation. In Los Angeles he went to the start together with his twin brother Shigeru Sō .

Three marathon runners - Charmarke Abdillahi, Djama Robleh and Ahmed Salah - were the first athletes from Djibouti to take part in the Olympic Games.

At first the field of runners stayed together. After ten kilometers, smaller groups of outliers had formed. It was led by the Turk Mehmet Yurdadön in front of Ralf Salzmann, FR Germany, and Juan Carlos Traspaderne from Spain. A smaller group followed shortly afterwards. a. with the Kenyan Kimurgor Ngeny, the Greek Michail Koussis, the British Geoff Smith and the Norwegian Stig Roar Husby. In the end, however, these runners no longer played a role, they took back places or gave up the race. The next five kilometers were covered very quickly and the first outliers were set again. A larger group of leaders formed, led by Ahmed Salah from Djibouti and Gidamis Shahanga from Tanzania. The next five kilometers had a somewhat more moderate pace again, similar to the initial phase. Nevertheless, more and more runners fell behind from the previously large leading group. At the very front was the Japanese Takeshi Sō, who was about five seconds ahead of a group of strong competitors. Later on, the Japanese joined this larger group that led the field. After thirty kilometers, a group of eight broke up with a significant increase in pace. Among them were the Japanese Takeshi Sō, the Portuguese Carlos Lopes , the British Charlie Spedding , the Irish John Treacy and the Australian de Castella. After the group had run a few kilometers together and the pace had slowed down again, Lopes pushed again at 37 km. Only Treacy and Spedding could keep up at first. In the period that followed, Lopes also separated more and more from his last pursuers. He came into the stadium with a lead of over 35 seconds and was able to complete the final section with a wave. Treacy and Spedding fought a battle for the silver medal on the stadium lap, which the Irishman won with a two-second lead. Of the favorites, Takeshi Sō reached the goal in fourth, another minute behind Spedding. De Castella was fifth, 14 seconds behind Takeshi Sō. Salazar crossed the finish line in fifteenth, Shigeru Sō in seventeenth. Carlos Lopes improved Waldemar Cierpinski's Olympic record by 34 seconds.

The Dane Henrik Jørgensen at the half marathon in Egmond in 1986; in LA he finished nineteenth 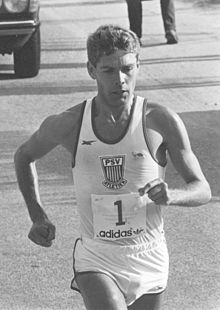 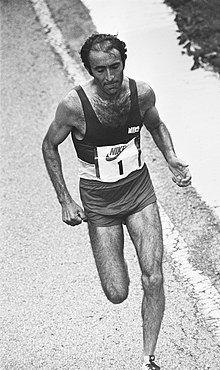 The Dutchman Cornelis Lambregts could not finish the race

Men's marathon at the Summer Olympics

Athletics disciplines at the 1984 Summer Olympics