In France, the Rhône valley from Lyon to the Mediterranean Sea is called the Rhone Valley ( French Vallée du Rhône ) .

There is also a broader term for the Vallée du Rhône in the sense of "Rhône Valley France", namely including the stretch from the Rhone breakthrough through the Jura at the Défilé de l'Écluse to Lyon.

The Vallée du Rhône as the lower reaches of the Rhône, with a length of around 300 kilometers, takes up about two thirds of the course in France and a good third of the entire course of the Rhône. In this sense, according to the French view, Rhône amont 'Upper Rhone' comprises the course of the river to Lyon, Rhône moyen 'Middle Rhone' the valley in the true sense, and Rhône aval 'Lower Rhone' the Mediterranean plains .

The valley is limited by the Lyon Basin in the north, the French Prealps in the east, the Camargue in the south, and the Forez , the Monts du Vivarais and the Cevennes in the west. The valley forms a narrow river plain over long stretches between the wooded valley flanks: the northern section to Montélimar is also called the Côtes du Rhône 'Rhone flanks', the southern section to Avignon Bouches du Rhône 'Rhone estuaries'. The landscapes from the Monts du Lyonnais hot right of the Rhone Pilat , Skin Viverais , Boutières , Bas-Viverais and Pays Garrigues , left (side of the Alps) Valentinois , the tributary Vallée de la Drôme , Tricastin and Comtat .

The transition to the Mediterranean region in the true sense can be seen on the Massif des Alpilles , the westernmost spur of the Alps. From here the Costières and the Plaine de la Crau stretch on both sides of the Rhone . The Rhone already reaches sea level 20 kilometers before Arles, and from this city it is another 30 kilometers to the mouth. 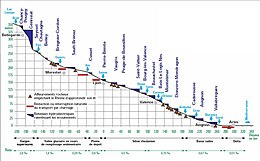 Gradient structure of the Rhone in France

The valley extends over three administrative regions and a total of eight departments, namely from north to south the departments Rhône , Loire , Isère , Ardèche and Drôme in the Auvergne-Rhône-Alpes region , the Vaucluse and Bouches-du-Rhône departments in the region Provence-Alpes-Côte d'Azur and the Gard department in the Occitanie region .

The most important places downstream are (the larger cities with gross population and elevation):

The valley is formed by the Rhône Graben ( Sillon rhodanien in French ), a rift valley that stretches from the southwest of the Jura to the depths of the Golfe du Lion , and a fundamental boundary between the tectonically active cover system of the Alps in the east and the Rump Mountains Massif Central in the west. In particular, the line includes the Valence , Manosque and Alès Graben in the south , here the geological structure is diverse, east of the Rhone the Massif des Maures is pushed as a foreign body to the western limestone Alps .

In the north, the break will be continued in Saône and Bresse Trench ( Doubs -Talungen) together as a Rhône-Saône-ditch or Rhône-Sâone Valley called, and the Rhine valley seen as forest (Rhone-Rhine Graben ), this is also referred to as the Rhine-Rhone Line  (RRL) as a fault zone. These trenches form the core of the Western European Rift System , to which the Limagne-Graben / Cher-Graben zone in the northern Massif Central also belongs in the Rhone-Graben area.

The mistral and its formation.

Due to its south-north course, the valley forms a climate lane. Lyon - which lies roughly on the northern latitude of Ticino or Trieste - still has a strongly Mediterranean- influenced climate, a favorable location that extends to southwest Germany. A special feature here is the Épisode méditerranéen , a southern dam on the Massif Central, which leads to heavy rainfall and flash floods, here in particular called Pluies or Orage cévenol ('Cevennes rain / storm').

Conversely, the aisle can also lead to northern weather events, including the Mistral wind , an influx of polar cold air into the western Mediterranean, which can also be very violent.

When facing west, there is congestion in the Alps , with the Rhone Valley itself protected in the lee of the Massif Central .

Agriculture is practiced in the Rhone Valley and a well-known wine-growing region (Rhône) is located in the appropriate part . There are also a number of industrial locations, including those in the chemical industry.

Due to its location, the valley forms the central north-south axis of France and Western Europe . The routes from Paris , Strasbourg and Geneva to the Mediterranean area meet in Lyon . As the western bypass of the Alps , it is one of the most popular long-distance routes in Europe.

The most important road traffic routes are:

The two banks of the river are connected by numerous bridges, often suspension bridges . Ferries operate in some places .

The high-speed railway line (LGV) Méditerranée (opening 2001) runs through the valley ; it is also largely laid out on the left bank. To the right of the Rhone, the Paris - Marseille railway line forms today's regional and freight transport route. It is only used in sections by passenger trains, mostly to serve a route departing from the Rhone Valley. It is also used by many freight trains between Lyon (Sibelin) and Nîmes (and further on towards Spain).

The Rhone itself is also an important traffic route and is part of the system of the Canal de Bourgogne , built between 1775 and 1843 , with which France realized its long dream of a waterway to the Mediterranean, as well as the Rhine-Rhône Canal , which is now the most economically important waterway. from the Mediterranean to the economic centers of northwestern Europe. The Canal du Center , which is connected to the north, from the Saône westward to the Loire, is less important . The main river ports are Port Édouard-Herriot in Lyon, Port fluvial de commerce de la Drôme in Valence and Port de commerce d'Avignon - Le Pontet .

Because the valley floor only comprises a comparatively narrow river plain, which is dominated on both sides by the traffic routes, the environmental and structural problems in terms of traffic load are similar to those of the Alpine valleys.

The Électricité de France operates several nuclear power plants , which are cooled with river water from the Rhone: