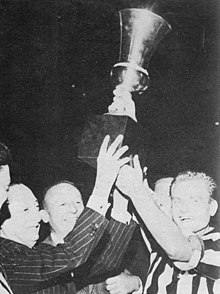 The 1959/60 Coppa Italia , the football cup competition for club teams in Italy in the 1959/60 season, was won by Juventus Turin . The old lady prevailed against Fiorentina in the final and was able to win the Coppa Italia for the fourth time. Coach Carlo Parola's team won 3-2 after extra time and was able to repeat their triumph from the previous year when they prevailed in the final against Inter Milan . Since Juventus Turin also became Italian champions in the 1959/60 season , the defeated cup finalist, Fiorentina, qualified for the European Cup Winners' Cup of the following year, which was the first time this competition was held. The Fiorentina made it to the final in the European Cup Winners 'Cup, where they also defeated the Glasgow Rangers and thus became the first club to win the European Cup Winners' Cup.