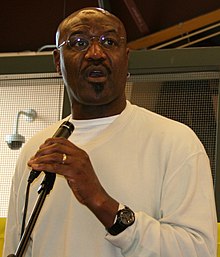 Delroy Lindo is the son of a nurse and a casual jobber . The son of Jamaican immigrants grew up in Lewisham , England. He moved to Toronto with his mother in his teens and moved to the United States a few years later . After watching a production of William Shakespeare's The Taming of the Shrew on PBS , he decided to become an actor. In San Francisco he graduated from the American Conservatory Theater .

Delroy Lindo is an avid fan of Isaac Hayes and Arsenal football club . Lindo lives in Oakland , California , is married for the second time and has one son.

He made his screen debut in 1976 in all kidnap Victoria alongside John Candy . In the sequel to American Graffiti , The Party is over… The sequel to American Graffiti , Lindo played a sergeant in the US Army . Subsequently, Lindo devoted himself exclusively to the theater and appeared for the first time on Broadway in 1982 in Master Harold and the Boys . In 1988, Lindo was nominated for a Tony Award for his role in Joe Turner's Come and Gone .

After working on Broadway, he appeared in two episodes in 1987 as Issac Stubbs in the series Beauty and the Beast in front of the camera, in which Ron Perlman and Linda Hamilton were the main actors. This was followed by a guest appearance in Hawk , the spin-off from Spenser . Then Lindo played alongside Vincent D'Onofrio a gladiator from the 23rd century in The Jugger - Battle of the Best .

In 1990, Delroy was seen in a supporting role in Bob Rafelson's film Land of the Black Sun , starring Fiona Shaw , Patrick Bergin and Iain Glen . A year later followed the comedy with Michael J. Fox , On the hard way of John Badham as captain of the NYPD and thus as supervisor of LL Cool J and James Woods .

He was best known to film audiences for his portrayal of West Indian Archie in Malcolm X (1992) and as Bonafide in Blood in, Blood out (1993). He made his final breakthrough with the comedy Snap Shorty , which was peppered with well-known actors. Among others, John Travolta , Gene Hackman , Rene Russo and Dennis Farina were represented. In the same year he got the role of Captain Wanta in Congo , whereby he was not mentioned in the credits.

Delroy embodied a Colonel in the action film of John Woo , operation - Broken Arrow , alongside John Travolta and Christian Slater . He was then seen alongside Mel Gibson and Rene Russo in the film Bounty , who played the parents of a kidnapped child, while Lindo portrayed an FBI agent . In the same year he played a nightclub owner in the independent film Minnesota , on the side of Keanu Reeves , Cameron Diaz and Vincent D'Onofrio.

In 1997, he and Holly Hunter played the two angels, rather unusual in Live , who arouse the feelings of the two main characters Ewan McGregor and Cameron Diaz for each other, but at the same time impersonate killers. Lindo made a cameo in the mystery film On behalf of the Devil . In Lasse Hallström's adaptation of the novel by John Irving , God's work and the devil's contribution , Lindo was seen in a supporting role alongside Charlize Theron and Tobey Maguire .

In Romeo Must Die he embodies the head of an Afro-American gangster family and father of Aaliyah , who wants to buy up all the land near the port in order to convert it into a stadium for the NFL. The adversary is played by Henry O , who is the head of the Chinese gangster family. Jet Li had his first leading role in English in this film. For his role in Just 60 Seconds as Detective Roland Castlebeck, he attended a stunt driving school and was seen in front of the camera alongside Nicolas Cage and Angelina Jolie .

2001 was seen Lindo alongside Danny DeVito and Gene Hackman as crooks in Heist - The last coup by David Mamet and as a Brigadier General in addition to Robert Redford in The Last Fortress of Rod Lurie . In the same year Lindo embodied an agent alongside Jet Li and Jason Statham in The One by James Wong .

In 2003, Lindo starred in the television movie Profoundly Normal and as a scientist in the science fiction film The Core , alongside Hilary Swank , Stanley Tucci and Aaron Eckhart in front of the camera. The year 2005 gave Delroy several roles, so he played in the two television films Lackawanna Blues and The Exonerated and received the role of agent Carl in the novel Sahara , which was invented especially for the screenplay.

In the action film Domino by Tony Scott , Lindo played a client. He gives his orders to the bounty hunter Domino Harvey , embodied by Keira Knightley , and her boss ( Mickey Rourke ) or accomplice ( Édgar Ramírez ). In the 13-part television series Kidnapped , Lindo impersonated an FBI agent again and was seen alongside Jeremy Sisto . Holger Schwiers dubbed him in this role. He played Loretta Devine's husband and Chris Brown's stepfather in the 2007 film This Christmas , and he was also a producer on the film.

In Pixar's animated film Above , he gave the character Beta his voice and was seen in an episode of the television series Law & Order: Special Victims Unit as Detective Victor Moran. In 2011 he starred as the main character Ronin Gibbons in the short-lived Fox crime series The Chicago Code .