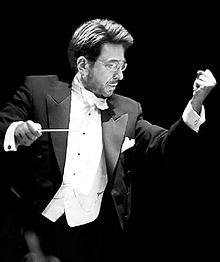 James Allen Gähres was born in Harrisburg , Pennsylvania in 1943 .

Gähres studied music , conducting , composition and piano at the Peabody Conservatory of Music in Baltimore , where he was the musical assistant to the Peabody Symphony Orchestra in his final year, as well as receiving a Fulbright scholarship from Hans Swarowsky at the University of Music and Performing Arts Vienna . He completed master classes with Bruno Maderna in Salzburg .

In the early 1970s, James A. Gähres worked as a freelance composer and pianist in southern Germany . He then worked as a conductor at several German opera houses , including ten years as first conductor at the Lower Saxony State Opera in Hanover , where he conducted around 15 different productions per season . This was followed by a three-year engagement as first Kapellmeister at the Braunschweig State Theater .

James Allen Gähres has repeatedly worked as a guest conductor at the New York City Opera , at the Heidelberg Music Festival , at the Polish National Theater in Posen ( Teatr Wielki (Posen) ), with the German Symphony Orchestra Berlin , the NDR Radiophilharmonie Hanover and the Bavarian Radio Symphony Orchestra . Götz Friedrich invited James Gähres to the Deutsche Oper Berlin to conduct the German premiere of Leonard Bernstein's Candide - Scottish Opera version - in a production by John Dew with Donald George in the title role.

In 1989 James A. Gähres conducted a Beethoven festival concert in the Salle Pleyel in Paris and on October 3, 1990, invited by the Fritz-Busch Society, conducted a gala performance of the 9th Symphony by Ludwig van Beethoven with the orchestra of the Philharmonie Südwestfalen on the occasion of the 1st anniversary of German reunification . James Allen Gähres has conducted the Lower Saxony Youth Symphony Orchestra several times and has been touring with this orchestra repeatedly, for example in Israel , Spain , the USA and Canada . Gähres made guest appearances with the Landes-Jugend-Symphonie-Orchester Saar in France and was invited to England with the same orchestra in April 1994 to conduct several concerts in Oxford . 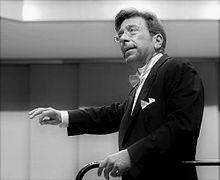 James Allen Gähres after a concert

As a guest conductor James A. Gähres conducted among other Rigoletto at Opera House Dortmund , at the Stuttgart State Opera , he conducted Rigoletto and Norma , as well as The Magic Flute at the Bavarian State Opera in Munich . He was invited to the Teatro San Carlo in Naples to conduct a symphony concert with works by Beethoven and Bartók . Gähres conducted the Bavarian Radio Symphony Orchestra at concerts in Regensburg and the Erfurt Philharmonic Orchestra at several symphony concerts , including Tchaikovsky's 1st Piano Concerto op.23 in B minor and the 5th Symphony in D minor op.47 by Shostakovich , on Theater Erfurt . James A. Gähres was guest conductor of the West Virginia Symphony Orchestra in Charleston , West Virginia , as well as the Meininger Hofkapelle in Meiningen , where he gave a concert with works by Hector Berlioz , Ottorino Respighi , Pyotr Ilyich Tchaikovsky and Felix Mendelssohn's Violin Concerto in E minor, Op. 64 directed.

In 2008 James Allen Gähres was invited to the Meininger Theater to conduct the opera Andrea Chénier by Umberto Giordano . He conducted other performances by Andrea Chénier in January and February 2011 at the Deutsche Oper Berlin . That same year, James A. conducted Gähres invited by Ulf Schirmer , the Leipzig Gewandhaus Orchestra in The Magic Flute by Wolfgang Amadeus Mozart at the Leipzig Opera House .

James A. Gähres conducted several New Year's concerts by the TfN Philharmonic of the Theater for Lower Saxony in Hildesheim in January 2016 . James Gähres conducted other concerts in June 2016 at the 1st LA PALMA FESTIVAL DE MÚSICA in the Teatro Circo de Marte, Santa Cruz de La Palma . On June 15, 2016 a symphony concert with Ludwig van Beethoven's 7th Symphony and the 1st violin concerto by Max Bruch , another concert on June 18, 2016 with The Hebrides by Felix Mendelssohn , the Concerto for Violoncello No. 1 in A minor, Op. 33 by Camille Saint-Saëns and the 1st piano concerto by Brahms op.15 in D minor.