The buckthorn family (Rhamnaceae) form a plant family in the order of the rose-like (Rosales). The approximately 52 genera with approximately 925 to 1000 species are distributed worldwide, particularly in the subtropics to the tropics.

Illustration of the St. Helena olive tree ( Nesiota elliptica ), an endemic to the island of St. Helena that has been considered extinct since 2003

They are mostly evergreen or deciduous, woody plants: independently upright shrubs or trees , but also some lianas ; they are seldom perennial herbaceous plants ( Crumenaria ). They often have thorns . The roots sometimes form a symbiosis with the nitrogen-fixing Frankia .

Most alternate and spirally or rarely opposite, distributed to the stems or standing together on short shoots, arranged leaves usually have petioles. The simple leaf blades are entire or toothed. The stomata are mostly anomocytic or less often paracytic. The leaves can be transformed into thorns (for example Paliurus spina-christi and Colletia paradoxa ). If stipules are present, they may well be developed, reduced to scales, or transformed into thorns.

The flowers can stand individually up to several in the leaf axils or in differently structured inflorescences.

The radial symmetry flowers are usually quite small and are usually five-fold, rarely four-fold; they can be hermaphroditic or rarely unisexual. The flower cup (hypanthium) stands under the ovary, surrounds it or is partially fused with it. The five (rarely four), mostly nailed sepals are fused (sometimes tubular). The five (rarely four) petals are free and can be white, yellowish, greenish, pink or blue. There is only one circle with as many fertile stamens as petals; the stamens are opposite the petals, so the outer circle of the stamen is missing. The stamens are thin. The pollen grains usually have three apertures and are mostly colporat. The nectar-forming , thin to fleshy, smooth or lobed disc , which is located between the pistil and stamens, is very typical of the family ; but it can also be absent. Usually two to three (rarely five) carpels usually two- to above to below-earth, rare one, to vierkammerigen ovary grown. There are usually one, rarely two anatropic ovules per ovary chamber . The stylus ends in a simple scar or has the same number of scars as carpels. The pollination is effected by insects ( Entomophilie ).

It will capsule fruits , berries , drupes , winged nut fruits or schizocarps which decompose in dry part fruits formed. The seeds are dispersed depending on the species by the wind (then the seeds are winged), by mammals or birds. The well-formed embryo is straight.

At flavonoids are kaempferol and quercetin present. 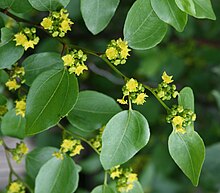 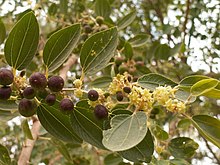 Tribus Rhamneae: branch with leaves and fruit of Condalia globosa 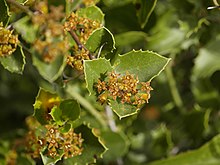 The buckthorn family is widespread around the world and can be found in a variety of habitats . However, the main distribution areas are tropical and subtropical regions, mainly forests.

The family Rhamnaceae contains 925 to 1000 species in 52 genera, which are placed in eleven tribe , seven genera are considered incertae sedis , their exact systematic position in the family is unclear. Some genera are in need of revision , as is the tribe Pomaderreae. The closest relatives of the Rhamnaceae family are Barbeya oleoides (= Barbeyaceae) and the Dirachma (= Dirachmaceae).

The eleven tribes with their genera are:

There is a leaf imprint from the Upper Cretaceous , but its attribution to the buckthorn family is not entirely clear; a flower from the Middle Cretaceous ( Nebraska ) was also described as a buckthorn family . However, reliable fossil records can only be found in the Tertiary , leaves in the Eocene ( Berhamniphyllum ) and the earliest pollen from the Oligocene .

Some species such as buckthorn and buckthorn are used to obtain medicines. Laxatives (cascara sagrada) are obtained from the bark, leaves and fruits of especially Rhamnus cathartica , Rhamnus frangula , Rhamnus purshiana and Ceanothus reclinatus . Ziziphus species such as Indian jujube ( Ziziphus mauritiana ) and Chinese jujube ( Ziziphus jujuba ) are grown for their edible fruits. The inflorescence stems are eaten by Hovenia dulcis .

The dried berries of buckthorn species were used for coloring and as a color varnish under the name Schüttgelb . The wood from Alphitonia , Colubrina , Hovenia and Ziziphus species is used in a variety of ways.

Some Hovenia , Paliurus , and Rhamnus species are used as ornamental plants .