Thalwil is a municipality in the district of Horgen in the canton of Zurich , Switzerland . Thalwil lies on several steps on the slopes of Zimmerberg on the western shore of Lake Zurich .

Thalwil is located on the northern slope of the Zimmerberg . In the forest in the direction of the Sihlwald , which was regarded as a “primeval forest” in the Middle Ages, there are two artificial ponds, the forest pond and the Gattikerweiher. Both served as reservoirs for the operation of the industries in Gattikon. Today the two ponds are very much appreciated as a local recreation area . Bathing is only allowed in the Gattikerweiher.

From the Middle Ages to today

The former farming village of Thalwil once comprised the four Wachten Oberdorf and Unterdorf, Ludretikon and what is now the independent municipality of Langnau . The farm itself was owned by the Counts of Habsburg , who gave it to the Barons of Eschenbach as a fief. The main livelihoods of the population were agriculture, viticulture and, in isolated cases, fishing and shipping. The Muri monastery with its administrative building on the lake and the feudal farms owned larger properties ; furthermore the Wettingen monastery , also with feudal houses and its collatur right over the church. Thalwil has the oldest wood corporation of the Canton of Zurich, the Bannegg Grove, which 550 years ago belonged to the monastery Muri and in 1483 passed the monastery in a document to the twelve beneficiaries of Hofstätten. Today this wood corporation is owned by 16 Bannegg comrades and the community. In addition, the rural forest (formerly Fraumünsterforstamt ) and the municipal forests are located in the municipality . In 1713, the Langnau guard was separated . Since then, this part of the village has formed its own political community with a church. In the course of the 19th and 20th centuries, the population grew rapidly due to its proximity to Zurich. Today Thalwil has practically grown together with its neighboring communities Rüschlikon , Oberrieden and Langnau. After the First World War , "hunger trains" were organized from Thalwil under the direction of Jakob Bosshard von Thalwil, which transported food etc. collected under army guards to the starving areas in Eastern Europe.

In all high and several late medieval documents the place vicus Telwil (before 1140), Tellewilare (1159), Tällewiler (1275), Telwile (1336) and similar is mentioned; today's sound with the full -a- is first recorded in 1331 (ze Tallwile) . Since 95% of all German-Swiss place names that are formed with -wil have an Old High German personal name in the foreground, Thalwil is most likely to be interpreted as the “Hofsiedlung des Tello”; the same personal name is also found in the community names Dällikon and Delsberg . The old High German name Tello , which was no longer known in later times , was later reinterpreted as Tal .

Thalwil maintains a town partnership with La Tour-de-Peilz in the canton of Vaud , and there is also a sponsorship with Val Müstair .

On December 31, 2011, 32.5 percent of the population belonged to the Evangelical Reformed Church and 31 percent to the Roman Catholic Church .

Thalwil is one of the oldest parishes on Lake Zurich. The first church was a church consecrated to St. Martin and was founded in 1179 and was the first church on the left bank of Lake Zurich. Despite being pillaged during the old Zurich War and several lightning strikes, it existed until 1845 and, after the Reformation, served as a place of worship for the Protestant Reformed Church . Due to lack of space and dilapidation, the old church should be demolished. Cantonal councilor Matthias Wieland and master carpenter H. U. Schmied designed a larger new building in the same location for the community in 1836. Construction was delayed, and so in 1844, before the old church was demolished, the community appointed the church architect Ferdinand Stadler for an expert opinion. This brought in a counter-draft, which was rejected. Finally, today was Reformed Church Thalwil built as originally planned version with some changes after Stadler and on October 24, 1847 consecrated .

In 1943 the church burned down to the walls while repairing the tower. It was rebuilt and given a contemporary-looking spire . The church also has the last and only largely preserved organ by Friedrich Haas , built in 1864/1845. From this church in the "Platte" district, you can enjoy a beautiful view over the whole of Lake Zurich from Zurich to Lachen .

The Roman Catholic Church of St. Felix and Regula was built between 1898 and 1899. It is the first church in the canton of Zurich to be dedicated to the Zurich saints Felix and Regula . The church tower built by Anton Higi in 1924 enhances the neo-baroque appearance of the church with its onion dome .

In addition to the two regional churches, the following free church communities are also represented in Thalwil: A Methodist prayer house has been in Thalwil since 1864 and the current building of the Methodist Church since 1924 . There is also a club house for the Chrischona congregation and a chapel for the Baptist congregation .

The first major structural development took place in the years 1838 to 1840 with the construction of the Seestrasse. In the past, the village was only connected to the city of Zurich and the other communities by sea and country roads. This new, not without resistance built transport connection brought the construction of stately mansions and the boom in industry. In the course of time, in addition to various smaller companies, the later large textile companies such as the Weidmann dye works, the Robert Schwarzenbach & Co silk company . AG; also the silk company Gebr. Schmid, later Heer & Co. and the cotton spinning mill Schmid AG in Gattikon . These undertakings, together with the construction of the left bank sea line in 1875 , changed the image of the village to a great extent. New housing estates were built for the workforce, and building speculation began that was only experienced again after the Second World War .

Today, after the changes in the market economy, these large, formerly world-famous textile companies have largely disappeared and have had to give way to residential developments, while more and more small and medium-sized companies have settled in the industrial zone created in 1971 in the upper village or the «Böhni» district, where a commercial center developed . The relocation took place thanks to good transport links through the web and the resulting on the Zimmerberg chain Autobahn A3 .

Unisys Schweiz AG (computer industry) and u-blox (semiconductor components for electronic systems) are the largest employers in the municipality in today's industrial and commercial zone «Böhni» .

Thalwil is the headquarters of the trading companies u-blox , Papyrus Switzerland and Keytrade .

Hunziker AG is located on Tischenloostrasse, which manufactures school furnishings and is popularly known as Hunziker wall panels .

The expansion of public transport contributed to the settlement of other companies. Instead of factories, new jobs were created for the population, and construction activity has increased sharply in recent decades. Farms disappeared more and more, and today Thalwil is primarily a residential community. Around 7,000 commuters drive to their workplaces in the city every day. The first Tempo 30 zone in Thalwil was introduced in August 2018. 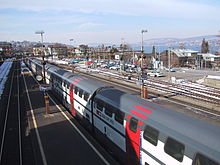 Thalwil train station with a view towards Zurich

Thalwil has a train station with six tracks, which is also served by express trains. In the station, the railway line to Zug branches off from the left bank of the Zürichseebahn (Zürich - Ziegelbrücke) .

The Postbus line to Hausen am Albis via Gattikon  - Langnau am Albis  - Ober albis (top of the pass) begins at the train station . In addition, the PostBus regional center stationed in Affoltern am Albis , which no longer exists today, provided a bus route from the train station to the Serata retirement center.

The local bus company TROL (Thalwil Rundkurs, Oberrieden, Langnau) launched in 1989 is operated by the Hunziker company from Rüschlikon. On November 11, 2000, the transport officers for the local buses in the communities of Adliswil, Horgen, Kilchberg, Langnau, Oberrieden, Thalwil and Wädenswil were merged into AHW Busbetriebe AG to form a regional transport company that operates under the name "Zimmerberg-Bus". In Thalwil, Zentrum / Thalwil, Bahnhof stop: 140, 142, 145, 156, 240.

Gattikon extends from the height of the Zimmerberg down to the Sihl . In the past the village was only a small hamlet and consisted mainly of a mill, today's courtyard and the Sihlhalden.

The industrial boom for Gattikon began in the first half of the 19th century. The mill owner at that time, Hans Jakob Schmid-Höhn, founded a spinning mill on the Sihl. His younger son, Hans Heinrich Schmid-Kölliker , took over the factory in 1842 and expanded it into a mechanical cotton weaving mill in 1859/60. Heinrich Schmid used the hydropower from the Sihl and Gattiker ponds for his factory and even enlarged the forest pond by expanding the hydropower. In 1870 he had the first and in 1907/8 the second school house built in Gattikon. He also campaigned for a better transport system. In 1873 Heinrich Schmid withdrew from his company and left it to his sons Alfred and Ferdinand. In 1892 the old spinning mill and in 1908 the cotton weaving mill were liquidated. In 1918 the brothers Alfred and Karl Bretscher bought the mill. But the high restoration costs after a fire in 1928 drove the company into bankruptcy. In 1933 the “Neuhaus” cooperative became the owner of the property. In 1939 the Paul Sulger company took over the “mill” and set up an electroplating workshop. The company was later managed by his son-in-law Pius Stampfli-Sulger and has been a stock corporation since 1971.

Gattikon experienced the greatest structural development in the last few decades. In 1979 the village center "Obstgarten" (former land of the farm "Zum Obstgarten") was created. Behind it, a large school complex with a multi-purpose hall was built in the “Schweikrüti”. The "Hof" estate was also built over. The Sihlhalden recreational areas and the two ponds have remained from the small Gattikon hamlet.

Thanks to improved transport connections (including the Sihl Valley Railway ), the formerly dreamy Hof Gattikon, the part of the village west of the Zimmerberg on the sunny side of Thalwil up to the Sihl, developed from a few dozen inhabitants to a population of over 2500 people.

Political communities in the Horgen district