Bettwiesen is a municipality and a town in the district Münchwilen the Swiss canton Thurgau . Until 1994, Bettwiesen was a local parish in the Lommis municipality .

Bettwiesen is a street village 4 kilometers north of Wil . The community is located in the south of the canton of Thurgau , the Hinterthurgau , at the foot of the Braunauer mountain. With an area of ​​3.85 km², Bettwiesen is the third smallest municipality in the Münchwilen district after Wilen and Rickenbach . The highest point in the municipality is located at 676  m above sea level. M. near the northeastern municipal boundary. The deepest point is on the border with Lommis at the confluence of the Dorfbach in the Kaabach.

88  hectares of Bettwiesen's land area is accounted for by forest , which makes a forest share of 22.9 percent. 243 hectares are entered in the zoning plan as agricultural land and 53 hectares as settlement areas.

The community of Bettwiesen borders in the north on the political communities Tobel-Tägerschen and Lommis , in the west on Wängi , in the southwest on Münchwilen and in the south on Wil . All municipalities are in Thurgau with the exception of Wil, which is in the canton of St. Gallen .

Rivers and bodies of water

The village center of Bettwiesen lies on the edge of a local groundwater deposit in the rubble of the Dorfbach or Tobelbach and several tributaries flowing into it. The latter include in particular the Schlossbach and the Aneterbach from the slope of the water-rich Braunauer Berg (with several spring water wells) and from "Schlössli" near the hamlet of Winkel. At the end of the Ice Age there was a glacier edge lake here. Raised above these brooks were, among other things, the former castle or the residential tower of the noble von Bettwiesen (near "Schlössli") and the old church, which was demolished at the beginning of the 20th century (south of the schoolhouse). However, today most of the creek sections, such as the numerous open moats in the built-up area, are overturned and no longer recognizable at first glance.

In 1627 the abbot of Fischingen monastery built Schloss Bettwiesen, on the slopes of which Pinot Noir is grown today. Castle and lower castle (castle courtyard) by Bettwiesen.

In 868/869 Bettwiesen was mentioned for the first time as Pettenwison ("Wiese des Petto"). From the Middle Ages onwards, Bettwiesen belonged to the episcopal-Constance office of Tannegger , which in 1693 came to the Fischingen monastery . The latter had owned goods in Bettwiesen since the late Middle Ages, where they had a castle built in 1627. The Marienkapelle mentioned in 1275 belonged to the parish of Wil and was supplied from the monastery. Under his leadership, Bettwiesen was reformed in 1530, but re-Catholicized again from 1542. The Reformed residents were sent to Sirnach and later, probably in the 18th century, assigned to the Affeltrangen church . In 1646 the separation from Wil and the formation of a separate Catholic parish took place.

Agriculture and viticulture were replaced by livestock around 1900. In 1870, a cattle rental fund was established, and in 1889 a cheese dairy. After 1900 two Schiffli embroidery shops and in 1942 a galvanizing plant were set up in Bettwiesen, which employed 235 people in 1964. The industrial and residential construction activities associated with the latter have had a lasting impact on the townscape. From 1936 to 1979 there was a shoe factory. In 1990, 52% of those employed in bed meadows were employed in the second , 35% in the third sector . In recent times, the orientation of the residents towards Wil has increased significantly. In 1990 the proportion of commuters was 69%.

Blazon : Divided by white with two five-petalled red roses with yellow clusters and red with a white cushion . 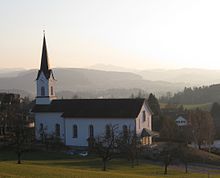 In the predominantly Protestant canton , Bettwiesen, like Hinterthurgau, has always been an exception. Although the proportion of Catholics decreased slightly due to immigration, in 2018 it was still 44.6% (554 people). 286 inhabitants (23.0%) were Protestant Reformed at this point in time.

The legislature forms the municipal assembly in Bettwiesen . The community assembly consists of all Swiss citizens of legal age who live in bed meadows, but mostly only a small part of them exercise their rights and actually attend the assembly.

The district court, which is responsible for bed meadows, has its seat in Münchwilen . Likewise the debt enforcement office and the justice of the peace .

The abbot's palace from the 17th century with the palace chapel, the so-called lower "palace" and the church are architectural landmarks of Bettwiesen.

According to the federal census, there are 33 commercial and 16 agricultural holdings in Bettwiesen. Agriculture used to be very important in Bettwiesen, but it has been steadily declining since industrialization. Today cattle is mainly farmed in bed meadows .

Today there are mainly SMEs in Bettwiesen . The largest operations are a construction business and a metal processing company. From 1953 to 1989 there was a large galvanizing plant using the hot-dip process directly opposite the train station, clearly recognizable in the townscape. Until the economic crisis of the 1930s, there were also several ship embroideries in Bettwiesen .

In 2016, Bettwiesen offered work for 218 people (converted to full-time positions). Of these, 12.7% were employed in agriculture and forestry, 50.9% in industry, trade and construction and 36.3% in the service sector. 73% of the employed population residing in the municipality are commuters.

Bettwiesen has a bread shop that is run by a baker from Matzingen and since the end of January 2016 a Volg with a postal agency. There used to be a cheese dairy, which received many prizes, especially for its Appenzeller and Bettwieser Schlosskäse. But it burned down completely in 2004. There are also some specialty shops in Bettwiesen, such as an arms shop or a car bodywork. There are also some craft businesses of different sizes in the municipality. There is a timber construction, a plumber, a plumbing and a painting shop.

Bettwiesen is on the Wil-Weinfelden railway line , which is operated by Thurbo . During the rush hour in the morning and evening, the line is served every half hour and every hour otherwise. In Wil and Weinfelden there is a connection to the inter-city network in Switzerland.

Since the construction of the Wil Kantonsschule in 2004, students from Bettwiesen have been able to go to the grammar school and no longer have to go to Frauenfeld , which saves a considerable amount of time.

In terms of sports infrastructure, Bettwiesen offers a gym and an all-weather area near the school, a 300 m shooting range and a soccer field. There are also two privately operated riding stables.

There are several sports clubs in Bettwiesen. The different gymnastics clubs make up the largest part ; There are individual clubs for the different age groups and genders (TV, women's team, women's gymnastics club, men's team, senior gymnastics, youth team and girls' team). There is also the Bettwiesen shooting club, which is one of the best in the canton, and a football club. Football is the most popular sport among Bettwieser children, but since FC Bettwiesen does not have any youth work, most of the children play at FC Tobel-Affeltrangen in Tobel.

Political communities in the Münchwilen district