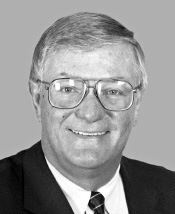 William H. "Bill" Zeliff (born  June 12, 1936 in East Orange , New Jersey ) is an American politician . Between 1991 and 1997 he represented the state of New Hampshire in the US House of Representatives .

Bill Zeliff attended Milford High School in Connecticut until 1954 . He then studied at the University of Connecticut until 1959 . He then served in the state's National Guard until 1964 , after which he became a member of the US Army Reserve . Between 1959 and 1976 Zeliff was the manager and sales manager of EI DuPont de Nemours Co .; then he ran a few smaller businesses of his own.

Zeliff joined the Republican Party and ran unsuccessfully for the New Hampshire Senate in 1984 . In 1988 he was a delegate to the Republican National Convention in New Orleans , where George Bush was nominated as the party's presidential candidate. In the 1990 congressional elections, he was elected to the US House of Representatives in Washington, DC in the first district of New Hampshire , where he succeeded Robert C. Smith on January 3, 1991 . After two re-elections, he was able to complete a total of three legislative terms in Congress until January 3, 1997 . During this time the 27th amendment to the constitution was discussed and passed there.

In 1996, Zeliff renounced another candidacy. Instead, he ran unsuccessfully for his party's nomination for gubernatorial elections in New Hampshire. Today he lives in Jackson, New Hampshire. He has three children with his wife, Sydna Taylor.

Members of the United States House of Representatives for New Hampshire