Gauliga (from 1939 to 1942 sports division ) was the name of the top division of German league football from 1933 to 1945. With it, a uniform top division was introduced in the German Reich for the first time . It took the place of various regional championships that were no longer held.

The term Gau to designate the area of ​​a football league was used in some regional associations, especially in the league structure of the Association of Central German Ball Game Clubs , even before 1933. The name "Gauliga" corresponded to the 16 sports districts formed in 1933. It was abolished again in the course of the 1939/40 season and replaced by "sports area class". This happened against the background that the Reichsbund for physical exercises had been subordinate to the party as NSRL since 1938 and the territorial boundaries of several sports districts did not correspond to those of the party districts.

In the game year 1931/32 there were still 55 regional leagues in the German Reich under different names - such as B. District league and Gauliga - with first division status. In 1932, the President of the DFB , Felix Linnemann , called for the introduction of a "Reichsliga" in which the best clubs should play the German champions . At the DFB Bundestag on October 16, 1932, corresponding plans were presented and approved in principle; An exact regulation, which was supposed to be made in the spring of 1933, was no longer possible because the National Socialists came to power .

From 1933 the football championship was fundamentally reorganized. At the beginning of the game year 1933/34, 16 Gauligen represented the highest level of performance in German football.

The winners of the individual Gauligen determined the German champions in a final round. For this purpose, they were initially divided into four groups of four teams, each of which competed against each other in the first and second leg. The first placed then contested the semi-finals and the final in neutral places, from 1936 also a game for third place. During the Second World War , the mode was adjusted. 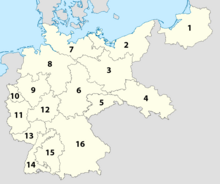 The Gau classification in 1933

After Austria and the Sudetenland were annexed to the German Reich, two more Gauligen were added in 1938.

In the course of the Second World War, new Gauligen were founded in the areas attached to the German Reich. As a result, the following Gauligen emerged.

In the further course of the war, the organization of further trips away from home became more and more difficult, which was due, among other things, to the war-related shortage of fuel and the lack of transport options. Therefore one subdivided the larger Gaue again, there were

Other districts were also divided into several relays, the winners of which, however, determined the Gaumeister among themselves before the championship finals.

Ultimately, the number of participants in the finals rose to 31. From 1942, therefore, the master was determined in the knockout system even without group matches . The opponents were not assigned to one another by lot, but according to geographical criteria.

Football-Gauligen in the German Empire