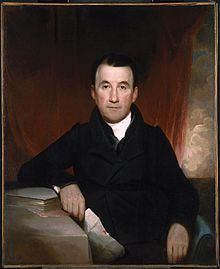 Jonas Platt (born June 30, 1769 in Poughkeepsie , Dutchess County , New York Province, † February 22, 1834 in Peru , Clinton County , New York ) was an American lawyer, judge, general of the cavalry in the militia and politician. He was the son of Zephaniah Platt , who also worked as a lawyer and politician, and the brother of Charles Z. Platt , Treasury Secretary of New York.

Jonas Platt attended a French academy in Montreal ( Canada ). He then studied law , was admitted to the bar in 1790 and began practicing in Poughkeepsie. Platt served as the county clerk of Herkimer County from 1791 to 1798 and of Oneida County from 1798 to 1802 . He later held the post of associate judge at the Supreme Court of New York between 1814 and 1821 .

He died in Peru (New York) in 1834 and was then buried in the Riverside Cemetery in Plattsburgh (New York).