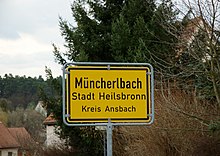 Müncherlbach (colloquially: Erlba ) is a district of the city of Heilsbronn in the district of Ansbach in Middle Franconia .

The Erlbach , which is a left tributary of the Schwabach , flows through the village . The place is surrounded by the corridors Im Flecken and Winterleite (south), Herbstwiesenfeld (north), Tollbuck (north-east), Hundsgraben and Rohrer Grund (south-east). Approx. 1.5 km northwest of the village along the railway line is one of the largest solar fields in the Ansbach district.

The place was first mentioned in a document as "Erelbach" in the year 1300. The place name is derived from the same name of the water, the defining word of which is the alder . Most of the farms belonged to the Heilsbronn monastery at that time , which is why the place was given the addition "monachorum" (1505) or "Münch-" (attested from 1568) to better distinguish it from places of the same name.

In the 16-point report of the Heilsbronn monastery office from 1608, only the 3 teams are listed for Müncherlbach who had the Bonnhof caste office as landlord (3 farmers). The teams of other landlords are not listed. The high court exercised the Brandenburg-Ansbach caste and city bailiff's office in Windsbach . In the Thirty Years' War , most property were burned down.

At the end of the 18th century there were 19 properties in Müncherlbach. The high court exercised the Brandenburg-Bayreuth city ​​bailiff's office in Markt Erlbach to a limited extent. If necessary, it had to be delivered to the Brandenburg-Ansbach judges office in Roßtal . The village and community rulership was held by the Bonnhof caste office in Brandenburg-Bayreuth, but this was disputed by the Nuremberg hospital office. The landlords were the Kastenamt Bonnhof (5 properties), the Principality of Ansbach ( Kastenamt Cadolzburg : 1 courtyard, 2 houses; Kastenamt Schwabach : 2 courtyards, 2 half courtyards), Nuremberg owners ( von Holzschuher : 1 courtyard, von Stromer : 1 courtyard, von Haller : 1 courtyard) and the imperial city of Nuremberg ( hospital office : 2 courtyards, 1 estate; state alms office: 1 courtyard). At that time there were 17 subject families, 6 of which were Ansbachian. From 1797 to 1808 the place was subordinate to the Justice and Chamber Office Cadolzburg .

Districts of the city of Heilsbronn