Oberlößnitz , an independent rural community until 1934, is today a district and a district of Radebeul in the district of Meißen in Saxony . The name Lößnitz is derived from Lěsnica , the Slavic word for "forest stream". The Sorbs who originally lived here probably named this area after the Lößnitzbach , which was much richer in water at the time , which flowed out of the mountain gorge (Lößnitzgrund), then branched into many small tributaries before being regulated and finally flowed into the Elbe at Serkowitz . The Lößnitzgrund separates the Oberlößnitz in the east from the Niederlößnitz in the west. Today the Oberlößnitz is mainly characterized by the viticulture of the single vineyard Radebeuler Goldener Wagen as well as the villa-like development .

Vessels and jewelry with an age of around 5,000 years are the first evidence of settlement in this area. A demonstrable settlement of the Loessnitz took place around the year 600 after the withdrawal of the Germanic peoples in the course of the migration of peoples , when western Slavs from the Wends tribal group settled here. This is attested by burial sites as well as Sorbian expressions, landscape, place and field names (e.g. Lößnitz, Serkowitz , Zitzschewig ), which have survived to this day.

After Henry I's victory over the Slavic armies in 928, the remaining Slavs were Christianized . Nevertheless, the Sorbian language was allowed in court until around 1400.

From the 10th to the 12th century, the landlords, margraves and bishops, German farmers from Main and Rhine Franconia , Thuringia and Lower Saxony settled here, with the previous Sorbian inhabitants being absorbed into the new German settlers. The margraves and bishops promoted viticulture, which is why the farmers cleared many slopes and created wine terraces.

From the end of the 16th to the beginning of the 19th century, a number of mansions were built that served the vineyard owners as summer residences. The population grew steadily during these years and with the establishment of the communal association of vineyard owners of Oberlößnitz (= Weinbergsverein Oberlößnitz) on November 16, 1831, a community-like structure was created for the first time. With the new rural community order of 1838 this peculiar situation was over and the Oberlößnitz had to exercise all rights and duties of a real community with its establishment on August 6th, 1839 in the rooms of the inn Walthers Weinberg . On the neighboring property, the Ermelhaus , there is a Saxon boundary stone .

On April 1, 1934, the Oberlößnitz, together with the neighboring Wahnsdorf , was incorporated into Radebeul.

Since 2005, the internationally oriented Saxon Mt. Everest Staircase Marathon has been taking place on the Spitzhausstreppe , an extreme sports event which the German Ultramarathon Association calls the heaviest and largest extreme staircase race in the world.

The vineyard gate to the Goldener Wagen vineyard

According to legend, Bishop Benno (1010–1107) brought wine to the area in 1066 when he became Bishop of Meißen. It is unclear whether the Sorbs did not bring the vine from the Caucasus to the region as early as the 5th or 6th century .

For the first time was viticulture in today Loessnitz in 1271 in a document on the supply of 12  tuns wine (1 loads of wine corresponds to approximately 808 liters) to the convent Sitzenroda mentioned, Dietrich of Zlauschwitz from the north of Angers of Kötzschenbroda lying corridor of Kötzschberg wine mountains delivered. The first written mention of the term Lößnitz itself can be found in 1286 in a deed of the Meißner bishop ( Withego von Furra ), when he rejected the Lezenitzberg vineyard above Haus Reinhardtsberg from the Dresden Maternihospital.

In 1840 the winegrowers' festival of the Saxon Wine Society takes place in Oberlößnitz for the first time. Setbacks were caused by phylloxera , which was first discovered in Oberlößnitz on August 19, 1887, and viticulture became less and less important. At the beginning of the 20th century there was a renewal of phylloxera-resistant vines on many slopes. 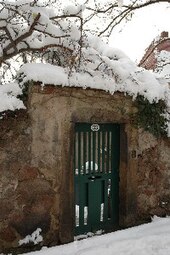 As historic preservation entirety of which is found in Oberlößnitz Hoflößnitz including the vineyard area to the left ( Golden car ) and right of Spitzhaus stairs and to the east up to Bismarck Tower and Spitzhaus . The property of the Bilz sanatorium up to the Mäuseturm in the east, including the former park area up to the edge of the slope near Wahnsdorf in the north, forms another such extensive entity . The Steinbach estate up to Weinbergstraße in the north is considered a smaller whole .

The totality of the Hoflößnitz including the vineyards counts just like the Steinbach estate as a work of landscape and garden design . These include the gardens of the neighboring house Sorgenfrei , the Villa Sommer in the neighboring Augustusweg 44 and the Villa Sonnenhof in Eduard-Bilz-Straße 46. Further to the east, this includes the Jägerberg estate up to just below the one on the edge of the slope Blechburg (already on Wahnsdorfer Flur) and including the later separated property of the Meyer-Villa . As a work of landscape and garden design include the country-Kurt Albrecht in Augustusweg 82 and the Lindenhof in the Maxim Gorky street 18. Further to the west the gardens of lying Villa and Villa Anna hissing in the Bennostraße 27a / 29, of House Leonhardt in Bennostraße 7 as well as the country house of Christian Gottlieb Ziller , the father of the Ziller brothers , who grew up in that house.

Several properties in Oberlößnitz are also listed in the monument preservation ancillary facilities . Not far from the Spitzhaus, this is the Birkenhof at Spitzhausstrasse 28, south of it is the Jordan House at Weinbergstrasse 26 and the gardens of the Meinhold tower house . Further to the east, this includes the Villa Oswald Haenel and on the opposite side of the street the Bennoschlösschen vineyards , the Villa Carl Hugo Haußhälters in Hauptstrasse 53 and the Breitig house .

Numerous winegrowers' houses or vineyard buildings can be found in Oberlößnitz, for example the oldest surviving manor house Bennoschlösschen in the Renaissance style and the house in the Dresden plaited style / early classicism , but also the house in the sun , the house Lorenz , the Retzschgut and the house Hermannsberg with the Cikkurat . The round house in Augustusweg falls out of the architectural framework . The former Oberlößnitz town hall is further south in the main street. The former Kurhaus Wettin is located at Haidebergstrasse 20 on the northeastern border with Boxdorf . 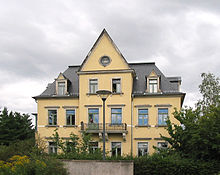 In over 90 years, only six community boards / mayors have been active in Oberlößnitz. On the occasion of the 25th anniversary of the service of Bruno Hörning, who had been the full-time councilor since 1904 and mayor since 1923, Hörningplatz was given its name in 1929 .

In 1933 the architect Alfred Tischer was the head of the local council of Oberlößnitz. At the same time, his architect colleague Martin Hammitzsch was a local councilor.