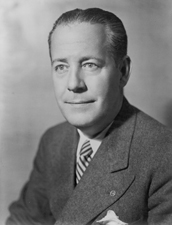 Herbert O'Conor attended elementary school in his home country and then until 1917 Loyola College in Baltimore. He then studied law until 1920 at the University of Maryland . During his school days he was involved in the publication of a school newspaper. During the First World War he served in the Navy Reserve. After his admission to the bar, he began working in this profession in Baltimore. In Baltimore he was employed in 1920 for the newspapers "Baltimore Sun" and "Evening Sun".

Between 1920 and 1922 he was initially deputy prosecutor before he was promoted to prosecutor in 1923. He held this office until 1934. Between 1935 and 1939 he was Attorney General of Maryland. In 1938 he was elected as the new governor of his state against the Republican incumbent Harry Nice .

Herbert O'Conor took up his new office on January 11, 1939. After re-election in 1942, he was able to remain in office until January 1947. His tenure was overshadowed by the events of World War II . The governor supported the federal government's war effort. A Council of Defense was also created in Maryland . In addition to war-related activities, a program of medical care for the poor of the state was being developed in Maryland. O'Conor also sponsored the expansion of the infrastructure. New bridges were built and transportation improved. Trade relations with other US states have also improved.

O'Conor was chairman of the Conference of All US Governors in 1942. He was also a member of numerous other governors' associations. After he had been elected to the US Senate in the fall of 1946, he resigned from the office of governor on January 3, 1947 to take his seat in Congress . However, his resignation took place only a few days before the end of his regular term of office. His successor, William Preston Lane , who had already been elected , then took over his new role earlier.

Herbert O'Conor took office in Congress on January 3, 1947 as Class 1 Senator and successor to George Radcliffe . There he became chairman of a committee that dealt with the affairs of organized crime between the individual states ( Special Committee on Organized Crime in Interstate Commerce ). For the elections of 1952 O'Conor was not nominated again. Its seat went to James Glenn Beall in January 1953 .

After his political career ended, Herbert O'Conor worked as a lawyer in Baltimore and Washington . He died on March 4, 1960 in Baltimore. He had five children with his wife, Eugenia Byrnes.