Mr. Mercedes is an American thriller series by David E. Kelley based on Stephen King's 2014 novel of the same name . It was broadcast for the first time on August 9, 2017 on the Audience broadcaster. Brendan Gleeson and Harry Treadaway can be seen in the leading roles . 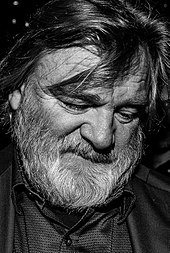 Brady, a psychopathic killer , drives a stolen S-Class Mercedes into a queue outside a job board in Ohio . Detective Hodges, who could not solve the case, tries two years later as a retired, frustrated drunkard to bring him down. Brady wants to drive the ex-commissioner to his death, but Hodges turns the tables and chases Brady with great force, whose criminal madness picks up even more. The cop manages to stop Brady at the last second before attempting to blow himself up at a school choir concert during the opening of an arts center.

The screenwriter and producer David E. Kelley (known from Practice , Ally McBeal and Boston Legal ) adapted Stephen King's 2014 novel of the same name . The novel is the first in the Bill Hodges trilogy . The novels Finderlohn (2015) and Mind Control (2016) followed. Kelley acts as the showrunner of the series, in which Jack Bender (known from Lost ) directed most of the episodes and - like Kelley - is listed as an executive producer .

In May 2016, the US broadcaster Audience , which belongs to AT&T Inc., gave the project the green light for a ten-part first season. After Anton Yelchin , who was slated for the role of Brady Hartsfield, died in June 2016, his role was replaced with Harry Treadaway .

The shooting took place in early 2017 in Charleston , South Carolina . The US broadcaster Audience first broadcast the first season on August 9, 2017. A second season was seen since August 22, 2018. A featurette was presented for this in July 2018. The third season was shown from September 10, 2019.

In German-speaking countries, the first season, published by Sony Pictures Home Entertainment , was released on November 8, 2018.