Pageant of the wine queen of Höhnstedt (GDR, 1963)

Inscription at the Neustadter Saalbau

A bronze sculpture of the heather queen in Schneverdingen 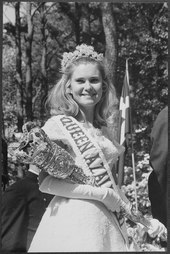 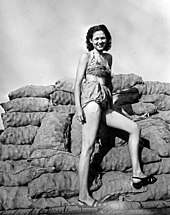 As product Queen (also: brand Queen ) is the representative of a product group, a brand called or region. The temporarily elected ambassador to promote sales or tourism is an instrument of marketing and public relations . The function of the product queen can also be described as a testimonial or advertising figure .

Product queens are usually initiated by the interest representation of a branch (category marketing ) or region. They are found predominantly in the United States and Europe . A large number of product queens have been created since the 2000s, especially in Germany . In addition to the title queen , the representatives are (rarely) also referred to as princesses (e.g. the German wine princess ), countesses or ambassadors . Agricultural products in particular are represented by product queens. Men hardly play a role as brand or product ambassadors.

Its presence in local media, in particular, increases the reputation and awareness of the product. The use of mostly young and likeable women results in a positive image transfer for the product. The use of mostly voluntary advertising media also relieves the marketing budget of the operating organizations. Product queens are increasingly used in marketing in Germany:

“ The intensive use of female product ambassadors by associations and companies shows that this marketing instrument has lost none of its topicality. "

The first product queens were chosen in the United States. They have been representing agricultural producers there since the beginning of the 20th century. Most popular here are the representatives of the dairy industry ( Dairy Princesses ). In addition, in many regions there are Apple , Farm , Peanut , Potato , Pumpkin , Tobacco or Turkey queens . Other sovereigns are associated with regional events. For example, there has been a Rose Queen since 1933 on the occasion of the Tyler Rose Festival in Tyler (Texas) . The transition between product and beauty queen is particularly fluid when it comes to the election for the US festival queens. A specialty is the Cherry Blossom Court, which was initiated in California in 1968 . The five cherry blossom sovereignties chosen for the annual Cherry Blossom Festival represent US Americans of Japanese origin and are intended to strengthen the Japanese-American relationship. In the 1950s and 1960s - also in California - wine queens were chosen. Wine queens have been elected in Germany since 1931 and milk queens ( Bavarian milk queen ) since 1985 . Queens are also of greater importance in the area of ​​beer production in southern Germany (e.g. the Bavarian beer queen , the Württemberg beer queen , the Rettenberg beer queen or the Hallertau and Haunstetter hop queens ).

In January 2003, the Arbeitsgemeinschaft Deutsche Königinnen e. V. founded in Witzenhausen . At the beginning of 2018, 150 product queens from 16 federal states and South Tyrol were members of this association. The working group organizes the parade of the product queens of Germany . This meeting took place in 2014 at the Green Week trade fair in Berlin.

In Preding , south-west Styria, a pumpkin mayor has been appointed every year since 1976 at the pumpkin festival (end of August) on the market square from a group of men with a large bib around a table. The process goes back to an old legend. A pumpkin , an important agricultural product in the region for the production of pumpkin oil , is cut off from a suspension and falls into a pan with corn porridge in the middle of the table. A jury will choose whoever got the most splashes of porridge as the pumpkin mayor.

A pumpkin prince couple is elected in Fürstenfeld , as well as a pumpkin princess in Retzer Land , where a pumpkin festival is celebrated in Unterretzbach and Zellerndorf at the end of October .

In Spitz on the Danube , Prince Marillus and Princess Aprikosia celebrate the Wachau apricot on “Spitzer Apricot Kirtag ” .

Ulrike Neradt ( German Wine Queen 1972/73) was a presenter of the SWR program " Fröhlicher Weinberg " from 1994 to 2007 . The Bavarian milk queen of 1995/96, Claudia Fenzel (née Reischl), was a participant in the second season of the series “Landfrauenküche” on Bavarian television .