Toyota Racing was a motorsport racing team and the factory team of the Japanese car manufacturer Toyota in the FIA - Formula 1 World Championship, in which it participated from 2002 to 2009. In November 2009, the team announced the withdrawal from Formula 1. Headquarters of Toyota Motorsport GmbH is Cologne-Marsdorf . The Panasonic Corporation was doing a sponsoring partner .

Toyota TF104 at the Goodwood Festival of Speed

The team made their debut at the 2002 Australian Grand Prix in Melbourne with Mika Salo and Allan McNish . In its first season, Toyota was only tenth in the constructors' championship with two points from Salo, despite the largest budget of around 500 million euros.

Shortly before the end of the 2002 season , Toyota fired its two drivers and brought on Cristiano da Matta (previously champion car champion) and Olivier Panis .

In the 2003 and 2004 seasons , Toyota made it to eighth place, but only with 16 and nine points. At times Ricardo Zonta ( Hungary , Belgium , Italy , China 2004) and Jarno Trulli ( Japan , Brazil 2004) replaced Cristiano da Matta, who had been demoted to test driver. At the end of the 2003 season, Toyota attracted attention off the racetrack because of suspected espionage .

Oliver Panis at the 2004 United States Grand Prix in Indianapolis

From 2005 to 2007 , alongside Jarno Trulli, Ralf Schumacher also drove for Toyota. Ricardo Zonta and Olivier Panis , among others, worked as test drivers .

Toyota’s declared goal from the start was to drive for the world championship, now the success with the TF 105 designed by Mike Gascoyne seemed to be coming. The aim was to continue this trend in 2006 with the new TF 106, which was presented on November 28, 2005. This presentation, which is unusually early for Formula 1 teams - almost three months ahead of most of the other competitors - can be traced back to the start of the conception in July 2005, although a completely revised TF 105B chassis had been developed during the 2005 Formula 1 season . Experience has shown that this allows so-called teething troubles to be eliminated quickly thanks to a longer test phase, while competitors usually test with interim models (V8 engine and old chassis) in Bahrain, France, Spain and South Africa in winter. However, 2006 turned out to be a very difficult one for Toyota. Only 35 points led to 6th place in the constructors' championship. A setback for the ambitious goals. This was due to the unsteady shape of the car, which had numerous breakdowns during the season.

The following year was very disappointing for the team. Ralf Schumacher and Jarno Trulli could only rarely score and so the season ended with 13 points in sixth place.

For the 2008 season , alongside Jarno Trulli, the German Timo Glock was hired as a driver. Ralf Schumacher left the team for the DTM . Kamui Kobayashi has been working for the team as a test driver since this season . Again the goals failed. In the test drives before the season, only average lap times could be achieved. Both drivers retired in the first race of the season. Jarno Trulli had to end the race prematurely after a technical defect, Timo Glock had a serious accident, which he survived unharmed. Compared to the disappointing previous year, however, it managed to establish itself in the front midfield. The season ended in fifth place with 56 points. 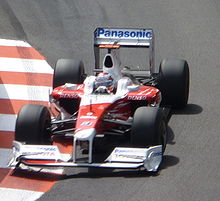 Trulli at the 2009 Monaco Grand Prix

This trend was initially continued at the beginning of the 2009 season . After two third places in Australia (Trulli) and Malaysia (Glock), Trulli took pole position and the fastest race lap in Bahrain , but was only able to finish the race in third place. After that, however, the team rarely managed to score. At the end of the season, however, they were able to take two second places in Singapore and Japan . In Japan, Glock had a serious accident in qualifying, so that he had to be replaced in the last two races by previous test driver Kamui Kobayashi . In the last race of the season in Abu Dhabi, he surprisingly managed to move from twelfth place on the grid to sixth place.

On November 4, 2009, Toyota announced that it would put its Formula 1 program on hold and concentrate on its core business. In the total of 139 Grand Prix participated, Toyota achieved 278.5 points (2.0 points / race), with most of the points achieved per Grand Prix (13) at the 2005 Bahrain Grand Prix (Trulli on second, Schumacher on fourth place).

Entrance to the factory premises of Toyota Motorsport GmbH in Cologne

During a raid on October 30, 2003 at the Toyota Formula 1 headquarters in Cologne on suspicion of industrial espionage by Toyota at Ferrari , their aerodynamics software "Elab" was found. Toyota's own program called "Template" is said to have turned out to be inadequate, so that Angelo Santini, who was poached by Ferrari in autumn 2001, via the then chief designer Gustav Brunner , persuaded the chief aerodynamicist Rene Hilhorst to install the Ferrari program. The company "Toyota Motorsport GmbH" denies knowledge, nor was it investigated against the GmbH for industrial espionage. In addition to Santini, Brunner and Hilhorst, those responsible and confidant are said to be the then team boss Ove Andersson . Santini was on trial over the Modena case , Gustav Brunner was dismissed for alleged restructuring and denies any knowledge of the aerodynamics program. This is said to have been protected with an indelible Ferrari emblem - the jumping horse. The reason for the presumed industrial espionage should have been the unsuccessfulness of the 2002 model, with the successor TF103 the external resemblance to the old Ferrari winning model was so clear that people in the industry talked about a copy.

Toyota as an engine supplier

After the operation had previously been restricted to its own works team, from 2005 Toyota also equipped customer teams with engines. The background to this was that the changes in the technical F1 regulations introduced in 2004 with regard to the required durability of the engines at Toyota had resulted in an oversupply of aggregates, which now allowed engines to be handed over to other teams. The first engine customer was the Jordan Grand Prix , which however could hardly achieve any notable success with the Toyota engines. That didn't change in 2006 either, when the team was renamed the Midland F1 but retained the engine contract.

In the 2007 season, Williams competed with Toyota engines and was more successful with it. Nico Rosberg and Alexander Wurz regularly scored points. The highlight was Wurz's third place at the Grand Prix of Canada of the year, and in the end result Williams was able to clearly outperform the Toyota works team, which was disappointing this year. The partnership between Williams and Toyota continued in 2008. Here, too, the Williams drivers, for whom Kazuki Nakajima had replaced Wurz, were able to achieve numerous points and even podium positions. In the end, however, the Williams team was left behind in the constructors' championship compared to the stabilized works team. In 2009 a different picture emerged: Nico Rosberg was able to achieve more consistent results than the Toyota drivers Trulli and Glock. Kazuki Nakajima, however, disappointed and could not achieve a single point placement, so that Williams in the end again ended up behind the Toyota factory team.

With the withdrawal of the works team after the 2009 season, the availability of Toyota engines also ended. Williams started using Cosworth engines again from the 2010 season .

All Toyota Racing drivers in Formula 1

Overview of the last staff