Zorneding [ ˈʦɔʁnədɪŋ ] is a municipality in the Upper Bavarian district of Ebersberg .

Zorneding is located in the Munich region in the foothills of the Alps , on the border of the Munich gravel plain and the Ebersberger forest . It is around 12 km to the district town of Ebersberg , 7 km to the A 99 (junction Haar ) and around 42 km to Munich Airport .

On the south-eastern edge of the municipality are barrows from the Hallstatt period 2,600 years ago.

Zorneding was first mentioned on September 4, 813 as "Zornkeltinga" in the Freising traditions . The "anger" contained in the place name comes from dragging, in the sense of clearing and indicates that the village is a clearing island .

Pöring, with the districts of Ingelsberg and Wolfesing, is a clearing settlement of the 6th / 7th centuries. Century. Row graves from the 5th to 8th centuries, which were found in Ingelsberg at the beginning of the 20th century, indicate a settlement. However, the finds are lost. In 1959, a Bavarian male grave from the second half of the 7th century was found on Kapellenberg in Zorneding . In the year 885 "Peringan" was first mentioned as a royal property in the Hochstiftsliteralien of Passau . The first records of a church in Zorneding can be found from 935. It was a noble church owned by Count Eberhard von Ebersberg , who owned Zorneding and Pöring. In 1156 "Ingoltesperch" (settlement on the mountain of an Ingolt) is mentioned for the first time in the Falkensteiner Codex and in 1269 "Wolfizzingen" in the Herzogurbar. The old Post and Salzstrasse (today Münchner Str./Wasserburger Landstrasse) gained further importance after Munich was founded in 1158. Ludwig V , Duke of Upper Bavaria, Margrave of Tyrol and Brandenburg , died in 1361 while hunting in Zorneding. The Zornedingen coat of arms goes back to him. 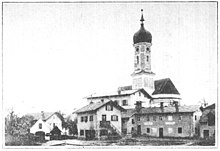 Zorneding with the Church of St. Martin in the background before 1900

Zorneding with cath. Church of St. Martin, from the southwest, 2014

Pöring with cath. Church of St. George from the north, May 2016

Between 1538 and 1555 the "High House", the noble seat of Berhardin Moser was built in Wolfesing and in 1560 the places of the community were first shown on a map, the Big Map of Bavaria , by Philipp Apian . In 1607, the community of Zorneding built a two-story house for Bader and the Guardian in today's Bucher Strasse, which in 1666 is known as the “Prandstatt”. In the Thirty Years War (1618-1648) the villages of Zornedings become victims of the Swedes . Up until the end of the 17th century, epidemics and famine prevailed, which, in addition to the warlike events, reduced the population. In 1652 a parish visit protocol in Zorneding mentions a "Ludirector", a teacher who teaches the children among other things church Latin. In 1679, the Imperial Post Office operated by Thurn and Taxis set up course no. 5 from Munich to Salzburg as the “Riding and Traveling Post” , which also went through Zorneding. In 1748 a taxis for the imperial imperial post office was to be added in the village, the origin of the Gasthof zur Post. In 1696 St. George's Church in Pöring was built in place of the old Gothic church. Today's St. Martin's Church in Zornedings was built between 1719 and 1723. Only the lower part of the tower still dates from the Gothic period. By 1729, the Zornedinger clearing island reached its current extent to the south and southeast. In 1750 the Wolfesing main team was incorporated into the Pöring main team.

In 1802 the first school house for 60 to 70 children was built. In 1815 the main team Ingelsberg came to Pöring, which now formed its own municipality. In 1828 almost the entire upper village, a third of Zornedings, fell victim to a fire. Even the use of the fire brigades in Ebersberg, Grafing, Parsdorf and Egmating could no longer save the 18 houses. In 1835 there were a total of 64 houses in the municipality of Zorneding, in which 62 families lived. 48 families live in the municipality of Pöring. In 1867 a new building replaced the old school building. Today it is the house of the clubs. The Ingelsberg Chapel is built in 1868/69. With the new railway line from Munich to Rosenheim, Zorneding got its own train station in 1871. The place is also connected to the telegraph network. The Zorneding Volunteer Fire Brigade was founded in 1873, 45 years after the great fire. Three years later, the Pöring volunteer fire department was established. In 1893 maypoles were erected for the first time in Zorneding and Pöring. In the same year, a water pipe from the Moosach headwaters to Zorneding is completed, the following year Pöring is connected to the Zornedingen water pipe network and Ingelsberg also receives a water pipe.

In 1901 a second school building was built in Zorneding on Rosa-Schöpf-Straße and in 1909 the first school in Pöring. A year later, Zorneding was connected to the power grid and received electrical street lighting. The telephone network also reached Zorneding, Pöring and Wolfesing in 1910. The Wasserburger Landstrasse was tarred in 1930. In 1935 the main street was straightened, which meant that the Gasthof zur Post moved away from it. Two courtyards had to give way to the new street layout.

On April 30, 1945, Zorneding's town center was attacked by a low-flying aircraft. A farm and the fire station were destroyed and all files of the municipal administration and the municipal archive were also burned.

In 1962/63 Zorneding was connected to the natural gas supply. In 1963 Zorneding and in 1964 Pöring received a new school. From 1971 the new settlement was built on Daxenberg and in 1972 the S-Bahn traffic to Munich started. On May 1, 1978, on the occasion of the Bavarian regional reform, the previously independent municipality of Pöring was dissolved and its main part was combined with Zorneding to form one municipality. The district of Baldham-Kolonie was given to the neighboring community of Parsdorf , today's community of Vaterstetten . In 1987 the new town hall, the clubhouse and the sports stadium were inaugurated. In addition, the western bypass of Zorneding (ST 2081) and the connections (Lärchenstrasse and Baldhamer Strasse) were completed and the Birkenhof built.

In the local discussion about the refugee crisis there was a scandal at the end of 2015 due to xenophobic statements by two CSU local politicians. Both had to give up their partisan offices in the course of the following months, one also left the municipal council. The case caused a stir nationwide and hit the headlines again when the local pastor Olivier Ndjimbi-Tshiende , who came from the Congo and who had publicly criticized the two politicians, left the parish in early 2016. He had received death threats several times in the mail. 3,000 angry people had demonstrated at a solidarity rally for the pastor to remain in the community. In June, a man from Munich who had written the threatening letters was arrested.

The professional first mayor is Piet Mayr (CSU). He has been in office since May 1, 2008. In the 2008 election he narrowly prevailed against Helmut Obermaier ( Bündnis 90 / Die Grünen ) in a runoff election, and Mayr was confirmed in the 2014 and 2020 local elections . His predecessor in office was Franz Pfluger (CSU).

The coat of arms of Pöring consists of two silver tips and a yellow partridge on a blue background. It symbolizes the owners of the Pöringer noble seat.

The village of Zorneding with the maypole and church

Many hiking and biking trails in the Ebersberger Forest .

The district of Zorneding is on federal highway 304 . On June 7, 2005 the groundbreaking ceremony for the construction of a southern bypass was made. The 4.2 km long route was opened to traffic on July 3, 2007. After bypassing the village, the traffic load of the local drive through has reduced from over 20,000 vehicles per day to around 4,000 vehicles per day.

The Munich – Rosenheim railway runs through the municipality of Zorneding north of the town center . The railway line was opened on October 15, 1871, at the same time the Zorneding station went into operation. Due to its important role as a long-distance route to the south and south-east, the railway line to Rosenheim was expanded to double tracks as early as 1892. In 1897 the eastern suburban railway network of the city of Munich was expanded, so that the trains went to Munich more often and living in the Munich area became more attractive. The line was electrified in 1927, and Zorneding station was only connected to Munich and Grafing by simple passenger trains, despite the numerous express trains on the line . Since the start of the Munich S-Bahn network, there has been a 20-minute cycle from Zorneding to Munich. Until the 1990s, regional trains in the direction of Rosenheim stopped in the station in addition to the S-Bahn . Today the station only has a central platform for S-Bahn traffic. The original station building was demolished in early 2009.

The community of Zorneding is part of the Munich Transport and Tariff Association (MVV). The municipality is connected to the following two bus routes of the transport association: 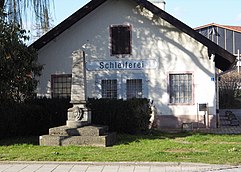 In the southern forest area of ​​the community there are two wells that supply Zorneding and the communities to the north with water. The supply is handled by a municipal company that is supported by several municipalities.

The community's wastewater flows into the large sewage treatment plant in Neufinsing, where it is clarified and flows into the Isar via the Middle Isar Canal near Moosburg .

Zorneding has a community library and a youth club. The youth club is located next to the Zorneding elementary school, opposite the town hall.

The community houses the Zorneding elementary school with its two locations in Zorneding and Pöring. The school, which celebrated its 350th anniversary in 2004, was a primary and partial secondary school for a long time, but grades 5 through 8 were gradually discontinued until 2005.

Zorneding has two volunteer fire departments. FF Zorneding, which owns a turntable ladder vehicle, and FF Pöring, which has a training facility for contact wire earthing.

Zorneding is the title of a short story by the South Tyrolean author Kurt Lanthaler .

Until 2011, Saif al-Arab al-Gaddafi , the second youngest son of the Libyan dictator Muammar al-Gaddafi , was registered in Zorneding. Here he was temporarily employed by a local construction machinery company.

Municipalities in the district of Ebersberg