The Braunschweigische Staatsbank was the oldest forerunner of today's Norddeutsche Landesbank . 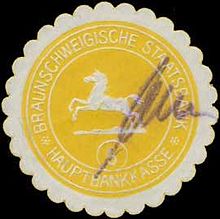 Mortgage Pfandbrief for 1000 gold marks from the Braunschweiger Staatsbank from August 1, 1930

The Braunschweigische Staatsbank was founded by Duke Karl I of Braunschweig-Lüneburg on March 9, 1765 as the Ducal Leyhaus , making it the very first state bank on German soil. Its foundation was based on the economic policy of mercantilism , as was that of the state fire insurance company in 1754 or the Fürstenberg porcelain factory in 1747.

The business area of ​​the bank coincided with the territory of the Principality of Braunschweig-Wolfenbüttel and its successors, the Duchy of Braunschweig and the Free State of Braunschweig . After the end of the First World War and the transformation of Germany into a republic, the legal basis for the Herzoglich Braunschweig-Lüneburgische Leihhausanstalt and its organization had to be adapted to the new circumstances. In 1919 the State Bank Act, largely conceived by Finance Minister Emil Bartels , was enacted. The bank was now called the Braunschweigische Staatsbank with the following bodies :

The time of National Socialism also had an impact on the State Bank. Werner Küchenthal , Braunschweig Prime Minister (October 1, 1930 to May 7, 1933) and a member of the NSDAP since May 1, 1933, was appointed President of the State Bank to succeed Oskar Stübben . Politically unpopular bank directors were dismissed, new employees were hired, whose primary qualification was party membership. According to the presentation in the commemorative publication for the 250th anniversary of the Landessparkasse, the Braunschweig Prime Minister Dietrich Klagges instrumentalized the bank to prevent the Free State of Braunschweig from being merged with other areas - and thus a loss of power: the bank opened 10 branches in Prussian territory in the summer of 1934 namely in Celle , Gifhorn , Goslar , Göttingen , Halberstadt , Hildesheim , Lüneburg , Peine , Stendal and Uelzen . In 1934 the State Bank Act was realigned in line with the Führer principle . According to the economic historian Achterberg, the changes in the appointments of the supervisory board and administrative board members "led to the submission of the board of directors to the state ministry". In 1935 the (Reich) law on state banks was enacted. It contained blank authorizations to intervene in state banks and their (state law) legal bases including the authorization in § 2, according to which the Reich Minister of Economics can take over the supervision of state banks. Achterberg writes:

“This centralization of the state bank supervision represented an organizational change of the greatest importance, because the Braunschweig State Ministry and with it the state of Braunschweig had been completely complimented out of the organs of the bank. The administrative and supervisory board disappeared completely, in return the bank received an advisory board, which was appointed by the Reich Minister of Economics for three years each. .... It was also passed that the Reich Minister of Economics appoints the President and the members of the board of directors of the State Bank and is the superior of the President. Of course, the state bank was only withdrawn from regional powers, it remained subject to the central authorities ... "

The change of area in 1941 did not lead to changes in the operational area of ​​the State Bank. The division of Germany , however, resulted in the loss of the former Braunschweig area, which was in the Soviet occupation zone . That also applied to the state bank.

With the establishment of the state of Lower Saxony , the assets of the predecessor were transferred to this state, so it became a shareholder and guarantor of the state bank. Their independence remained until mid-1970.

In 1834, savings banks were founded in the Duchy of Braunschweig as legally dependent subdivisions of the ducal pawn shops (“Law on the savings banks to be established in connection with the ducal lending institutions” of December 20, 1833). In 1919, the savings bank business was concentrated in the newly established Braunschweigische Landessparkasse. This was a “public institution with independent legal capacity and its own assets, Girozentrale for the state of Braunschweig. Serves to maintain savings traffic. Asset and business management by a main savings office under the direction of the State Bank's directorate . “Whether the Braunschweigische Staatsbank can call itself the oldest German savings bank in view of its founding date in 1765 or whether it has only been possible to speak of a savings bank function since 1834 is controversial.

The number of branches has changed over time. Based on corresponding sources, information on the dates 1929 and 1965 is given below:

In addition to the head office itself, the bank in the city of Braunschweig had the main cash desk, the main finance office and the district cash office in Braunschweig (all at Dankwardstrasse 1). There were also branch offices in Bad Harzburg , Blankenburg , Braunlage , Eschershausen , Gandersheim , Hasselfelde , Helmstedt , Holzminden , Königslutter , Oker , Schöningen , Seesen , Thedinghausen , Vorsfelde and Wolfenbüttel . At the branch offices there were subsidiary departments for the state treasury with the designation Kreiskasse. In addition, the Braunschweigische Landessparkasse (with the main savings office also in Dankwardstrasse 1) maintained 4 official and 16 private savings centers within the city of Braunschweig and 223 savings centers in the state of Braunschweig.

In addition to the head office in Braunschweig (most recently in the old station - also Ottmerbau ) it had the following branches in 1965 :

The branches included branches in the cities mentioned and in the following locations:

On July 1, 1970, Lower Saxony's finance minister and later Prime Minister Alfred Kubel initiated the founding of NORD / LB based on proposals from State Bank President Carl Düvel . The former syndic and chairman of the board of directors of the Niedersächsische Landesbank Girozentrale and then the NORD / LB, Wilhelm Pracht , accompanied the negotiations for the merger of the Hannoversche Landeskreditanstalt with the Niedersächsische Wohnungskreditanstalt Stadtschaft, the Niedersächsische Landesbank Girozentrale and the Braunschweigische Staatsbank to form NORD / LB. The newly founded bank therefore moved to Hanover and Braunschweig. She resides there with the Braunschweigische Landessparkasse u. a. in the architecturally significant old station. With the merger, the Landessparkasse lost its legal independence, but not its name and its function as a Landessparkasse.

By a state treaty dated August 22, 2007 between Lower Saxony, Saxony-Anhalt and Mecklenburg-Western Pomerania, the Braunschweigische Landessparkasse, which no longer had legal independence after the merger in 1970, became a public law institution with partial legal capacity within the NORD / LB institution redesigned.