Linkenheim-Hochstetten is a municipality in the Karlsruhe district in Baden-Württemberg . It is located about 15 kilometers north of Karlsruhe .

Prehistory, the Roman Empire and the Early Middle Ages

The earliest settlement of the district Linkenheim-Hochstetten is probably already in the Neolithic back. Two stone artifacts can serve as evidence of early human activity . The first is an amphibolite stone ax , which was found in 1985 in Hochstetten. In 1993 another stone ax made of greenish silite stone was found in the east of the Linkenheim district. What is special about it is its origin. This type of rock originally comes from the southern Black Forest or the slate mountains . Stone axes, however, are not the only evidence of the Neolithic. From the lakes pipe and Streitköpfle a variety of antler picks and other bony artifacts are known.

There are only a few finds from the Bronze Age , including a bronze edged ax , which was found in the Hardtwald west of Linkenheim. The piece can be viewed today in the permanent exhibition of the Baden State Museum .

Two pieces from the Rohrköpfle quarry pond are known of the vase-headed needles typical of the urnfield period.

A special piece from the younger pre-Roman Iron Age is an ornate belt hook made of bronze, which was part of the Celtic women's costume.

So far, the legacies in the Linkenheim-Hochstetten district have been limited to single or lost finds. From the Roman period , however, remains of settlements and other buildings can be identified for the first time. A Roman road runs east of the double community in the Hardtwald in a north-south axis . It is a wall made of earth and gravel that can still be seen in the area today and is still up to 50 cm high. The construction of this road was initiated in 74 AD by Emperor Vespasian . The road led from Offenburg via Ladenburg ( Lopodunum ) to Mainz ( Mogontiacum ) as the capital of the Roman province of Germania superior .

The Roman presence under the rule of Vespasian is evidenced by the Roman road and a denarius with his portrait from the Rohrköpfle quarry pond. In addition to other coins 96 here Roman found Primers (for example, knee primer), a golden earring, finger ring fragments (some with inscription) and several bronze vessels, including a casserole , a bowl and a Hemmoorer bucket .

North of the municipality of Hochstetten, under today's industrial area, directly on the edge of the Gestadtekante, Albrecht Bonnet discovered a small settlement of four huts in 1898, which was excavated between 1898 and 1900 . According to Bonet, these are huts that were partly sunk into the ground and reached a size of up to 3.80 m × 2.10 m. The ceramic finds testify to the long period of settlement in the settlement, which is probably related to the convenient location. It is possible that the settlement controlled a ferry crossing over the Rhine via which pottery from Rheinzabern ( Tabernae ) reached the area on the right bank of the Rhine.

The latest finds show that this small settlement apparently continued to play an important role in the early Middle Ages . After a small hiatus after the Romans left in the 4th century, the settlement seems to have been repopulated in the late 7th century. This is evidenced by pieces from the early, older yellow turntable ware , a type of ceramic that is widespread on the left and right of the Rhine and in the central Neckar area . The fine-toned texture and certain decors of the Hochstetten pieces suggest they come from pottery in northern Alsace .

In addition to these finds of the older yellow turntable ware, a silver denarius from Emperor Ludwig the Pious , son and successor of Charlemagne , brought further evidence of post-ancient settlement . This Denartyp was introduced 822 n. Chr. Of Louis the Pious, who was forced by increasingly frequent forgeries to the previous type multiline Münzstättennamen and imperial title as disreputable . In all likelihood, the denarius is from the mint of Dorestad , a major Carolingian trading center in the northern Netherlands . It is the first relevant find on the Upper Rhine. An excavation by the Karlsruhe Regional Council (Section 26: Archaeological Monument Preservation) in 2008 revealed further building floor plans and confirmed the suspicion of a medieval settlement.

In the pipe head there were also some impressive pieces from the early Middle Ages, including parts of horse bridles , such as two slanted iron stirrups with fine inlaidation of silver. Another silver denarius was recovered from the Cologne mint here.

The first documentary mention left home can be found in 777 in a goods classification of Lorsch .

Linkenheim originally had a purely rural structure. An economic boom began during the industrialization of the German Empire , as many jobs were created primarily in Karlsruhe. From then on the population increased steadily.

In 1827 the course of the Rhine near Linkenheim was corrected in the course of straightening the Rhine from the mouth of the Lauter to Roxheim . The earlier Rhine loops can still be clearly seen on satellite images and are partially preserved as bodies of water in the form of bathing and fishing lakes.

Hochstetten was initially also a purely rural village. However, the proximity of the city of Karlsruhe prompted the farmers to specialize in growing vegetables and tobacco early on . Before the First World War , the place was known for growing asparagus .

The final change from the former farming and workers' village to today's residential community began in the period after 1945. This was initiated and promoted by the establishment of the furniture factory (beekeeping supplies and kitchen furniture) "Husser".

On January 1, 1975, the previously independent communities Linkenheim and Hochstetten merged to form the new community Linkenheim-Hochstetten. The merger took place in the course of the municipal reform in Baden-Württemberg .

In 1989 the municipality received a connection to the public transport network of the city of Karlsruhe ( KVV ) with the tram (line S1 / S11 ). 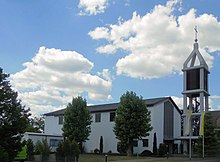 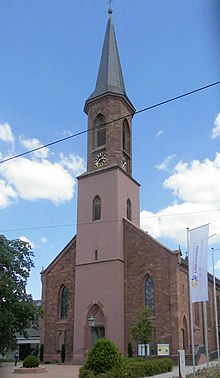 In the district of Linkenheim there is the Maria Königin church of the Catholic parish Linkenheim / Dettenheim , a Protestant church , a parish of the Liebenzell Community Association and a New Apostolic Church . Hochstetten has a Protestant church and one of the oldest free Protestant communities in southern Germany. Regional church communities play a major role. The YMCA Linkenheim and Hochstetten belong to the most important associations of the YMCA in the whole area due to their youth work. In 2006 the charismatic "czhardt" was founded. This also roughly reflects the distribution of denominations: there are more than twice as many Protestants as Catholics. In 2000 Germany's first Easter garden opened in Linkenheim-Hochstetten .

The municipality council has 18 honorary members who are elected for five years. In addition, the mayor acts as the municipal council chairman with voting rights.

Blazon : "In blue with a golden inboard, a golden boatman's pole and a golden oar crossed diagonally ."

Linkenheim-Hochstetten has been twinning with Jarny in France since May 29, 1966 . Since September 14, 1990 there has been a partnership with the city of Gröditz in Saxony , which began informally (first meeting of the mayors) in 1984.

The community is located on federal highway 36 ( Mannheim - Lahr / Black Forest ). In addition, operating on the Hardt web to which has a total of seven stations in the municipality, Karlsruhe , the S1 and the S11 of the rail Karlsruhe . In addition, the place has a small airfield ( special airfield Linkenheim (EDRI) ) for small aircraft . But large transport planes have already landed.

In terms of leisure facilities, there is the Vogelpark Linkenheim, which is privately operated by an association and founded in 1974 and currently (2018) has around 70 species.

The FV Linkenheim plays since the 2010/2011 season back in the county league. The FV Hochstetten again plays in the district class A. A sporting highlight for the FV Linkenheim is the annual U19 Indoor Cup.

The HSG Linkenheim-Hochstetten-Liedolsheim , also called Hardttigers, consists of the three old handball departments of TV Linkenheim, TV Liedolsheim and TV Hochstetten. HSG Li-Ho-Li has been playing in the regional league since the 2017/2018 season.

The equestrian group (RSG) Linkenheim-Hochstetten has existed since 1979. For a long time, tough tournaments were held in Linkenheim on the Hubertushof Baden facility. Riding lessons in dressage and jumping as well as vaulting and therapeutic riding are offered at the riding facility .

Cities and municipalities in the district of Karlsruhe