Okinawa is a redirect to this article. Further meanings are listed under Okinawa (disambiguation) .

The Okinawa Prefecture ( Jap. 沖縄県 , Okinawa-ken , Okinawaisch Uchina ) is Japan's southernmost prefecture . It includes the island groups Okinawa , Miyako and Yaeyama belonging to the Ryūkyū Islands . Okinawa Prefecture is therefore to be distinguished from the island group of the same name and its main island Okinawa Hontō . The latter was formerly the center of the Kingdom of Ryūkyū and is located a little over 500 kilometers southwest of the Japanese main island Kyūshū . Yonaguni Island at the southwestern end of Okinawa Prefecture is only 125 kilometers from Taiwan .

There are 363 islands or 160 islands of at least 1 hectare in the prefecture, 49 of which are inhabited. See Okinawa Prefecture Island List for a listing .

The highest mountain is the 526 m high Omoto-dake on Ishigaki-jima .

On Okinawa and the surrounding archipelagos, languages ​​and cultures were able to develop, as Okinawa belonged to the Kingdom of Ryūkyū ( 琉球 , Ryūkyū ), which lasted until 1879.

However, the Ryūkyū languages spoken in Okinawa , also known as Uchinaguchi , are only used by older residents. Most young residents prefer the Japanese language , although an Okinawan dialect remains. This is particularly evident in vocabulary that is only used locally. Nevertheless, attempts are being made through popular music (such as the Okinawian band Begin ) as well as radio and television broadcasts in the Ryūkyū language to encourage young people to learn and use it actively.

The Battle of Okinawa in 1945 was one of the last major battles in World War II , killing an estimated 120,000 people. As a result of the Second World War, the island was occupied by the USA .

During the occupation, attempts were made to form a "State of Okinawa" or the "Republic of the Ryukyus" that was independent of Japan. Even joining as a US state, like Hawaii, was considered before the Korean War . Japan got the island back on May 15, 1972, but more than 20% of the island's territory remained US military territory.

The G8 Economic Summit 2000 took place on the island of Okinawa from July 21 to 23 under the Japanese presidency. Okinawan motifs were used to reissue 2000 yen bills at that time.

The main building of the Prefectural Administration in Naha 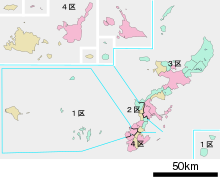 Since its return to Japanese sovereignty in 1972, Okinawa's political landscape has been shaped by the US military presence and the debate over the US-Japanese security treaty. For a long time, the left parties worked together in a united front in national elections: the Communist Party of Japan (KPJ), the Social Democratic Party (SDP), the "Socialist Mass Party Okinawa" ( Okinawa Shakai Taishūtō , Shadaitō for short ), which under the US A military government emerged and continues to exist as a regional party , and the Democratic Party recently nominated candidates together in the upper house election in 2007 and in some cases in the lower house election in 2009 before the Democrats took over the central government and, after breaking their election promise to reduce the military presence, entered into violent opposition by the left parties Faced Okinawa.

Former LP Lower House MP Denny Tamaki has been Governor of Okinawa since October 2018 . In the early gubernatorial election on September 30, 2018, he opposed the Pentagon's planned restructuring of the bases within Okinawa with support from the national center-left opposition with around 55% of the votes against the former mayor of, who was supported by the national governing parties Ginowan, Atsushi Sakima, and two other candidates through. The turnout fell slightly compared to the 2014 election to 63.2%, but could have been affected by Typhoon No. 24 (international Typhoon Trami). Predecessor Takeshi Onaga , also from the camp of the base opponents, had died in office.

The Okinawa prefectural parliament has 48 regular members and is one of six prefectural parliaments that are not elected by unified regional elections. In the last elections in June 2020 , the Liberal Democratic Party (LDP) was able to gain seats and, with 17 of the 48 seats, remained clearly the strongest single party; But the "prefectural government parties" - since the governor is directly elected, he does not necessarily have to rely on a fixed majority in parliament - defended with 25 seats (KPJ 7, SDP 4, Shadaitō 2, KDP 1, the governor supporting Independent 11) a majority. The turnout fell to 46.96% and was thus below 50% for the first time in the prefecture parliament elections.

In the national parliament, Okinawa is represented by four members of the lower house and two in the upper house , after the elections in 2016 , 2017 and 2019 currently (as of August 2019):

Okinawa is known as the birthplace of the martial arts Karatedō (hist. Tōde, okin. Tōdī) and Kobudō .

Also comes Eisa , a kind of drummers and dance group from Okinawa. Almost every island has its own Eisa troop and its own arrangements. The actors are pupils, students and young adults between 15 and a maximum of 25 years. Both boys and girls enjoy this traditional and extremely popular spectacle.

The Japanese island of Okinawa is considered the region with the highest life expectancy in the world. It is also known as the "island of the centenarians". Okinawa is one of three places in the world with the highest number of centenarians per population. Average life expectancy, at 86 years for women and 78 years for men, is higher than in the rest of Japan, which already holds a leading position in global statistics. A scientific study by Ryūkyū University confirms that the elderly are in an above-average state of health. The risk of developing cardiovascular diseases, strokes, cancer and diabetes is significantly lower for people who live the traditional way of life than in western industrialized nations. In the age group between 20 and 60, on the other hand, the statistics show the opposite effect: Here, people are thicker and sicker than in the rest of Japan, which the researchers attribute to, among other things, the introduction of American-influenced eating and living habits.

In a new survey in 2013, Okinawa had to relinquish the first position in the age statistics, which is based mainly on the longevity of women, to Nagano Prefecture and fell to third place. 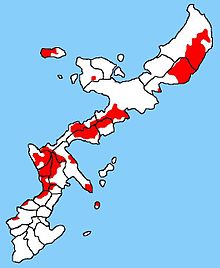 Since the end of World War II there have been several US military bases on Okinawa, including Kadena Air Base and Camp Foster , with a total of 26,000 US soldiers (as of 2018). Okinawa is therefore also known as the "unsinkable aircraft carrier" of the USA. Almost all of the 14,460 marines stationed in Japan are in Okinawa.

Giving up Okinawa completely as a base, as many locals demand, is hardly an option for the USA for geo-strategic considerations. The proximity to Taiwan is particularly relevant here should the Taiwan Relations Act come into effect . The US Navy is currently planning to build a submarine base. However, the selected stretch of coast is in a nature reserve, which is a port of call for the endangered marine mammal Dugong and other threatened species.

Departure boards in airports in the People's Republic of China and the Republic of China (Taiwan) as well as monitors in the aircraft of corresponding airlines still show 琉球 ( Ryūkyū , Pinyin : Líuqíu), not 沖 縄 (Okinawa). 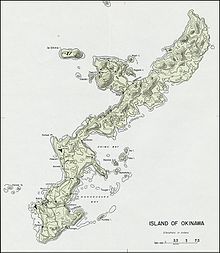 The main island of Okinawa Hontō

In the table below, the five districts ( 群 Gun ) are shown in italics, below each (indented) the eleven small towns ( 町 Chō ) and the 19 villages ( 村 Son ) therein. The first three digits of the code (1st column) also show a relationship between the rural district and the small town; the code here always ends with the number zero. At the beginning of the table are the eleven independent cities ( 市 Shi ).

Naha, is the seat of the prefecture administration and at the same time a Chūkakushi ("core city").