Ashgabat [ aʃʁaˈbat ], German  Ashgabat ( Turkmen from Persian عشق‌آباد Aschq Abad , DMG ʿAšq-Ābād , 'residence of love'), formerly also Aschchabad from Russian Ашхабад , is the capital of Turkmenistan and with around 791,000 inhabitants (as of 2017) also the largest city in the country. Administratively it forms its own district, the Aşgabat şaheri . Ashgabat is located in an oasis in the Karakum desertat the foot of the Kopet-Dag mountainsnear the border with Iran .

The city is located near the ancient city of Nisa and is an important industrial location ( mechanical engineering , electrical engineering , textile, food industry). Ashgabat also has a cultural center with a university, colleges, theaters, museums and a zoo. Ashgabat is located on the Karakum Canal and has an international airport .

Ashgabat has a continental climate with hot, dry summers and cold, humid winters.

The majority of the city's population consists of Sunni Muslims . There is also a Christian minority and a Baha'i minority that used to be very important .

The population is expected to rise to more than one million by 2035. 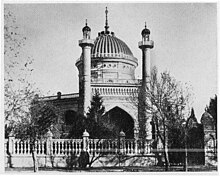 The former house of prayer

The city of Ashgabat developed around a Russian military base that was built in 1881 at the intersection of several caravan routes . After the connection to the Trans-Caspian Railway , which connected Central Asia with the Caspian Sea from 1885 , the city expanded continuously. From 1919 to 1927 it was called Poltorazk .

In 1925, Ashgabat became the capital of the Turkmen Soviet Socialist Republic within the Soviet Union . In a severe earthquake on October 6, 1948 , the city was almost completely destroyed; over 100,000 people were killed. In the period that followed, Ashgabat was rebuilt. In 1962 the city was connected to the Karakum Canal . This canal , one of the longest in the world, is fed by the Amu Darya River, which runs about 600 kilometers to the east .

As early as 1902, the foundation stone was laid in Ashgabat for the world's first house of worship for the Baha'i . Completed in 1908, it was forcibly converted into an art gallery in 1938 and demolished in 1963. In 1950, today's Turkmen State University was founded in the city.

With the independence of Turkmenistan from the Soviet Union on October 27, 1991, Ashgabat became the capital of the sovereign state. Since then, Ashgabat has undergone extensive redesign; the population also rose to just under 800,000. 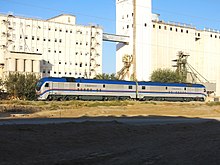 Trans-Caspian Railway in front of the Ashgabat cement factory

The next border crossing with Iran is 35 kilometers south of Ashgabat on the 1700 meter high road pass near Bajgiran .

The Ashgabat cable car has been operating since 2006 .

Most of the older buildings were destroyed by the 1948 earthquake. That is why the oriental old town quarters typical of other Central Asian cities are missing . The center of Ashgabat is characterized by buildings made of reinforced concrete and glass, which are largely earthquake-proof .

In the years since independence, a rapidly growing new center has emerged east of the former Soviet city center. It is characterized by large, monumental buildings, wide boulevards and extensive green spaces and parks. Along the approximately six-kilometer-long Bitaraplykstraße, from the western center to the neutrality tower in the southwest, high-rise buildings for government, hotels (see Ýyldyz ), offices and luxury living are lined up . The large number of richly modeled fountains is striking.

The Museum of Fine Arts, the Museum of Regional Studies and the Historical Museum are well worth seeing. A statue of Lenin on a base made of carpet patterns comes from the Soviet period . The botanical garden is the most important of the many green spaces, with a collection of native and exotic plants. Other important parks are the complex around the Independence Tower and the park commemorating ten years of independence (10 Yil Garaşsyzlyk). The Ertuğrul Gazi Mosque was built in 1998. The 2003 Olympic Stadium has a capacity of 30,000 spectators.

Ashgabat is a center of Turkmen handicrafts , especially hand-woven carpets . These can be seen in particular in the Turkmen Carpet Museum .

Parts of the cityscape are shaped by the personality cult of the former head of state Saparmyrat Nyýazow . The 95-meter-high arch of neutrality , which was moved from the center of the city to the south-western outskirts in 2010, is crowned by a gilded statue of the dictator. The largest park in the city and a popular destination is the Independence Park. The Ruhnama Monument is also located in this park . This pays tribute to the Ruhnama , a book by Nyyazov, which was considered required reading for the people. In addition, the independence monument is an opulent reminder of the independence of Turkmenistan on October 27, 1991. The current Turkmen President, Gurbanguly Berdimuhamedow , also leaves his mark on the cityscape, including the more than 20-meter-high Berdimuhamedow monument in the city center. In 2011 the 211 meter high TV tower Türkmenistan teleradio merkezi was opened. In the same year the Oguzkhan Presidential Palace , which serves as the new official residence of the Turkmen President, and, on the occasion of the 20th anniversary of the introduction of the Turkmen Constitution, the constitutional monument , were completed.

The Halk Hakydasy memorial complex has existed since 2014. With the bicycle monument , another large monument was opened in the Turkmen capital on the occasion of World Bicycle Day on June 3, 2020.