Bressuire is a French municipality with 19,519 inhabitants (at January 1, 2017) in the department of Deux-Sèvres in the region Nouvelle-Aquitaine . It is the district capital ( sous-préfecture ) of the arrondissement of the same name and the capital of the canton of the same name .

The city has been connected to the railway network since 1866 and since then has experienced sustained population growth; Even today two railway lines run via Bressuire. More important for the economic life of Bressuire are several smaller industrial companies (canning, precision mechanics, wood processing etc.), which are located in different industrial zones ( zones industrielles ) outside the city. As a sub-prefecture of the Deux-Sèvres department, Bressuire is an important administrative and training center.

The area around Bressuire was probably settled in Celtic or Gallo-Roman times. In medieval Latin the city was called Castrum Berzoriacum ; during this time the settlement was dependent on the vice counts of Thouars . During the Hundred Years' War it stood at times between the fronts of the British and French; It was destroyed during the Huguenot Wars . Even during the Vendée uprising in the time of the French Revolution , it was fought over and was taken by both the Catholic-Royalist troops of the insurgents and by Republican-revolutionary units.

Ruin of the castle 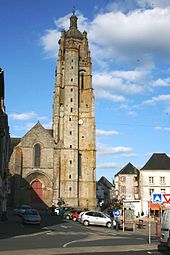 Commons : Bressuire  - collection of images, videos and audio files
Municipalities in the Arrondissement of Bressuire