The title of this article is ambiguous. Further meanings are listed under Hohndorf (disambiguation) .

Hohndorf is a municipality in the northwest of the Erzgebirgskreis in Saxony .

Panorama of Hohndorf from the south; in the background the city of Hohenstein-Ernstthal

Hohndorf is located in the Erzgebirge foothills south of the B 173 and west of the B 180 . The A 72 runs east of the community. This can be reached via the connections Stollberg-Nord and Stollberg-West approx. 15 km. The A4 runs north of the municipality. The village is located about 11 km east of Zwickau and about 20 km west of Chemnitz and 8 km northwest of Stollberg / Erzgeb.

The Stollberg – St. Egidien with the Hohndorf Mitte stop and the Rödlitz-Hohndorf stop already in the Lichtenstein area . City-Bahn Chemnitz GmbH's regional trains run every hour from Monday to Friday and every two hours on weekends via Oelsnitz / Erzgeb. to Stollberg and via Lichtenstein and St. Egidien to Glauchau . 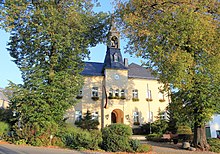 Hohndorf has an Evangelical Lutheran community.

Cities and municipalities in the Erzgebirgskreis