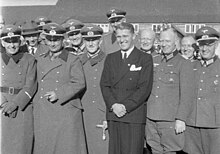 Heinz Brandt (born March 11, 1907 in Charlottenburg (now Berlin-Charlottenburg); † July 21, 1944 in Karlshof near Rastenburg ) was an Olympic champion in show jumping and a general staff officer in the Army High Command during World War II . He was one of four killed participants of the briefing in the failed July 20, 1944 assassination attempt on Hitler .

Brandt joined the 13th (Prussian) cavalry regiment of the Reichswehr in Hanover on April 1, 1925 as a flag junior . On November 1, 1926, he was promoted to NCO . November 18, 1926 to September 1, 1927 to Brandt became the I. course at the Infantry School in command, of 17 October 1927 to 16 August 1928 he commanding the II. Course at the Cavalry School Hannover . Promoted to lieutenant on December 1, 1928 , he became a rider at the cavalry school on October 1, 1930. On October 1, 1931 Brandt was transferred to the 2nd (Prussian) cavalry regiment in Tilsit , and the command of the cavalry school was extended until further notice. On December 1, 1932, he was promoted to lieutenant and on May 1, 1933, he was assigned to the special department of the cavalry school. Here he took part in the preparations for the Olympic Games in Berlin . On October 6, 1936 he was assigned to the War Academy and promoted to captain . After graduating from the War Academy, he was transferred to the staff of the 25th Infantry Division . On April 1, 1939, he became 1st adjutant (IIa) here.

On March 13, 1943, Brandt was one of Adolf Hitler's companions during his visit to the headquarters of Army Group Center in Smolensk . There the officers Henning von Tresckow and Fabian von Schlabrendorff had been working for a long time on the plan to kill Hitler by assassination. They asked Brandt whether he would take a package of explosives disguised as a Cointreau bottle on Hitler's plane - he unsuspectingly consented. But the conspirators waited in vain for the news of Hitler's fall. The package with the explosives was transported in the hold of the aircraft, where it iced up and the ignition mechanism failed.

On July 20, 1944 , Brandt took part in the briefing at the Fuehrer's headquarters in Wolfsschanze , during which Colonel Stauffenberg carried out another assassination attempt on Hitler. He pushed the briefcase with the bomb that the resistance fighter had put under the table with his foot behind a pedestal to get a better view of the spread map. Hitler was only slightly injured in the explosion, Brandt seriously. He died the next day as a result of this wound in the Karlshof military hospital near Rastenburg. Posthumously he was promoted to major general on July 22, 1944 .

In 1932 he became German champion in show jumping . At the 1936 Summer Olympics in Berlin, he won the "Alchemist" in the German team together with Kurt Hasse on "Torah" and Marten of Barnekow on "North Country" the gold medal .