Ilse Aichinger (born November 1, 1921 in Vienna ; † November 11, 2016 there ) was an Austrian writer . She is regarded as an important representative of German-language post - war literature .

Ilse Aichinger and her twin sister Helga Michie were born in Vienna as the daughters of a teacher and a Jewish doctor. Until the early divorce of her parents (1927) she spent her childhood in Linz . The mother moved back with the children to Vienna, where Ilse Aichinger mostly lived with her Jewish grandmother or in monastery schools.

The annexation of Austria meant persecution and mortal danger for the family. On July 4, 1939, Helga was able to flee to Great Britain on a Kindertransport , but the rest of the family could not follow because the war broke out. Ilse Aichinger stayed with her mother in order to protect her from deportation as the guardian of a still underage “half barbarian”. The mother lost her job, but was not actually bothered until 1942.

Ilse Aichinger lived completely isolated from the public and was denied a place at university. She and her mother were conscripted during the war years; Ilse Aichinger ran the risk of being deported and killed herself because, after reaching the age of majority, she hid her mother in one of the rooms assigned to her daughter directly opposite the Gestapo headquarters in the former Hotel Metropol on Morzinplatz. The mother's grandmother and younger siblings were abducted in 1942 and perished in the Maly Trostinez extermination camp near Minsk .

1945 Ilse Aichinger began Medicine to study, but broke off after five semesters to her partly autobiographical novel The greater hope to write. It was created “in the kitchen of a poor apartment in an outer district” of Vienna as well as in the office “of an institution for the incurable, the elderly and the deported”, where her mother worked as a doctor. The critic Hans Weigel recommended that she introduce herself and her texts to Bermann-Fischer Verlag , which eventually published her works. But even before that, Aichinger's earlier texts - published in newspapers and magazines such as Wiener Kurier , Plan , Der Turm - caused a sensation, so that, according to Hans Weigel, Austrian literature only began after 1945 with Ilse Aichinger. In 1949/50 Ilse Aichinger worked as a publishing editor for S. Fischer, in 1950/51 as Inge Aicher-Scholl's assistant at the Ulm School of Design .

In 1951 she was invited to group 47 by Hans Werner Richter for the first time , where she met her future husband Günter Eich . In 1952 she won the group's prize for her mirror story . In the same year the much-noticed speech appeared under the gallows . From 1956 to 1993 she was a member of the Akademie der Künste (Berlin West). In 1953 she married the writer Günter Eich. The couple lived with their children, Clemens , who also became a writer, and Mirjam, first in Lenggries , then in Breitbrunn am Chiemsee and, from 1963, in Großgmain in the Salzburg region . In 1967 she went on a long reading tour to the USA. In the year of his marriage to Eich, Aichinger's radio play debut, Buttons , was broadcast for the first time.

In 1957 she became a member of the writers' association PEN Center Germany .

In 1972 Günter Eich died. Nine years later, after her mother's death, Ilse Aichinger moved to Frankfurt am Main and in 1988 to Vienna, where she began to write again in the late 1990s after a lengthy creative break. She regularly won prestigious literary prizes, although her publications became fewer and shorter. In 1996 she signed the Frankfurt Declaration on the Spelling Reform and in 1997 forbade adapting her text in school books to the new rules.

In 1984 she first moved to Frankfurt am Main at the invitation of S. Fischer Verlag and then returned to Vienna in 1988.

After the accidental death of her son Clemens in February 1998, the author withdrew almost completely from the literary public. Two years later, after a 14-year break in writing, some autobiographical essays appeared in a series of weekly articles from the end of 2001 to 2003, initially for the Viennese daily Der Standard . However, in 2004 there was a break with the newspaper because of a column about the Nobel Prize by Elfriede Jelinek . In December 2004 Ilse Aichinger started working on columns for the weekly supplement "Spectrum" of the newspaper Die Presse . Some of these late texts were summarized in the book Film und Verfahrnis (2001) and the two small volumes Unbelievable Travels (2005) and Subtexte (2006).

In Vienna, where she lived until her death, Ilse Aichinger stayed almost every day in her regular café, Café Demel on Kohlmarkt, and often went to the cinema.

In 2018, Ilse-Aichinger-Gasse in Vienna- Donaustadt (22nd district) was named after her. 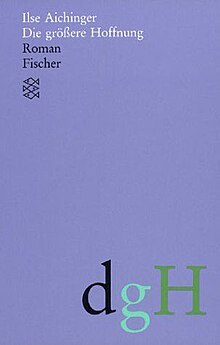 Cover of The Greater Hope , 1991 edition, based on a design by Otl Aicher

From the beginning, Aichinger called for criticism of political and social conditions in her works and spoke out against false harmony and historical oblivion. As early as 1945 she wrote a text about the world of the concentration camps (The fourth gate) , the first in Austrian literature. A year later, in the essay Call to Suspicion , she wrote : “We must distrust ourselves. The clarity of our intentions, the depth of our thoughts, the goodness of our actions! We have to distrust our own truthfulness! ”With this appeal against the repression of history and for a relentless self-analysis, Ilse Aichinger turned against German clear-cut literature , whose followers propagated a radical new beginning after the end of the Second World War.

In 1948 she wrote her only novel The Greater Hope , in which, with reference to her own biography, she describes the fate of a young " half-Jewish " under National Socialism . The Greater Hope is a book about the fact that the high hopes no longer exist. The novel does not offer a concrete-realistic representation of humiliation, fear and desperate hope, but an allegorical description in ten chronologically arranged pictures from the subjective perspective of a fifteen-year-old girl. It is not told in a chronologically comprehensible manner, the text is more of a network of dreams, fairy tales, myths and history. Monologues alternate with dialogues, authorial narration with personal. "Through the symbolic exaggeration, the horror is in no way played down, but only lifted to another level and linked with timeless topics."

The greater hope , together with Musil's Moosbrugger and Clarisse studies in Man without Qualities , is the first deconstructive and language-themed novel in Austrian literature that also deals with history.

In her early stories, which show the influence of Franz Kafka , Aichinger describes the “existential shackling of people by fears, compulsions, dreams, delusions and feverish fantasies”. The subject of the difficult relationship between dream and reality and between freedom and coercion recurs again and again, for example in the prose volume Where I Live (1963). The title story of the same name also deals with the topic of alienation and the question of autonomy and responsibility.

From the very beginning, Aichinger's work showed a pronounced tendency towards scarcity, which can be seen, for example, in the adaptation of her first and only novel The Greater Hope . The anthology Bad Words (1976) showed a change in theme for Ilse Aichinger: "Once the search for truth dominated, it now comes to subversive language criticism." Language seemed to the author more and more to be an unusable means of expression. The increasingly rare writing matched this view, and the texts became shorter and shorter, right up to the aphorism .

Ilse Aichinger herself explained this as a reaction to the lack of connections in the contemporary world: “You can't just write on and artificially create connections.” Her poetics of silence is a consequence of the rejection of any form of conformism : “Against the very common opinion of 'that's just the way it is', which unquestionably accepts what it finds. The world demands to be countered. "

About the war time

“The war was my happiest time. The war was helpful to me. What I saw was the most important thing in life for me. The war time was full of hope. One knew very well where friends were and where they weren't, something that is no longer known in Vienna today. The war cleared things up. "

“I once said […] that World War II was my happiest time. Although I saw my loved ones being dragged away in cattle wagons, I certainly believed that they would come back. That's why the time AFTER World War II was the most difficult for me, because nobody came back. "

“The sight of my grandmother in the cattle truck on the Schwedenbrücke in Vienna. And the people around me who watched with a certain amount of pleasure. I was very young and I knew that my grandmother, who was the dearest person in the world to me, was coming back. Then the war was over, prosperity broke out, and people shot past you. That was even worse than the war. "

“I've always thought [writing] to be a very difficult job. And I never wanted to be a writer. I wanted to become a doctor, but that failed because of my clumsiness. At first I just wanted to write a report about the war. I didn't even think about a book, I just wanted to record everything as precisely as possible. When the book [ The Greater Hope ] was published by Fischer, there was still far too much in it. I wanted to say everything in one sentence, not twenty. "

“Writing is not a job. Not today. The language is fragmented, one ought to know that. Robert Musil saw through this completely. But most of them write quickly in chronological order and inattentively. Defining yourself as an author alone is no longer possible today. It doesn't matter whether you are a plumber, a nurse or in the office. It's another world, even if it bores you. When someone asks me about my job, I say 'privately'. "

“The role of writing is that it may seem to me that everything has a certain meaning. If I manage two or three sentences, then I have the feeling that my existence is not completely absurd, as if there is still a spark of meaning left. "

Ilse Aichinger did not accept the following decorations and medals.