Krompachy (German Krompach , older also Krombach ; Hungarian Korompa ) is a city in Eastern Slovakia with 8,684 inhabitants (as of December 31, 2019). 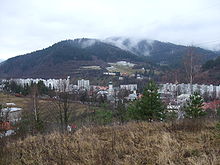 In addition to the main town Krompachy, the municipality has a district called Zemianska Strana (German noble hut ).

Krompachy was mentioned in writing for the first time in 1282 in a document from King Ladislaus IV and at that time belonged to the estate of Spiš Castle . As early as the 14th century there is evidence of copper trade, market rights and the like, but the development was constantly slowed down by constant wars or arguments. According to an agreement with the then landlord in 1602, subordinate labor was replaced by tax payments and the city has since been regarded as a Royal Free City.

The city was industrialized in the 19th century, with the construction of an iron and roller mill in 1841. The city peaked at the turn of the 19th and 20th centuries, when the ironworks had 3,500 employees and was the largest ironworks in the kingdom at that time Hungary , with production of 85,000 tons of pig iron and 100,000 tons of steel per year.

After the break-up of Austria-Hungary and its integration into Czechoslovakia , growth came to a standstill, influenced by the political conflicts and the economic crisis after the First World War. The uprising in Krompachy ( Krompašská vzbura in Slovak ) on February 21, 1921, which ended in a bloody army shootout and left four dead and 14 injured, is particularly well-known . The ironworks was liquidated in 1923. The copper works built in 1937 were destroyed during the Second World War, but restored in 1951, together with the electrotechnical works built in 1948.

In recent years tourism has developed alongside the two existing industrial companies. The winter sports area Plejsy should be mentioned here.

Krompachy is the headquarters of the copper smelter Kovohuty, as, which employed around 150 people in 2019. It is a subsidiary of the Austrian Montanwerke Brixlegg AG .

The city has a train station on the Košice – Žilina railway line . The country road II / 547 (Košice - Margecany - Spišské Vlachy ) runs through the village .