Medieval drawing of the Sababurg

Sababurg, view from the west 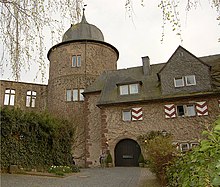 A corner tower of the Sababurg

The Sababurg , until earlier zapping Castle then tap castle and today in the vernacular after the Brothers Grimm fairy tales Sleeping Beauty castle called, is the ruins of a hilltop castle in the fabled Reinhardswald , located in the northern Hesse Kassel district stretches. Sababurg is also a district of the Beberbeck district of Hofgeismar .

The hilltop castle was built from 1334 as a Zappenburg to protect the pilgrims of the nearby pilgrimage town of Gottsbüren . From 1490 the hunting lodge Zapfenburg emerged from the medieval castle complex . After 1957 the complex was restored and since 1959 it has housed a hotel. Together with the Trendelburg and Krukenburg , today's ruins are one of the three most famous castles in the Reinhardswald region, although the latter is just outside this forest. The Sababurg Zoo and the Sababurg Primeval Forest are in the vicinity . The idea for the Sagaland board game was born at the castle .

The Sababurg stands in the core area of ​​the Reinhardswald in the east-north-eastern district of Sababurg, named after it and part of the Hofgeismar district of Beberbeck (estate settlement with castle) . It is located between the 4.5 km west-southwest of the castle ruins lying Beberbeck and 4.5 km (each a straight line ) NNW of her lying Gottsbüren (eastern district of Trendelburg ). The ruin stands on a little wooded basalt dome at about 315  m above sea level. NHN . To the southwest below the castle is the Sababurg zoo , through which the small Donnebach, an eastern or right-hand tributary of the Holzape, flows in a north-westerly direction . The ruin, place and zoo are surrounded as a Hofgeismar exclave by the community-free area Gutsgebiet Reinhardswald , in which the Sababurg primeval forest lies beyond the park .

The Zappenburg (formerly: Zappaborgck and Zappenborgck ) was built on April 19, 1334 to protect and shield the pilgrims of the nearby pilgrimage site Gottsbüren , "where the incorrupt body of Jesus is said to have been found in 1330 " . It was founded by the Diocese of Mainz , which was in constant competition with the Landgraviate of Hesse , the Diocese of Paderborn and the Duchy of Braunschweig , whose territories almost bordered one another here. The construction activities were probably financed by income from the pilgrimages. When the work was completed in 1336, Arnold von Portenhagen became the first castle man.

In 1346 there were disputes in which Mainz was defeated. The castle was divided between the Landgraviate of Hesse and the Diocese of Paderborn and in 1455 was described as "desolate". The castle came completely into the possession of Hesse in 1462 after the end of the Mainz collegiate feud .

From 1490, Landgrave Wilhelm I (1466–1515) had "a magnificent hunting lodge built on the foundations of the original complex, which was to become the scene of countless glamorous festivals and parties for 300 years" . After this reconstruction or reconstruction, there was a great need for drinking water for people and cattle and was the trigger for the construction of a water pipe. In 1508, construction began on the Palas , which was completed in 1519 under his grandson Philip I (1504–1567). There was also a stud farm.

In 1582 the existing chancellery building was erected as the castle became the seat of the Gieselwerder office . During this time the name Sababurg first appeared.

In the Thirty Years' War (1618-1648) the Sababurg was occupied by Catholic troops in 1628 by Field Marshal Tilly (1559-1632) and badly damaged. Afterwards "the palace complex fell into that wildly romantic overgrown condition in which the vernacular after the spread of children and house fairy tales " (published from 1812) "saw the Brothers Grimm as the place where the story of Sleeping Beauty must have happened" . Since then, the castle has also been known internationally as the Sleeping Beauty Castle . As described in the fairy tale, the castle is said to have surrounded a 5 km long and 3 m high hedge of thorns from 1571 to 1591. It served to protect one's own animal husbandry from wild animals. Damage was not repaired until 1651.

Landgrave Karl (1654–1730) had the Sababurg expanded slightly. In 1724 the stud was relocated to Beberbeck. In 1760, during the Seven Years' War (1756–1763), the castle was occupied by French soldiers and largely fell into disrepair. It later served as a forester's house. Between 1824 and 1826 the west, east and south wings of the castle were demolished.

Today's use and condition of the Sababurg

The Sababurg complex has been gradually being restored by the State of Hesse since 1957 and made accessible to the public. From 1959 the ruins were converted into an upscale hotel with a restaurant and café, which opened in 1960. The SabaBurgTheater is also located there . In 1987, Germany's first civil wedding room outside a town hall was set up on the Sababurg. In 2002 the second, larger wedding room was added.

From the original defense systems of the Sababurg, parts of the curtain wall with flank gates and moats have been preserved due to restoration work . The main hall is only present in its outer walls. In addition to the two mighty corner towers with their French domes , which are used by the hotel today, a smaller stair tower has been preserved. The office building was expanded in 1976 by a modern extension.

Since the beginning of the summer half of 2018, the Sababurg has only been temporarily open to visitors to a limited extent due to the extensive renovation work. Only the exterior of the castle can still be visited on weekends and public holidays.

Attractions in the area

In 1571, Landgrave Wilhelm IV (1532–1592) founded the Thiergarten Sababurg below the Sababurg , which was one of the first animal parks in Europe and is now called the Sababurg Zoo . The walls of the zoo were built with stones from Schöneberg Castle, which was demolished in 1582/83 . It is about 130 hectares. Ure , fallow deer , white deer , chamois , elk and reindeer were kept there for the purpose of hunting and research . In 1770 the park was redesigned according to the wishes of Landgrave Friedrich II (1720–1785) according to baroque patterns. For the par force hunt , a roundabout was created, to which star-shaped aisles , which can still be recognized today as oak avenues , lead. At the end of the 18th century, the Hessian landgraves lost their interest in the zoo. It became part of the Beberbeck Stud , and around 1790 the deforestation of the park area, which had been largely forested until then, began.

At the beginning of the 1970s, as the owner of the park area, the Kassel district began to reactivate the zoo. In 1973 it was reopened as a wildlife park . The park with its wide pastures is home to a lot of local big game, including tail cattle , wild horses like the Przewalski horses or the tarpans , wolves, but also exotic animals like kangaroos, monkeys, penguins and llamas.

The jungle Sababurg , who just west borders the "Tierpark Sababurg", is a former wood pasture , according to and since 1907, a disparity in the figures 88 to 92 hectare nature reserve with "800- to 1,000-year-old oaks and meter high ferns" in which, among other things, European beeches also grow.

The castle and the place Sababurg are on the county road  55 coming from Hofgeismar past whose district Beberbeck and the jungle Sababurg for Tierpark Sababurg and then even further to Trendelburger district Gottsbüren to achieve results; From the zoo you can drive on this road and then on the county road 56 up to the castle. Because of the remote location, visitors usually travel by car .

In addition, two bus lines run by the North Hessian Transport Association (NVV) go there: Line 190 from Hofgeismar via Reinhardshagen to Hann. Open (both in Wesertal) and line 192 of Hofgeismar (in sophistication tal) according Gieselwerder (municipality Wesertal in Weser tal). They are operated by the Sallwey bus company and Regiobus Uhlendorff.

In the legend of the Krukenburg , which is about the giant Kruko and his daughters (which is why the legend of Brama, Saba and Trendula is sometimes called), the castles in the area become fairytale-like in a story about the murder of Saba (who is named as the founder of the Sababurg is involved) through her sister Trendula. Brama and Saba had turned to the Christian faith, while their sister Trendula, legendary founder of the Trendelburg , continued to adhere to the pagan faith and therefore bothered her sisters. They moved away from the Krukenburg and founded their own castles, Brama the Bramburg and Saba the Sababurg. Out of anger, Trendula killed her sister Saba after a visit to Brama near the Krukenburg; the forest area northwest of Wülmersen is therefore called the murder chamber . Trendula herself was struck by lightning in a divine judgment . The place is known today as the downpour .

Castles and palaces in Hessen in the Kassel district