The VIII Army Corps was a large unit of the Prussian Army . It existed from 1820 until it was dissolved in 1919. The general command was located in Koblenz , the capital of the Rhine Province .

View from Kastorstraße to Kastor Church 1900, on the right the headquarters of the General Command of the VIII Army Corps

The memorial for the dead in the campaign of 1866 in Koblenz, donated by officers of the corps

The corps was established on April 3, 1820 from the already existing General Command in the Grand Duchy of Lower Rhine and the subsequent General Command on the Rhine. The General Command was up to the resolution 1919 in Koblenz and shelter until the outbreak of World War I the V. Army inspection .

On June 29, 1865, General of the Infantry Eberhard Herwarth von Bittenfeld received the general command of the VIII. (Rhenish) Army Corps (15th and 16th Divisions), which together with the 14th Division formed the Elbar Army in the German War of 1866 . The subordinate troops occupied Dresden , on June 27 and 28, 1866, threw the enemy back into the main Austrian army in the battles near Hühnerwasser and Münchengrätz , and on July 3, near Königgrätz, defeated the left wing of the Austrians and the Saxons by storming the villages Problus and Prim.

In the Franco-Prussian War of 1870/1871 the corps was subordinate to the commanding General von Goeben in the 1st Army under General von Steinmetz's Infantry . The 15th Division under Lieutenant General von Weltzien and the 16th Division under Lieutenant General von Barnekow were subordinate to the large association . The march on the Saar line took place until August 2nd in the area on both sides of Saarlouis . On August 2nd, parts of the 16th division came into action at the meeting near Saarbrücken with parts of the French 2nd Corps ( Frossard ) and had to withdraw a little. After Frossard himself went back to Forbach on August 5th, he was followed by the VII Corps.

In the Battle of Spichern on August 6, 1870, the first major battle occurred, in which Barnekow's division of the VIII Corps also intervened. While advancing towards the fortress of Metz , the corps had received orders on August 13 to stand still at the Nied for the time being to await the arrival of the right wing ( IX Army Corps ) of the 2nd Army advancing south. While the VII. Corps was embroiled in a serious battle the following day between Colombey-Nouilly , the VIII. Corps tried to secure the right bank of the Moselle, abandoned by the French, by advancing further west. On August 16, the VIII. Was in the Arry area, the VII. Reached the Seille around Sillegny, while the Prussian I. Army Corps remained on the left at the Nied.

At the Battle of Mars-la-Tour , the 16th Division reached the battlefield in the late afternoon and immediately intervened in the fighting. On August 18, the combined 1st and 2nd Armies succeeded in defeating the French Army on the Rhine under Marshal Bazaine near Gravelotte . The VIII. Corps attacked via Rezonville against Gravelotte , the VII. Corps secured in the Bois de Vaux as far as the Moselle, while the bulk of the German 2nd Army north of St. Privat began to surround the northern wing of the French. The 15th division fought for possession of the eastern edge of the valley of the Mance Gorge, behind it the 16th division was initially in reserve , but had to rush to the aid of the struggling Weltzien division in the fight for the lease of St. Hubert. In the late afternoon, the II Army Corps arriving at Rezonville had to intervene in the battle and tried to take the heights of Point du Joux in the early evening. For the VIII. Corps, after the withdrawal of the French right wing in front of St. Privat, the future task of holding the French in the west of the fortress between Chasel and St. Ruffine became apparent.

After the capitulation of Metz in October 1870, the freed 1st Army (VIII. And parts of the 1st Corps) under General Edwin von Manteuffel was transferred to the Somme to secure the siege of Paris against the French Northern Army . From November 24, 1870, serious fighting took place on the Somme between German and newly established French associations. After several smaller meetings of reconnaissance units, the actual battle of Amiens (1870) began on November 27 near the village of Villers-Bretonneux . The VIII. Army Corps was fighting here with the French Northern Army under Jean Joseph Farre . In total, the French had 17,500 men in regular soldiers and around 8,000 men in mobile guards. The Germans were a little outnumbered, but they were able to push the French back. A decisive victory did not succeed, however, as the French, with the exception of the fortress garrison of Amiens , withdrew early behind the protection of Arras . On November 30th, the VIII Corps occupied the city of Amiens for the first time. After the 1st Army had crossed all of Normandy , there were again stronger French troop rallies in the hinterland. As a result, the 15th Division marched up via Breteuil to Montdidier and occupied the lost Amiens again. The corps was used in the further course of the fighting on December 23 and 24, 1870 in the Battle of the Hallue , the 15th Division (now under General Ferdinand von Kummer ) encountered Allonville and the 16th Division attacked Villers-Bocage against Bethencourt . After Faidherbe broke off the fighting on December 25 and retreated, the Barnekow Division and the 3rd Reserve Division besieged the fortress of Péronne .

Further fights with the French XXIII. Corps under General Paulze d'Ivoy followed for the corps on January 3, 1871 at the Battle of Bapaume . On January 19, the French Northern Army was forced to retreat again at the Battle of Saint-Quentin (1871) . On January 28, the hostilities were ended by the armistice of Versailles , until January 29, the VIII. Corps with the 16th Division to Bray-sur-Somme , behind the 3rd Reserve Division to Chaulnes and the 15th Division advanced to Acheux-Villers-Bocage.

In 1893 the Prussian military administration planned the establishment of the Elsenborn military training area in the heath and wasteland north of Elsenborn (Hohes Venn). In the spring of 1895, construction began on a 44 km² military camp for the Rhenish VIII Army Corps. The camp made Sourbrodt station on the Vennbahn line particularly important. It became a loading station for the units practicing on the square. 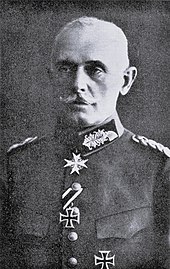 General of the Infantry Julius Riemann

At the beginning of the First World War, the VIII. Corps under General der Infanterie Tülff von Tschepe and Weidenbach was deployed on the Western Front as part of the 4th Army . The bulk of this army met the French on August 22, 1914 between Graide- Neufchâteau . On August 23, the corps reached out to encircle Gedinne and reached Houdremont. The further advance brought the 16th Division deployed on the right and the 15th Division, advancing to the left to the west, almost without a fight via St. Hubert towards Châlons-sur-Marne . During the Battle of the Marne , the corps on both sides of Vitry-le-François was in combat with the French 12th Corps and had to go back to the new Souain – Perthes front line on September 9 and 10 via Suippes . On October 5, 1914, General Julius Riemann was appointed commanding general , the corps was now under the 3rd Army in Champagne . In December 1914, the corps fought at Perthes and Massiges in the first defensive battles against the French 4th Army (Langle d'Cary) and from February to March 1915 in the winter battle in Champagne . The corps was north of Souain to Perthes in the main section of the French attack and covered the road from Souain to Somme Py.

From May 13, 1915, the corps replaced the Bavarian 5th Reserve Division during the Loretto Battle and took over the defense in the Carency - Ecurie - Neuville section with the assigned 16th , 58th and 15th divisions . After being replaced by the VI. Corps in the Artois , the 8th Army Corps was located on the Aisne sector in the Soissons area from autumn 1915 .

Between December 1916 and March 1917, the corps was under the new commanding General Karl Dieffenbach on the Eastern Front and fought with Army Group Linsingen am Stochod in Volhynia . On May 11, 1917, General Roderich von Schoeler was entrusted with the management of the VIII Army Corps. In September 1917, the VIII. Corps came to Army Division B and was assigned a section on the Swiss border.

In the spring of 1918, the Schoeler group was deployed on the right wing of the 7th Army for the " Archangel attack " during the spring offensive . It entered Chauny on April 7 , conquered the city, forced the crossing over the Oise and stormed the heights of Amigny. In the following days the corps fought together with the VIII Reserve Corps ( Wichura Group ) attacking westwards via the Ailette in the Coucy coppice forest. After the conquest of Coucy-le-Château , they jointly pursued the defeated opponent to the Oise-Aisne Canal , where the attack was discontinued. From June 9th to 13th, 1918, the corps fought as the left wing of the 18th Army in the " Gneisenau attack " in the Noyon area . On the first day of the fight the enemy was pushed back 7 km to the south and on June 10th the troops captured Marquéglise. In the further course of the fighting they advanced to the Matz to the southeast and thereby threatened the French troops on the left flank on the heights of Lassigny . However , Schoeler's troops could not advance further than the Aronde , as strong French counter-attacks were already in place. On 15 July, the command covered the group Schoelerpark assigned 87th and 201st Division during the last German offensive ( Marne protection Reims ) at Étrépilly the right wing of about Marne previous group Wichura (VIII. Reserve Corps). In September 1918 the corps was in the defensive battle between Oise and Aisne at the seam between 7th and 1st Army . The corps was involved in the defensive battle between Cambrai and Saint-Quentin during the Hundred Days Offensive . At the end of October 1918, the 24th , 197th , 201st and 223rd Divisions were subordinate to the General Command .

The general command as the command authority of the army corps was under the leadership of the commanding general .

→ Main article : Flags of the line infantry regiments of the Prussian Army