Started his career as a private driver

In 1991 Delecour became a works driver at Ford . He made several appearances in the World Rally Championship with a Ford Sierra RS Cosworth 4x4 . At the season opener in Monte Carlo, he achieved his first podium finish with third place. Another third place followed in the Rally Catalonia , he finished the drivers' world championship in seventh place. From the 1992 season , Daniel Grataloup was his co-driver for several years. In the drivers' world championship, Delecour finished sixth with 45 points.

For the 1993 season , Ford switched to the Ford Escort RS Cosworth model . This season turned out to be the most successful in Delecour's career. Second place in Monte Carlo was followed by his first victory at the Rally Portugal and he then led the drivers' world championship. Although Delecour won two more rallies this year, the Corsica Rally and the Catalonia Rally , he had to admit defeat to Juha Kankkunen from Finland in the fight for the world championship . Classified by the experts as a favorite for the world title, Delecour started the 1994 season . At the beginning of the season he won the Monte Carlo Rally for the first time. At the Rally Portugal he was also the fastest driver until he retired. A few weeks later, Delecour was involved in a traffic accident. He had to pause half the season due to injuries, which meant that his chances of winning the drivers' title were no longer available. He made his comeback at the third to last rally of the season and Delecour finally finished eighth in the drivers' world championship.

After the serious road accident, Delecour could not quite build on the successes of the last two years. He finished the 1995 season, with two second places once in the Monte Carlo Rally and the Corsica Rally as the best results, in fourth place in the world championship.

After the 1995 season, Delecour left Ford and went to Peugeot . He was back in the French rally championship with a Peugeot 306 Maxi . In 1996 and 1997 he won three rallies there and finished the championship in third place. Peugeot only competed in individual races in the World Rally Championship , so Delecour was unable to fight for top positions in the overall standings. In this phase of his career, his best result in the world championship was second at the 1998 Corsica Rally .

The Monte Carlo Rally contested Delecour 1999 as a privateer with a Ford Escort WRC and finished this fourth. For the Corsica Rally, Peugeot brought the Peugeot 206 WRC to the start for the first time , with which Delecour completed the rest of the season. For Delecour it was gradually getting more difficult to assert himself against his teammates Gilles Panizzi and Marcus Grönholm . In the 2000 season he was in their shadow. Delecour reached the top three podium in four rallies, but victories were prevented by technical defects and stall orders. While Grönholm won the world championship, Delecour only finished sixth. Because of differences of opinion with Panizzi and the team management, which in his opinion put him at a disadvantage, he left Peugeot after the season.

Return to Ford and unsuccessful end of career 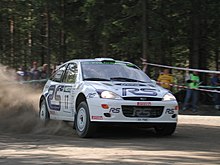 For the 2001 season , Delecour returned to Ford, whose works outings have now been organized by Team M-Sport . François Delecour drove a Ford Focus RS WRC . He started the season with a third place in the Monte Carlo Rally. This success was his only podium result this season and he continued to score points regularly. After the end of the season, he finished ninth in the drivers' world championship.

After a year at Ford, Delecour moved to Mitsubishi in 2002 . The Mitsubishi Lancer WRC , which was new at the time, was not competitive and did not allow Delecour any results in the points. In an accident in the penultimate World Championship round in Australia, co-driver Daniel Grataloup was so seriously injured that he was unable to take part in the season finale in Great Britain. Dominique Savignoni took the place in the passenger seat. After the 2002 season, he temporarily ended his career in international rallying.

In the following years Delecour took part in individual national and international rallies. In the World Rally Championship, he repeatedly competed in individual rallies with a Porsche 997 GT3 Cup RGT or in a Peugeot 207 S2000. The focus was not on the results, but on the idea of ​​participating and having fun.

At the end of 2010 , the four-eight- year -old Delecour announced in the media that he was making his comeback at the 2011 Monte Carlo Rally . This was held as part of the Intercontinental Rally Challenge (IRC). Delecour drove a Peugeot 207 S2000 and his co-driver was again Dominique Savignoni. Delecour was able to keep up with the pace of the competition straight away. With the right choice of tires, he won a special test on snow-covered roads and was temporarily in second place overall. He finished the rally in fifth place. He then announced that he wanted to take part in further races of the Intercontinental Rally Challenge .