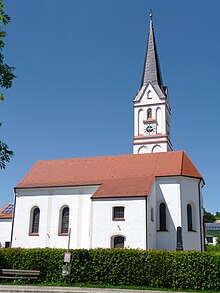 The parish church of St. Sebastian

Furth is a municipality in the Lower Bavarian district of Landshut and the seat of the Furth administrative community .

There are 42 parish parts:

During construction work in 1984, the remains of a ceramic ribbon settlement from around 4500 BC and the Münchshöfen culture around 4000 BC were found.

The place owes its name Furth probably to a road that crossed the wide valley and could have been laid out at the time when the Counts of Ebersberg wanted to create a transport connection between their two domains of Tondorf and Pfeffenhausen. The place is first mentioned in a document with “Marktwart de Furte”, who testifies to the donation of a farm to the Ebersberg monastery around 1030 .

On January 1, 1972, the previously independent municipality of Schatzhofen was incorporated. The community seal also contains the sword of their church patron St. Michael . As one of the oldest parishes in the district, it goes back to at least the 8th century.

Arth joined on May 1, 1978. This place can also look back on a long history. Donation deeds from the years 814 and 822 indicate a manorial rule in this area. Arth is first mentioned in documents in 1028 in the records of the St. Emmeram monastery in Regensburg. The broken wheel of Saint Catherine stands for the old community in the Further coat of arms .

Furth can record a continuous increase in population. The average age is 40 years with a share of under 18s of over 20 percent and a large birth surplus. Furth is considered the youngest municipality in the Landshut district.

The Marist monastery with its many international contacts is of great importance for the community .

Eight months after the end of the Second World War , the first local elections (municipal council elections) took place in the districts of Bavaria on January 27, 1946. In April and May 1946 the first elections for mayors, district administrators and district assemblies followed. In 2006 the 60th anniversary was celebrated.

The community is a member of the following special-purpose associations:

The community of Furth is the first German model community of the European Commission for Renewable Energies .

The next local elections will take place in 2020.

Mayor is Andreas Horsche ( FW ). In the 2014 local elections , he succeeded Dieter Gewies ( Greens ), who had not run and had previously been confirmed in his office in the 2008 local elections .

Due to its understanding of sustainability, the community attaches great importance to the supply of regional products, in 2012 a community village shop with this claim was opened on the village square.

As part of the guideline for promoting the development of high-speed networks in the Free State of Bavaria of July 10, 2014, the municipalities have a funding amount of at least 500,000 euros and a maximum of 950,000 euros; for Furth this is 820,000 euros.

The community of Furth is also very well connected to the national transport network. The district of Arth is traversed by the federal highway 299 , which, among other things, represents an important connection axis between the Bavarian chemical triangle and the industrial site between Neustadt an der Donau and Ingolstadt . At the Arther roundabout, the very well developed state road St 2049 branches off from the federal road. It runs through the village of Furth and passes the district of Schatzhofen. The district roads LA 23 and LA 24 also run through the municipality .

The sports club DJK SV Furth has already celebrated high levels of success in many areas.

The DJK achieved its greatest successes with the United Stars dance group. The Further became, partly together with some dancers from Taufkirchen , also as "Tanzgemeinschaft United Stars / Showfunken", several times German champions in show dance and could look forward to nine European and one world championships.

But other branches, such as the table tennis department , have already won several titles, also on the southern Bavarian and Bavarian levels.

The " Ju-Jutsu Bayerncamp" is held every year in the summer holidays with great success on the Further Klosterberg.

The "Theaterfreunde Furth" theater group also belongs to the sports club and performs every year in the theater of the Marist monastery.

The soccer , tennis and stick shooting departments were also successful , and some gymnastics courses are also offered.

In the community of Furth, special emphasis is placed on maintaining and improving the ecological and economic fundamentals in order to continuously improve the quality of life in the village. New ways in the energy supply such as the installation of photovoltaic systems on numerous roofs, a comprehensive sewage concept, the use of own resources for local needs, an environmentally friendly building land designation and business settlement and even further improved leisure opportunities should increase the quality of life. For example, a wood chip heating plant was built in Klosterstrasse a few years ago .