The parish church of St. Georg 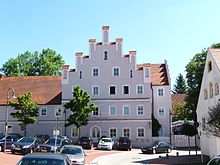 Rottenburg an der Laaber (officially: Rottenburg adLaaber ) is a town in the Lower Bavarian district of Landshut .

The city is located in the northern, rural area of the Landshut an der Große Laber district . The easternmost foothills of the urban area also touch the valley of the Kleine Laber , in which Inkofen with Rahstorf and Allgramsdorf are located.

Rottenburg as a large village is next to the main town of the districts Högldorf , Inkofen , Munster , Lower Eulenbach , Oberotterbach , Oberhatzkofen , Oberroning , Pattendorf and Pfeffendorf in which previously independent municipalities were and 1972-1978 Rottenburg incorporated were. In addition to these ten places, 59 other places belong to Rottenburg, so that a total of 69 places form the city:

Around the birth of Christ, the Romans built a fortified guard system on the Hofberg to protect the Roman road to Regensburg . After the Bavarian and Germanic landings in the centuries to come, Count Rodolt or Rodin from the influential Ebersberg family built the remains of the Roman complex into a castle. When the Sempt and Ebersberg family died out in 1045, the lords and later Counts of Roning took over the inheritance. Count Otto, who founded the Roning-Rottenburg branch, expanded the castle in terms of defense and living space around 1100 in order to inhabit it himself. With the death of Count Konrad III. In 1180 the line died out, which resulted in bloody inheritance disputes. The Moosburger dynasty decided this for itself and expanded the castle into a mighty fortress.

After the counts of Moosburg-Rottenburg died out in 1279, the Rottenburg fortress and the surrounding area became the property of the Wittelsbach duke Heinrich von Niederbayern . As a result, Rottenburg became the seat of a huge regional court that reached as far as the gates of Landshut . In the course of the construction of a connecting road between the ducal cities of Kelheim and Landshut, a ducal tavern was built at the foot of the fortress. When the traffic from Nuremberg- Kelheim-Rottenburg-Landshut increased after the construction and more and more craftsmen settled down, the town of Rottenburg was granted market rights in 1378 by the dukes Otto and Friedrich . This was confirmed by Duke Friedrich in 1393 and Rottenburg finally received its own market seal in 1396. In the 15th century the construction of the fortification began. A flourishing community emerged with many guilds.

In the 17th century, however, Rottenburg suffered significant economic and cultural setbacks during the Thirty Years' War . The Swedes pillaged the fortress, the market and the surrounding area several times. In 1632 the castle was burned down to the keep . In 1669 and 1681 there were further fire disasters. In the 18th century the market and the surrounding area suffered from the consequences of the War of the Austrian Succession .

Around 1800 the steadfast keep was demolished as part of the "Entburgung" in order to pave the road to Landshut . (See Burgstall Rottenburg )

Being located in Bavaria in 1862 performed the separation of justice and administration, Rottenburg seat was a Royal Bavarian Regional Court (from 1879 Amtsgericht ) and received a district office and notary. In 1872 the market got its own hop seal to protect the local hops from counterfeiting. 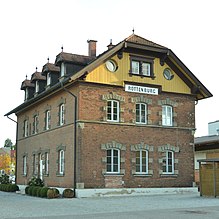 In 1900 the Landshut – Rottenburg railway was opened. In 1905 Rottenburg got a permanent power supply and street lighting from the municipal power station. In 1907 the citizens got access to the water supply. In 1961 Rottenburg was named a “central location” and received state subsidies for the newly developed industrial area “Galgenlohe”. Because of the construction work for the Olympics, the anti-aircraft missile battalion 34 had to be relocated from Munich- Oberwiesenfeld to Rottenburg. In 1969 Rottenburg became a garrison location after the barracks were handed over. The Bavarian Interior Ministry raised the market Rottenburg 1971 on the city . A year later, the city lost its status as a district town and was incorporated into the enlarged Landshut district. In 2007 the city officially celebrated its 750th anniversary.

On July 1, 1972, the previously independent communities Högldorf and Oberotterbach were incorporated. On January 1, 1974, a large part of the dissolved community of Niedereulenbach was added. On May 1, 1978, the city became a large municipality as part of the municipal reform . About a third of the former district area of ​​Rottenburg was incorporated, namely Inkofen , Münster , Oberhatzkofen (with the towns of Bogenhausen and Niederhatzkofen incorporated on May 20, 1874, and Unterlauterbach , incorporated on April 1, 1971 ), Oberroning , Pattendorf (with one on May 1, 1874 ) July 1972 incorporated part of the dissolved communities Wolferthau and Pfeffendorf ).

Eight months after the end of the war, the first municipal elections (municipal council elections ) took place in the municipalities of Bavaria on January 27, 1946 . In April and May 1946 the first elections for mayors, district administrators and district assemblies followed. In 2006 the 60th anniversary was celebrated.

The city of Rottenburg is a member of the following special-purpose associations:

The distribution of seats in the city council has developed as follows since 2002:

The next local elections are expected to take place in March 2026.

Alfred Holzner ( FW ) has been mayor of Rottenburg since 2008 . He had replaced Hans Weinzierl (FW). In the local elections in 2014 and 2020, he was confirmed in his office in the first ballot.

The largest resident company is the spirits manufacturer Rola , which produces around 50 million bottles a year, mainly for discounters such as Aldi . Inergy is also located in Rottenburg, a manufacturer of fuel tanks that belongs to the French Plastic Omnium group.

The upcoming renovation of the town center is being funded by the Bavarian State Ministry of the Interior with funds from the urban development program.

As part of the guideline for promoting the development of high-speed networks in the Free State of Bavaria of July 10, 2014, the municipalities have a funding amount of at least 500,000 euros and a maximum of 950,000 euros; for Rottenburg this is up to 920,000 euros.

Today (as of February 21, 2014) electricity consumption in Rottenburg adLaaber is around 56,669 MWh / year. This is offset by around 26,132 MWh / year of electricity produced in the city from renewable energy sources (recorded by the EEG - Renewable Energy Act ). This means that the share of electricity from renewable energies is 46% (for comparison: in the Landshut district, this share is 43%). The largest expansion took place between 2009 and 2012.

Around 5,166 MWh / year are generated in nine biomass plants in the area of ​​the city of Rottenburg adLaaber. The biogas plants are located in:

Almost 20,825 MWh / year of solar power are produced in the area of ​​the city of Rottenburg adLaaber with 869 systems on the roofs of private, commercial or agricultural buildings. The installed electrical output is almost 20 MW peak .

There are no wind turbines in the area of ​​the city of Rottenburg adLaaber . There is potential for the construction of wind turbines. By decision of January 13, 2014, the government of Lower Bavaria declared the sixth ordinance amending the Landshut regional plan to be binding, which regulates the availability of areas for wind power. This provides for priority areas but no reserved areas for Rottenburg adLaaber. Priority areas for wind power are therefore:

As of April 2013, the city was also in the process of changing the land use plan in order to identify further concentration zones for the use of wind power.

There is an open all-day school (oGTS) at the elementary school in Rottenburg adLaaber .

Rottenburg adLaaber is located in the catchment area of ​​the following high schools:

There is a police station in Rottenburg, which belongs to the Lower Bavaria police headquarters .