The parish church of St. John the Baptist in Bodenkirchen

Bodenkirchen is a municipality in the Lower Bavarian district of Landshut .

There are 80 officially named municipal parts:

A Neolithic amulet from Haunzenbergersöll / Tal (8000 BC, in the Museum Vilsbiburg ), linear ceramic fragments near Aich / Hub (4500 BC) and a double-settled grave mound field in the forest near Treidlkofen (1500 or 750 BC).

In 1482 "Bodenkirchen" appeared as a chairman in the Biburg office of the Biburg Regional Court ( Vilsbiburg ). In the statistical description of 1752/1760, the Bodenkirchen Obmannschaft counted 23 properties. The church of St. John the Baptist was a branch church of the parish of Aich. Further regional court directorships in today's municipal area were Aich, Binabiburg, Treidlkofen, Scherneck, Margarethen and Bonbruck I and II. Lower court districts were the court brands Psallersöd, Langquart, Bonbruck, Haunzenbergersöll and Binabiburg. In 1808 the court brands were dissolved and, like the chairmen, were given a parish-like status.

1808/1811 was with the first Gemeindeedikt the control district Bodenkirchen consisting of three villages, a Weiler and 18 Einöden 1820 formed the community bottom churches. The community Haunzenbergersöll came to Bodenkirchen in 1828 after a dissolution process.

The German kitchen manufacturer Bulthaup was founded in 1949 by Martin Bulthaup in Bodenkirchen.

On June 10, 1983, the new town hall in the former Bonbruck Castle was inaugurated. It was used as a school building until 1981.

In the course of the territorial reform on April 1, 1971, the communities of Aich, Binabiburg, Bodenkirchen and Bonbruck voluntarily merged to form the large community of Bodenkirchen. On May 1, 1978, a small area with the places Gänsöd , Grub , Kremping , Lehing , March and Rafolding and fewer than 100 inhabitants from the neighboring municipality of Wurmsham was incorporated.

Since 1972, the year of the municipal reform, the population has increased by 1290 people until 2015. This corresponds to a growth of 32.63 percent. In the past ten years it has shrunk by 2.46 percent. Growth of 0.58 percent has been recorded over the past five years.

Eight months after the end of the war, the first municipal elections (municipal council elections) took place in the municipalities of Bavaria on January 27, 1946. In April and May 1946 the first elections for mayors, district administrators and district councils followed. In 2006 the 60th anniversary was celebrated.

The municipality of Bodenkirchen is a member of the following special-purpose associations:

Monika Maier (Free Voting Association) has been mayor since 2008. She replaced Helmut Wimmer (non-partisan voter community) in this position in the 2008 local elections . She was confirmed in office in the 2014 local elections .

The coat of arms of the noble Hauzenbergers on Haunzenbergersöll bears two crescents on a silver background, the convex edge, and a blue cross as an attribute of Saint John the Baptist, the patron of the churches of Bodenkirchen, Haunzenbergersöll and Binabiburg.

A white and blue flag with the municipality 's coat of arms is used as the unofficial municipal flag . 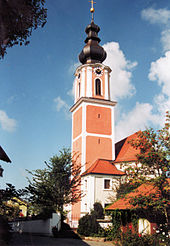 The parish church of St. John the Baptist in Haunzenbergersöll