Geisenfeld is a town in the Upper Bavarian district of Pfaffenhofen an der Ilm and, together with the municipality of Ernsgaden, forms the Geisenfeld administrative community .

Geisenfeld is located in the Hallertau hop country , directly on the Ilm . The next big city is Ingolstadt, about 20 km away . Further distances: Munich : 70 km Regensburg : 65 km Nuremberg : 100 km Augsburg : 70 km

The municipality has 32 officially named municipal parts (the type of settlement is given in brackets ): 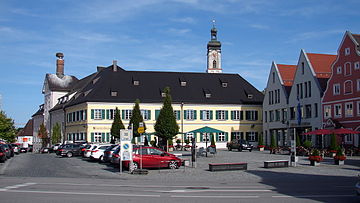 Ensemble on the town square 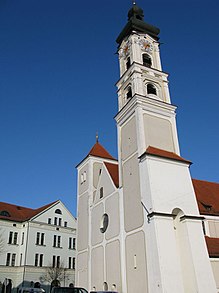 City view from the east

Between 500 and 700 the place was founded by immigrant Bavarians . The leader of the clan that settled here was a man named Gisil, from whom the settlement got its name (Gisilfeld, Gisinvelt, Gisenvelt). In 736 the first hop cultivation took place through immigrant Wends and with it the foundation of the Hallertau. Count Eberhard II of Sempt and Ebersberg founded the Benedictine monastery in Geisenfeld in 1037 . In 1230 the Ainau Church was built in place of the Ainau Castle. In 1281 or 1310 the place was raised to a market town . Between 1407 and 1409 a curtain wall was built around Geisenfeld. In 1410 the construction of the Vitus Church in Geisenfeldzüge began. The establishment of a permanent post office took place in 1558, the construction of the town hall with the representation of Justitia by Balthasar Stoll in 1626. From 1701 to 1712 the monastery buildings were rebuilt, in 1728 the south tower of the monastery church was built. In 1789 Geisenfeld received the office of game master . In 1803 the monastery was dissolved in the course of secularization , and in 1804 the monastery church was converted into a parish church. In 1805 the curtain wall was torn down. In 1816 Geisenfeld was given a gendarmerie station , and in 1818 today's political community was established.

In 1874 the "Geisenfelder Wochenblatt" appeared for the first time. In 1888 there was the first telephone in Geisenfeld. Geisenfeld received electric light from 1899 to 1900. In 1905 there was a first automobile in Geisenfeld, the owner is the brewery owner Josef Münch. In 1906 the Geisenfeld – Wolnzach train station was opened. In 1952 the place received city ​​rights , the district court Geisenfeld is dissolved in 1972. Eleven incorporations took place between 1971 and 1978 (see below). In 1983 the new town hall was opened, and in 1985 the hospital was converted into a senior citizens' home. In 1989 the railway line is closed. In 2002 the flood clearance is completed.

Development of the urban area

Geisenfeld has been a town since November 23, 1952 . From an economic point of view, the city of Geisenfeld, as a sub-center, is still the center of the northern district of Pfaffenhofen. Numerous medium-sized companies offer many residents jobs on site.

1 Of the inhabitants determined in 2006, 4821 lived in the incorporated towns.

The Geisenfeld city council consists of 24 city councilors and the mayor. In the city ​​council election on March 15, 2020 , the distribution of seats was as follows: 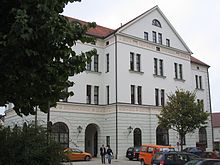 Paul Weber has been mayor of the city since May 2020. He replaced Christian Staudter, who had held the office since 2008.

The area around Geisenfeld is, like large parts of the Hallertau, very hilly. The soil is partly very loamy, which is very beneficial for hop growing. In the north of Geisenfeld a belt stretches from west ( Feilenforst ) to east ( Dürnbucher Forst ) with heavy forest cover.

The following music associations and groups are based in Geisenfeld:

The next train stations are in the south in Rohrbach on the Munich – Ingolstadt railway line and in the north in Ernsgaden on the Danube Valley Railway . Geisenfeld was directly connected to the railway network via the Wolnzach – Geisenfeld railway line, which opened in 1906 , but passenger transport was replaced by a railway bus line as early as December 1953 . Freight trains ran until 1987, in March 1988 the rail connection was formally shut down and then dismantled.

The federal highway 300 runs through Geisenfeld . The BAB 9 ( Langenbruck junction ) can be reached via them . The Mainburg junction of the BAB 93 is also nearby.

Municipalities in the district of Pfaffenhofen an der Ilm