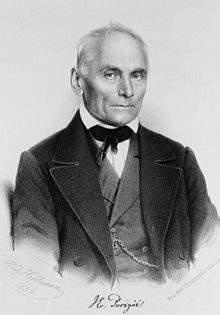 Jan Evangelista Purkyně , from 1869 Knight of Purkyně , also Johann Evangelist Purkinje and Johannes Evangelista (Knight of) Purkinje ; (* December 17 or 18, 1787 in Libochowitz in Northern Bohemia ; †  July 28, 1869 in Prague ) was a Bohemian , k. k. Austrian physio- , histo- and embryologist as well as linguist and philosopher and politician close to natural philosophy, who, as a representative of experimental natural research, contributed to overcoming natural-philosophical thinking. Purkyně is considered the founder of experimental physiology and co-founder of histology, microscopic anatomy and microscopic technology . He was also a promoter of the national consciousness of his Czech homeland.

Jan Purkyně was born on December 17, 1787 (less likely December 18) and baptized on December 19, 1787. He was the eldest son of the administrative clerk and landowner Josef Purkyně in the service of Johann Baptist Karl Walther von Dietrichstein-Proskau-Leslie (1728–1808) from the imperial family Dietrichstein zu Nikolsburg, on Libochowitz and Budin on the Eger. Purkyně's ancestors, who came from northern Bohemia, were Kalixtiner (a group of the Hussites ). The father died when Jan was six years old. His mother Rosalia, née Šafránek, came from a farming family. Purkyně later mentioned her as his first teacher of "domestic anatomy and physiology". She died in 1834. His brother:

In 1827 Jan Evangelista Purkyně married Julia Agnes Rudolphi (1800–1835), daughter of the Berlin anatomist and physiologist Karl Asmund Rudolphi . Two daughters from this marriage died in 1832 during a cholera epidemic , shortly afterwards his mother. Two sons were born while working at the University of Wroclaw :

In the years 1793 to 1797 Jan Evangelista Purkyně attended the elementary school in his birthplace and then the Piarist high school in Nikolsburg in Moravia , where the Piarist religious center and the central administration of the imperial princes Dietrichstein zu Nikolsburg were located. Since Purkyně was a talented singer and violin player, he got a paid job as a choir singer in the local church. At first he only spoke Czech, but soon learned German as well as Latin and ancient Greek.

After graduating from high school, he joined the order of the Piarists and was given the name Silverius a sancto Joanne Evangelista . As the best novice in his group, he completed his training as a religious teacher in 1805 and received a teaching position for the second high school class. A year later he was preparing for his ordination at a college in Eastern Bohemia . Here he learned the French and Italian languages. In the library of the order he familiarized himself with the philosophy of Immanuel Kant , Johann Gottlieb Fichte and Friedrich Wilhelm Joseph Schelling as well as other fields of knowledge. Shortly before the religious vows and the ordination he resigned from the order and looked for another way of life.

After studying philosophy for a year at Charles University in Prague, he was a private tutor with Franz Freiherr Hildtprandt von und zu Ottenhausen in Blatná from 1809 to 1812 . He then studied medicine in Prague from 1813 to 1818. The preference for anatomy and physiology was encouraged by Georg Ilg (~ 1771, died 1836 in Prague), professor of anatomy in Prague. In 1818 Purkyně obtained his doctorate in medicine with the work, which was also noted by Goethe, his later sponsor, Contribution to the knowledge of vision in subjective terms (Fr. Vetterl Edler von Wildenbrunn, Prague 1819) and worked as an assistant at the Institute for Anatomy and Physiology as a prosector . In 1823 he completed his habilitation for a dissertation on the physiological examination of the visual organ and the skin system and was appointed to the University of Breslau, where he taught as professor of physiology and pathology , confirmed by the king on January 11, 1823 . In the same year, on December 11th, Purkyně visited Johann Wolfgang von Goethe in Weimar , whose benevolence and exchange of information he greatly appreciated. Goethe was also impressed by Purkyně's personality and research concerns. In 1829 he was elected a member of the Leopoldina ( Academia Leopoldina Naturae Curiosorum ).

He was accepted into Freemasonry in Breslau and was a member of the Berlin Masonic Lodge Zum Pilgrim . Under the gubernial rule of Count Leo von Thun-Hohenstein in Bohemia, he was later examined several times and only remained unmolested when he promised not to take part in Masonic work.

In 1831 he applied to the University of Breslau to set up the first Prussian physiology institute. In 1832, after buying a microscope and moving several times , he succeeded in setting up an experimental physiological institute on November 8, 1839 and thus the first independent Wroclaw Institute for Physiology in a former prison room . Before 1839, most of the groundbreaking 14 dissertations by his students were written in Purkyně's apartment. This humble physiological research institution enjoyed the recognition of its peers and has been called the cradle of histology in Central Europe. Even Johann Nepomuk Czermak lived and worked from 1847 to 1849 in the House of Purkyně family.

With the help of the assembled achromatic microscopes available to him from 1832 ( Plössl Company , Vienna), Jan Evangelista Purkyně did his pioneering work in the field of anatomical tissue theory .

In October 1849 Purkyně received a call to the Charles University in Prague, where he took over the management of the newly founded Physiological Institute, which had four large and four small microscopes. Johann Nepomuk Czermak accompanied him and was his assistant from 1850 to 1855, habilitated with him for physiology, became a private lecturer and professor of physiology in Graz, Krakow and Budapest.

After 1853 Purkyně's scientific interest decreased. The organization of the Prague Institute, the publication of the magazine Živa (1853–1864) and his involvement in the national-Czech movement of Pan-Slavism cost a lot of time. As an elected member of the state parliament, he became one of the leaders of the Young Czechs and represented the establishment of a university in Prague with Czech as the language of instruction and study. In 1882, Charles University was divided into a German and a Czech language university with Latin as the teaching language.

Jan Evangelista Purkyně died in 1869 at the age of 81. The grave is located in the Vyšehrad Cemetery (Slavin Cemetery) in Prague .

In Breslau, Purkyně first researched the physiology of sight as well as the sense of touch and dizziness . In 1823 he published a paper on the analysis of fingerprints, discovered the sweat glands in 1833 . Less known than Purkyně's pioneering work in physiology and anatomy are his pharmacological experiments on himself . These began as early as his student days and accompanied him in his further academic career. The spectrum of medicinal products and herbal extracts examined ranges from henbane , alcohol , ether , foxglove extract , camphor , opium to deadly nightshade . In 1829 he described their hallucinogenic effects in self-experiments with grated nutmegs . It was not until more than 100 years later that the psychotropic active ingredient myristicin , which is related to mescaline , was found in nutmeg . Purkyně can be understood as a pioneer in human pharmacology , which investigates drugs and active ingredients in humans.

He also dealt with the bird's egg , plant germ cells and microscopic-histological examinations of plants. Experimental pharmacology and psychology , phonetics , embryology and physical anthropology were also among his fields of work. He was a fan of natural science , the principles of which were based on observation and experiment.

Purkyně considered the discoverer of the eyes glow, the lighting principle of the Helmholtz - ophthalmoscope . A (plate) microtome developed by him and Adolph Friedrich Oschatz (1812–1857) and the Drummond lime light to display microscopic images on a white background were used for the first time at the Breslau Institute (fixation on Daguerre-type plates). Purkyně coined the term ax cylinder in 1837 , the term enchyma (characteristic of the function of the glands ) in 1839 and the term protoplasm in 1840 .

In addition to numerous deonyms of sensory physiology, the anatomical nomenclature Purkyně owes numerous terms such as

He designed an apparatus ( Phorolyt or Kineziskop ; German Kinesiskop ) of a series of images based on the principle of the flip-book moves could represent (see. Phenakistoscope and zoetrope ).

Purkyně was the pioneer of the idea of Pan-Slavism , a cultural, political and economic independence of the Slavs . This had primarily to do with the fate of Poland , which was at the center of the conflicts of interest of the then great powers Prussia , Austria-Hungary and Russia and was subject to constant division. He regarded Silesia as a Slavic area, since about a quarter of the population of this Prussian area spoke Sorbian or Polish. He is said to have promoted rapprochement between the Slavic peoples, including the Czechs , through the creation of a common language.

Purkyně was observed by the secret police of the Austrian crown land of Bohemia in the Austro-Hungarian monarchy because of his relations with the national movements of the Czechs , Slovaks and Poles ; only his prominence is said to have saved him from state repression. In 1848 he was a participant in the Slavs Congress in Prague with the Whitsun uprising in Prague ; 1861 member of the Bohemian state parliament.

He repeatedly called for the introduction of the Czech language to universities for Czech citizens.

Pulse end segment of cardiac excitation propagation . In 1838 Purkinje began a series of investigations that dealt with the microscopic observation of nerve fibers . In the original work from 1845 he described the microscopic anatomy of the nerves (cutaneous nerves, spinal cord nerves , cranial nerves , periosteal nerves , vascular nerves , nerves of the eye, intestinal nerves, urogenital nerves) as well as the nerves of the outer surface of the heart and nerve structures of the heart wall. Although he described structures structured in filament or fiber formation (the specific Purkinje fibers, today recognized as primitive heart muscle fibers), he had no idea of ​​their physiological significance.

The entoptic perception of the retinal vessels (synonym: Purkinje shadow , vascular shadow figure ), which are dark on an evenly deep orange background, can be provoked by moving lateral lighting of the eye in a darkened room or by pressure on the eyeball (phosphene).

From 1825 to 1832 Purkyně studied the early development of the bird's egg in the female body. He discovered and isolated the germinal vesicle ( Purkinje vesicle ) at the site of the egg yolk , where the embryo will later develop.

After the first positive afterimage and a dark pause, a first negative afterimage occurs which contains the complementary colors to the primary image .

In 1825 he investigated the change in the relative perception of color luminosity in twilight , an indication of different visual receptor systems ( rod and cone system , scotopic (night) vision and photopic (day) vision). The term extended Purkinje phenomenon describes the shift in brightness in the direction of the short-wave spectral light component.

This is where the large, pear-shaped nerve cells are located, which rise vertically with two to three dendrites and branch out in one plane.

Large pear-shaped nerve cells in the stratum gangliosum of the cerebellar cortex.

Jan Evangelista von Purkyně received numerous international recognitions, such as the academies in Vienna (1860), Saint Petersburg (1836), Paris (1861) and the Royal Society in London (1850). He was a member of about 37 scientific societies (beginning in 1829 with the Leopoldina ). In April 1868 he was awarded the knighthood of the Leopold Order . In 1869 he was raised to the Austrian-Hereditary nobility with the title Knight of Purkyně. In 1862 he was awarded the Russian Order of St. Vladimir . In Purkyně's honor, the Jan Evangelista Purkyně University Ústí nad Labem , founded in 1991, was named after him; previously the present Masaryk University in Brno had been named after him since 1960 . He was a member of the Royal Bohemian Society of Sciences .

On the Karlsplatz in Prague's New Town , a monument to the major scientists recalls. 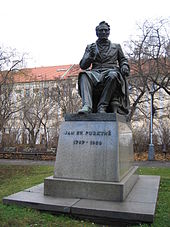 Purkyně has published more than 80 articles in German, Latin, Czech and Polish, including translations by Friedrich von Schiller (lyric poems) into Czech.