Plütscheid is a municipality in the Eifelkreis Bitburg-Prüm in Rhineland-Palatinate . It belongs to the community of Arzfeld .

Plütscheid is located in the western Eifel , only a few kilometers east of the state border with Luxembourg . 38.6% of the municipal area is used for agriculture, with 50.3% the largest part is forest (as of 2011). The Ehlenzbach flows through Plütscheid .

Neighboring communities are Hargarten in the north, Feuerscheid in the east, Oberweiler in the south and Lambertsberg and Mauel in the west.

Celtic ramparts on the Plütscheid district indicate a very early settlement. The name "Plütscheid" is derived from the word Plotiacum , which also refers to a first settlement in the Celtic-Roman period. On the "Hardberg" finds were uncovered that confirm Roman settlement activity.

The first documentary mention as "Pluzei" took place in 1220 in the Maximiner Urbar . Until the end of the 18th century the village belonged to the Electoral Trier office of Schönecken . Plütscheid was the main town of a dairy , which also included the towns of Greimelscheid and Staudenhof and the Maueler Mühle.

In 1794 French revolutionary troops occupied the left bank of the Rhine . Under French administration , from 1798 Plütscheid was assigned to the canton and arrondissement of Prüm in the Saardepartement . During the Prussian period, the town was administered by the mayor of Dingdorf from 1816 .

The development of the population of Plütscheid, the values ​​from 1871 to 1987 are based on censuses:

The municipal council in Plütscheid consists of eight council members, who were elected by a majority vote in the local elections on May 26, 2019 , and the honorary local mayor as chairman.

Solar park on the Krummenacker

Plütscheid is an agricultural community . Since 1971, when 53 farms were still counted, the agricultural area has decreased from 405  ha to 307 ha (2010), which were cultivated by eleven farms.

Plütscheid has a restaurant with a guesthouse in the middle of the village, which is run as a family business.

The municipality is located to the west of the Waxweiler / Schönecken junction of federal motorway 60 . The village itself is crossed by the state road 33 in an east-west direction, which connects it with Waxweiler , among other places .

The establishment of an “inter-communal industrial area Plütscheid / Feuerscheid” was planned, which lies on both sides of the associations of Arzfeld and Prüm ( ⊙ ). In 2015, a ten megawatt solar park was built in the Plütscheid-Feuerscheid industrial park in Rhineland-Palatinate. The solar park is the first joint project between WIRSOL and the non-profit Bürgerservice GmbH Trier 50.088678 6.439056 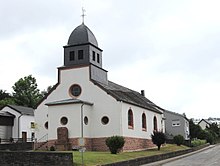