The railway line Węgliniec – Roßlau (Elbe) is an electrified, double-track main line in Poland , Saxony , Brandenburg and Saxony-Anhalt , originally operated by the Berlin-Anhaltische Eisenbahn-Gesellschaft (BAE) and the Oberlausitzer Eisenbahn-Gesellschaft as part of a long-distance connection from Wroclaw after Magdeburg was built. It runs from Węgliniec ( Kohlfurt ) via Niesky , Hoyerswerda , Falkenberg (Elster) and Lutherstadt Wittenberg to Roßlau (Elbe) .

The Berlin-Anhaltische Eisenbahn-Gesellschaft (BAE) was one of the most important railway companies in Germany for more than four decades in the 19th century. In addition to the actual Anhalter main line , it created a network of important rail connections between Berlin and the northern part of the Kingdom of Saxony , the Prussian province of Saxony and the Duchy of Anhalt , which ultimately covered a length of around 430 kilometers.

The construction of new routes by the BAE, but also the growth of the competing railway companies forced a constant adjustment of the traffic offers to the changing demand. After the construction of the direct line from Wittenberg to Bitterfeld, the importance of the Wittenberg – Dessau – Köthen section declined.

The Upper Lusatian Railway Company opened the line between Kohlfurt and Falkenberg on June 1, 1874. The missing gap to Wittenberg went into operation on October 15, 1875 as the BAE line.

In 1878 the Oberlausitzer Eisenbahngesellschaft transferred the management of its section of the line to BAE. From May 1, 1882, the Prussian State Railroad took over operations.

On April 20, 1945, there was an air raid on the Piesteritz train station in which two tank cars exploded, which also caused considerable damage to the nitrogen works . The explosion was so strong that the wheels and axles of the tank wagons were thrown 500 meters to what is now Bundesstraße 187 .

After the end of the Second World War, the route was divided by the Oder-Neisse border ; the Kohlfurt railway junction came to Poland and was given the Polish name Węgliniec. The route remained important for cross-border freight traffic; however, public transport between Horka and Węgliniec ceased to exist in 1945. In 1946, the second track was dismantled in sections.

The train stations and stops in the Sorbian language area have been given additional signage in Sorbian . From then on, these names were also listed in the timetable of the Deutsche Reichsbahn.

At the beginning of the 1960s, the line had to be re- routed between Uhyst and Lohsa because of the opening of the Lohsa opencast mine . The new line was opened on January 11, 1962.

Because of the heavy coal traffic, the line between Knappenrode and Falkenberg / Elster was electrified in the 1980s. Electric train operations began on December 19, 1987 (Hohenbocka – Ruhland) and April 1, 1988 (Knappenrode – Hohenbocka).

In connection with Poland 's accession to NATO in 1999, this rail link was again in a corridor of strategic importance between the North Sea ports and the Upper Silesian industrial area . An increasing volume of freight traffic was forecast and in December 2001 the complete double-track expansion and electrification of the line in the section between the Polish border and Knappenrode was decided.

The local passenger traffic between Horka and Niesky, which was always of little importance and was last handled with class 771 multiple units, was discontinued on December 14, 2002 after it had already been carried out in the last few weeks in the rail replacement service .

Since 2009 there has been a comprehensive renovation including a fundamental renovation of the track and overhead line systems of the Roßlau / Dessau railway traffic junction. As part of this project, a modernization of the train stations in Roßlau, Coswig, Wittenberg-Piesteritz and Wittenberg-West was planned for the following years.

In 2010 took place between Horka and Hoyerswerda a regular schedule service with a steam engine of class 50 .

The Klitten – Hoyerswerda section was closed from December 2010 because the Lausitzer und Mitteldeutsche Bergbau-Verwaltungsgesellschaft (LMBV) carried out planned safety measures on the eastern slope of the Silver Lake in the area of ​​the Lohsa train station . During the tilt stabilization work, there was an increased risk, so that the route that runs directly along the east bank could not be used during this time. After on 8. March 2012 around 200 m long section of the bank had slipped during the renovation work, the end of the safety work was postponed from the end of 2012 to the beginning of 2016. Only then was Deutsche Bahn able to tackle the ongoing expansion of the route in this section as well. Freight trains were diverted via Knappenrode, Spremberg and Cottbus. In passenger traffic, the Hoyerswerda – Niesky – Görlitz line (OE 64) between Hoyerswerda and Horka was served by rail replacement buses until the 2018 timetable change , at Horka station there was a connection to and from Görlitz in the ODEG trains on the Cottbus – Horka– route. Görlitz – Zittau (OE 65).

Extension of the route between the Polish border and Knappenrode

In accordance with the increased importance in freight transport, the complete double-track expansion, the electrification of the line and the increase in the maximum speed to 120 km / h between the Polish border and Knappenrode was included in the Federal Transport Infrastructure Plan 2003 and the rail requirements plan based on it (annex to the Federal Railways Expansion Act ).

Neißebrücke, looking east, in Poland the line has already been renovated and electrified (2009)

The renewed station in Knappenrode was put into operation in 2014, the resumption of rail traffic between Knappenrode and Horka took place at the end of 2018. Because of the crossing points no longer required with continuous double-track operation, the stations Lohsa, Uhyst, Klitten, Mücka and Petershain could get to stops with two platforms each be dismantled, two new platforms and a passenger tunnel were also built in Niesky station. The railway stations Knappenrode, Niesky and Horka were expanded for trains up to 740 meters in length. On 16 km in length, soundproof walls were installed.

Five electronic signal boxes were built. Through the cross-border use of the European train control system ETCS , the full efficiency is to be achieved from 2023. All expansion measures will increase the line capacity from 50 to 160 trains per day.

The financing took place within the framework of the Federal Railways Expansion Act by the Federal Republic of Germany with co-financing by the European Union. The investment volume is around 420 million euros. On the 7th June 2012, another financing agreement was signed between the Free State of Saxony and Deutsche Bahn AG, with the use of 1.6 Million € state funds and in accordance with the corresponding stipulations in the state development plan in the section Horka – Niesky – Knappenrode as the basis for attractive passenger transport offers a line speed of 160 km / h instead of just 120 km / h should be enabled.

On the German section, the expansion began in December 2012 with the renovation of the superstructure and the modernization of the overhead contact line between Knappenrode and Spreewitz (mine railway). From mid-2013, trains to Spreewitz could be electrically powered again. The expansion made it possible to dismantle four of the seven tracks and two side tracks in Knappenrode station.

The extension of the line on the Polish section from Węgliniec to the Neisse bridge has been ongoing since 23. Completed March 2006. The train control system ETCS Level 2 has been operationally implemented by the Polish side since the end of 2015 up to the border, but including digital train radio GSM-R until the start of operation of ETCS on the German side is not in operation in this border area.

The eight-kilometer-long German section to Horka, which adjoins it to the west, including the newly built 143.6 under Polish direction m long Neisse bridge, was opened on 7. Opened December 2016. Since then, the 22nd km long section between Węgliniec and Horka freight yard can be used on two tracks again. The electrification on the German side was delayed until the end of 2018. The cause was an embankment slide on the Silbersee , which made additional work necessary for the route renovation.

The Zweckverband Verkehrsverbund Oberlausitz-Lower Silesia (ZVON) decided at its meeting on 4. April 2017 the resumption of local rail passenger transport between Görlitz and Hoyerswerda for the timetable change on December 9, 2018.

The catenary on the renovated section of the state border – Knappenrode has been under tension since September 7, 2018, and the completed line has been released for test and instruction drives since October 29, 2018. A total of 55 kilometers of line was expanded for double-track operation, and the Horka, Niesky and Knappenrode stations were completely renewed. In addition, 31 railway bridges, four road bridges, 33 crossings and all platforms and access roads were rebuilt and rebuilt. A converter plant was built at Lohsa for the traction power supply . Five electronic signal boxes (EStw) were built to control and secure train traffic, and GSM-R was installed across borders for train radio. A total of around 520 million euros was invested.

Clearance work at the accident site on December 3, 1988

In the night of 15./16. May 1987 two freight trains collided at Schwarzkollm station. 18 wagons derailed, of which 15 wagons loaded with coal overturned.

In 2012 and 2013, two further accidents involving freight trains occurred at Hosena station, each of which resulted in line closures lasting several days. 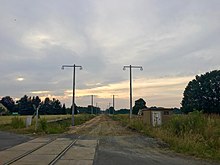 Expansion at Litschen, the catenary masts for freight traffic are already in place (2016)

The route is currently being used by regional trains operated by DB Regio Südost between Dessau Hbf and Falkenberg (Elster). The trains need around 80 minutes for the 91-kilometer route and are partially connected from Wittenberg or Dessau to Leipzig-Stötteritz. In rush hour traffic, additional trains complete the offer, these run between Dessau Hbf and Lutherstadt Wittenberg and only serve individual traffic stops. Since the timetable change in December 2011, individual trains have already ended up in Lutherstadt Wittenberg and Annaburg with low demand . Bombardier Talent 2 railcars replaced push-pull trains made up of class 143 locomotives with at least two double-decker cars when the timetable changed in December 2015 .

The RB 64 line (Hoyerswerda – Görlitz) has been running every two hours since December 9, 2018. The brand name Seenland-Neisse-Shuttle (Sorbian Shuttle jězorina-Nysa ) was found in a competition organized by the ZVON.

The railway line is also important for freight traffic. The Piesteritz nitrogen works, for example, ensure a brisk volume of traffic, which has extensive freight track systems in the Lutherstadt Wittenberg-Piesteritz area.

The route also plays an important role in cross-border freight traffic. Once all construction work has been completed, one of the most important west-east freight connections is to be created. In this context, one speaks of a freight highway . In the spring of 2011, the siding of the PCI Augsburg company was reactivated by laying a new track and dismantling the old one. The siding is at the western end of the SKW Piesteritz freight yard. 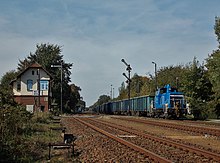