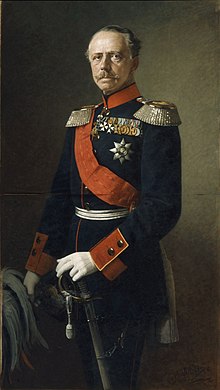 The Großherzoglich-Sächsische Kunstschule Weimar was an educational institution with an artistic orientation founded by statute from October 1, 1860 by Grand Duke Carl Alexander von Sachsen-Weimar , which had existed until 1910. After that, after reorganization, it was raised to the rank of art college and was henceforth called the Grand Ducal Saxon University of Fine Arts in Weimar . It is not to be confused with the Princely Freyen Drawing School , which existed from 1776 to 1930 and, from 1860, prepared its students in a preliminary stage for admission to the art school. The former is the origin of today's Bauhaus University Weimar .

The Weimar School of Painting

In terms of art history, the term Weimarer Malerschule stands for a major trend in landscape painting in Germany from 1860 to 1900, which had its roots in the Barbizon school and is its German counterpart. It is the epitome of landscape painting in teaching, which had turned away from the tradition of studio painting and the requirements of neoclassicism and switched to open-air painting . In terms of art history, it is unique because the teachers at the painting school had turned away from the traditional view of landscape painting directly and neither through a counter-movement established outside the painting school, such as an artists' colony operating on their own, nor a Secession movement .

Weimar as an art center

Since 1776 the Princely Freye Drawing School was founded on the private initiative and with the help of Duke Karl August von Sachsen-Weimar-Eisenach . It made sense to encourage local craftsmen to improve the quality of local products in order to survive better on the market. After 1860 she took on the pre-school function for the Weimar School of Painting. It was here that the decision was made as to whether the candidate was accepted as a student in the Weimar School of Painting.

At the beginning of this painting school in 1860, the hierarchy of the subjects offered was abolished, which went hand in hand with the abolition of the hierarchy in the teaching body. This mainly concerned history painting, the genre and landscape painting, which were always valued at the art schools of that time. In addition, there was no class division and the students could choose their teacher themselves. This enabled the teacher to support his students individually throughout their stay. These major changes were only recorded in writing 14 years later, together with the patron, the Grand Duke.

A broad canon was offered to the students. Among other things, it included the subjects

At the beginning of the course, drawing in the antique hall was a must.

The entire faculty took part in the appointment process for a new apprenticeship position. The final decision, however, remained with the sovereign.

This small painting school had 44 students in 1882 and 63 students by the winter semester 1887/88. Because of the achievement of its capacity, the number of students was limited from 1888. This capacity problem already existed in the 1960s when the administration decided in 1866 to look for new studio space in Weimar because the existing space was no longer sufficient. The annual fee, i.e. for two semesters, was 80 marks at the time. From 1895 this school was opened for the first time to aspiring artists. 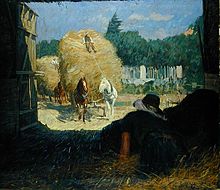 Carl Malchin (1882): - Use of the first threshing machine in Lankow near Schwerin, Dt. Historical Museum, Berlin.

On October 1, 1860, the Grand Duke Carl Alexander von Sachsen-Weimar-Eisenach founded the Grand Ducal Art School in Weimar together with the painter Stanislaus Graf von Kalkreuth . Initially, this art school was financed by the sovereigns themselves. In 1874 the first director, Count von Kalkreuth, resigned from his post. One of the decisive factors was tensions with the sovereign, which had their cause in the chosen path to training, the choice of teachers and the relationship with the Princely Freyen drawing school. His successor was the landscape painter Theodor Hagen , who pushed the opening of the education in the painting school in the direction of the Barbizon school.

Since 1866, works by representatives of the Grand Ducal Art School have been shown in the art building and at national and international exhibitions. This was done through direct support and support from the administration. In 1879 the great breakthrough of the Weimar School was to take place at the II. International Art Exhibition in Munich. It was a landscape painting by Theodor Hagen, which received special attention from the audience and critics. The name of the Weimar School of Painting finally emerged from the shadows and gained a very high status in Germany. The reality-oriented color and light treatment in panel painting was essential for the Weimar School.

In 1881 Theodor Hagen also resigned as director. He also faced the same problems as his predecessor and was not prepared enough for administrative work.

In 1889, Emil Heilbut's lecture brought movement to the conception of teaching in the orientation of students and freelance painters. In addition to his lecture on French Impressionism, he showed three works by Claude Monet .

The most famous student of the Weimar School of Painting was Max Liebermann . In addition to Lovis Corinth and Max Slevogt, he is one of those artists in Germany who played a decisive role in the development of Impressionism .

In 1892 an art exhibition was held for the golden wedding of the ruling couple. This happened in connection with the opening of the new skylight hall in the exhibition area. Works of art from French Impressionism were shown, for example by Charles-François Daubigny , Jean-François Millet and Théodore Rousseau . This show was a great success.

The winter of 1900/1901 should mean the end for the Weimar School. Its sponsor and patron, Grand Duke Carl Alexander von Sachsen-Weimar-Eisenach, died on January 5th, 1901, and so the essential driving force was missing. Even if his successor initiated restructuring in accordance with the new social, cultural and industrial challenges, the Grand Ducal Saxon University of Fine Arts in Weimar, which existed from 1910, could no longer bring back the old marriage with its successes. In addition, the main heads of art education were either no longer involved in teaching for reasons of age or had died in the meantime. This was followed by a new generation of teachers who had opened up to the modern age , i.e. in the spiritual tradition of the teachers at the old Weimar University to open up to art.

In 1901, the art school was subordinated to the ministerial department of the Grand Ducal House and thus converted from one privately run by the former sovereign into a state institution .

Walther Scheidig (1902–1977), who was head of the State Art Collections in Weimar for many years, worked through the work of the Weimar School of Painting .

The Weimar School of Sculpture as successor

Walter Gropius , who was still employed by Wilhelm Ernst, founded the State Bauhaus in Weimar in 1919 , from which the State University of Fine Arts was spun off on April 1, 1921 and then completely dissolved in 1925. Under Otto Bartning (1883–1959) the existing Weimar institutions were combined to form the State Building College and College of Crafts and Architecture . A reorganization as state universities for architecture, fine arts and crafts in Weimar took place under Paul Schultze-Naumburg (April 1, 1930). Ten years later, under the direction of Gerd Offenberg , the University of Architecture and Fine Arts was established with the rank of a technical university. Hermann Henselmann (1905–1995) continued to run the university from 1946 to 1951. The subsequent University of Architecture and Construction has been extensively restructured since the political change in 1989 and since May 17, 1996 has had the traditional name of Bauhaus-Universität Weimar .

The art school building (also known as the “studio building” ) was built in two construction phases in 1904/05 and 1911 opposite the arts and crafts school building from 1905/06 on what was then Kunstschulstrasse according to plans by Henry van de Velde . Both buildings are committed to Art Nouveau and are an expression of the beginning renewal of the architecture on the basis of a functional and material-appropriate design. When the Bauhaus was founded in 1919, it is one of the most important art school buildings of the turn of the century. Particularly noteworthy in the interior of the building are the wall designs by Herbert Bayer and Joost Schmidt , the skylight hall, the elliptical staircase and the "Eva" by Auguste Rodin .

In December 1996 the art school building was added to the UNESCO World Heritage List together with the arts and crafts school building (Van-de-Velde-Bau) . In 1999, the renovation under the direction of the architect Thomas van den Valentyn largely restored the original condition, including the Gropius room (director's room by Walter Gropius ) designed in 1923 as a "total work of art" for the Bauhaus exhibition in 1923 , which existed in its original state until spring 1925 .

As the main building of the Bauhaus University Weimar at Geschwister-Scholl-Straße 8, it is used today by the Faculty of Architecture with the Dean's Office, the Faculty of Design and the Rector's Office.

This list is ordered by the date of the appeal. It does not claim to be complete.

Further students at the Weimar School of Painting 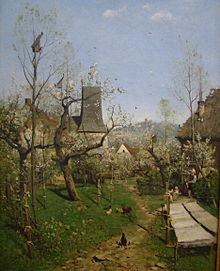 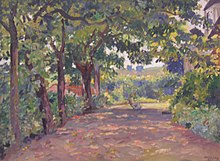 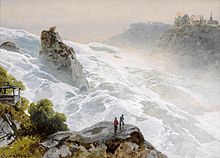 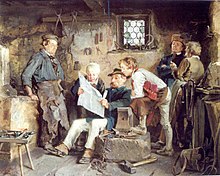 If you go through the list of enrolled students, you will notice that a number of students from other painting schools had continued their studies at the Weimar School. This shows that the reputation of this art school even went beyond the national borders. The following are particularly well-known:

Important representatives of the Weimar School of Painting

Artists who attended the Weimar painters' college or college after 1900