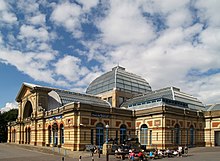 Alexandra Palace in London, venue of the Masters 2019

The Dafabet Masters 2019 was an invitation tournament and part of the 2018/19 season of the Snooker Main Tour . It took place from 13 to 20 January 2019 for the 45th time in total and for the eighth time at Alexandra Palace in London . The winner was Judd Trump for the first time , who beat Ronnie O'Sullivan 10: 4. It was Trump's second final win of the season over O'Sullivan. Eight years after winning the UK Championship , he secured the second Triple Crown title .

The prize money remained unchanged compared to the previous year.

The "Rolling 147 Prize" for a maximum break is not awarded at the Masters because it is an invitation tournament. The prize money awarded was therefore not included in the world rankings .

The 16 top players in the world rankings played for the Masters title for eight days. The tournament was opened on Sunday, January 13th, by defending champion Mark Allen .
8 of the 16 players were seeded and therefore got fixed positions in the tournament tree.

Luca Brecel defeated the defending champion in the first game in the Decider, but then lost to Ding Junhui in the decision frame. In the semi-finals, Ding met Ronnie O'Sullivan and had almost lost the game before the break. Although he was able to reduce the 0: 4 deficit, O'Sullivan finally reached the final with 6: 3. In the second semifinals, Judd Trump met Neil Robertson . While Trump had clearly beaten world number one Mark Selby , Robertson had taken reigning world champion Mark Williams out of the tournament in round 1 . In a game that was broken up at times, Trump won 6: 4 and made it into the Masters final for the first time in his career.

Ronnie O'Sullivan was in the final for the fifth time this season. He had only lost once: two months earlier at the Northern Ireland Open against Judd Trump . The 29-year-old also dominated the afternoon session, O'Sullivan only scored his first points in the third frame, and at break he was 4-0 down. He won the first frame after the break, then Trump took over again and extended the lead to 7-1. In the evening O'Sullivan tried to shorten and use Trump's mistakes consistently, but every frame gain was followed by a frame for Trump. In the 14th frame, O'Sullivan made a hole error and Trump finished with a 53 break to 10: 4 victory. In the 9th final match between the two players, it was Trump's 6th victory. For O'Sullivan it was the biggest defeat in the final since the 2005 Grand Prix , where he lost 9-2 to John Higgins .

24 breaks of 100 or more points were scored by 9 players in the tournament week. Luca Brecel scored the highest tournament break with 140 points in Round 1 and received the extra bonus of £ 10,000. Also in round 1, Barry Hawkins made the 300th century break of his career. He reached this mark as the 20th player. Ronnie O'Sullivan and Ding Junhui each got 5 centurys.

Tournaments of the 2018/19 snooker season