Thundorf (in the local dialect : [ ˈtuəndɔ (ː) rfˑ ] or [ ˈtuəndərəfˑ ]) is a village and a political municipality in the Frauenfeld district of the canton of Thurgau in Switzerland .

1803-1994 which formed local churches Lustdorf and Thundorf the Munizipalgemeinde Thundorf. In 1995 these merged with the local community Wetzikon (TG), which was separated from the municipal community of Lommis, to form the political community of Thundorf.

Today's municipal area includes, for example, the upper Thunbachthal with the surrounding, wooded hills that stretch in the north from Stählibuck to the east over the Grüt to Wachtbühl above Lustdorf , while in the south only the northern slope of Immenberg and Wetzikon with the Holzacker belong to Thundorf .

The village of Thundorf is located about 550 meters above sea level northwest of the confluence of the Lommisbach in the Thunbach, the valley of which opens here in a slight curve to the southwest. The church settlements of Kirchberg , Ufhofen and other hamlets are located on the soil of the local community of Thundorf, which existed until it was united with Lustdorf and Wetzikon .

Thundorf and Lustdorf are accessible from Frauenfeld and Weinfelden by a post bus line.

The first mention of Thundorf can be found in a document dated August 1, 888 ( in villa, quae dicitur Tuomdorof ), in which Arnolf of Carinthia confirms the donation of the Erchingen farm with the surrounding properties to the Reichenau monastery . The place name is a combination of the Old High German personal name Duomo / * Tuomo with the basic word village , which is very common in Alemannic settlement names and can mean 'Weiler, Hof, Dorf, Gut, Stadtviertel'.

In 1093 and 1116, an Immo von Thundorf and his son Lütold appear as witnesses for donations to the Allerheiligen monastery in Schaffhausen . In 1247 a nephew of the canon Friedrich von Beromünster appears as a job-seeking priest named Rüdiger von Thundorf , who in 1259, now himself canon of Heiligenberg near Winterthur , is a documentary witness for the Töss monastery .

Vogteirecht and Kehlhof zu Thundorf were in 1361 as fiefs of the Habsburgs with the court masters of Frauenfeld . Later, the advocacy has been the rule Weinfelden pledged and went in 1466 to Hans von Wängi over which they caused in 1492 again. In 1527 the jurisdiction of Thundorf was sold to Joachim von Rappenstein and from then on it was administered jointly with the Wellenberg rule , which in 1537 went to the Lords of Ulm, then first to Heinrich Eschern in 1669 and finally to the city of Zurich in 1694 , where it was repealed until 1798 stayed. From the year 1463 an opening handed down, in which the jurisdiction of the court, the court days, various criminal provisions, the duties and services responsible for the gentlemen and a tavern right are laid down. From 1527, the opening was partially aligned with the legal norms of Wellenberger. Since the late 17th century, a municipal code given by the residents of Thundorf has been documented.

A folk priest has been attested to in Thundorf since 1275 . The church set was auctioned after the death of the heavily indebted Kaspar Hofmeister in 1486 and was bought by the community in 1495. In 1496 the collection was acquired by the Thundorf-Kirchberg parish. The Reformation took place between 1528 and 1530 . A school lesson given by the pastor is documented for 1631. School attendance has been free of charge since 1717. The first school and community building dates from around 1700 and was enlarged around 1805. In 1844 the neo-classical new building with turrets south of the main street was moved into. 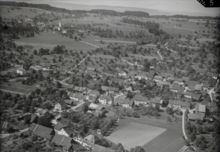 After the administration of Thundorf in Helvetic Republic was initially transferred to an agency in Horrenwylen and from 1800 to Kirchberg, in 1803 the town and Lustdorf formed the new municipality of Thundorf. The Wellenberg Castle with its goods in 1873 was separated from Thun village and to the community Wellhausen connected.

In addition to arable farming, Thundorf also had cattle and dairy farming. The dairy was established in Aufhofen in 1900. The Bachmann wine trade existed in the 19th century. Fela AG has been producing printed circuit boards in Thundorf since 1967 and recording devices for the performance-based heavy vehicle tax since 1999 . In the 20th century, the community grew through the construction of numerous houses.

In 1995, today's municipality of Thundorf was created through the union of the three local communities Thundorf, Lustdorf and Wetzikon, which was part of the Lommis municipality from 1803 to 1994 .

The first description of the coat of arms from 1840 reads: "A stream, the Thun and three stars , representing the villages of Thundorf, Kirchberg and Aufhofen." The adaptation to the current heraldic rules and the codification of the colors red-white-red led to the current version Blazon : a white bar in red accompanied by three hexagonal stars (2/1).

The white bar in red is the flag of Austria , which Kehlhof, Vogtei and Kirchsatz had awarded the court masters of Frauenfeld. The three stars were taken from an older coat of arms.

In 2016, Thundorf offered work to 276 people (converted to full-time positions). 38.0% of these were employed in agriculture and forestry, 40.7% in industry, trade and construction and 21.2% in the service sector.

The community is run by a seven-member council.

The Stählibuck Tower was built in 1908 on the initiative of the Frauenfeld Tourist Office.
See also : List of cultural assets in Thundorf

Political communities in the Frauenfeld district