The Paray-le-Monial – Givors-Canal railway is originally a double -track, now single-track, non-electrified railway line in France . It is northwest-southeast oriented, 134 km long and an important link of the Region Center-Val de Loire in the metropolitan area of Lyon , where she primarily serves the transportation. In addition, it represents the shortest connection for cross traffic between Lyon and Nantes and serves as an alternative route to Moulins , but above all it relieves the main line Paris-Lyon from freight traffic. The section between Brignais and the south-eastern end point Givors is no longer served by passenger traffic.

This railway line is part of the France-wide Freycinet route plan . With the law of July 17, 1879, with which 181 new railway lines were to be added to the network, this line was given legal status as number 117. For the alignment it said: "from Givors to Paray-le-Monial, at or near l'Arbresle". The choice of the route reflects the close, sometimes competing connection between railways and waterways that still existed in the second half of the 19th century. Givors Canal was an important hub for goods of all kinds.

With the law of November 20, 1883, the agreement previously signed on May 26, 1883 between the Compagnie des chemins de fer de Paris à Lyon et à la Méditerranée (PLM) and the Minister of Transport and Public Works became formally legally binding and the Lozanne route –Givors finally confirmed.

On October 4, 1895, the middle, approx. 30 km long section Lozanne - Lamure-sur-Azergues went into operation. In Lozanne there was a railway connection with the Coteau – Saint-Germain-au-Mont-d'Or railway since the end of the 1860s; on September 1, 1900, the Lamure-sur-Azergues part followed Paray-le-Monial . Lozanne – Tassin only went into operation on November 25, 1906, and finally the last stretch of the Tassin – Givors Canal on June 1, 1910. All sections of the route would be double-tracked from the start. 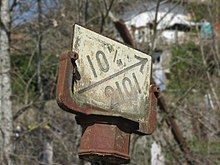 Inclination pointer at the former Grandris-Allières station, 2019: 21 m gradient over the next 2.1 km

Even if the freight traffic on this route was satisfactory, the number of passengers remained modest, especially on the southern part of the route between Tassin and Givors. On January 1, 1934, passenger traffic between Brignais and Givors was consequently suspended and only three years later, on January 1, 1937, between Tassin and Brignais. In the course of the electrification of neighboring routes, the traffic there was accelerated and the capacity increased, so that here, on this non-electrified route, the traffic decreased.

The second track was removed with the decline in traffic in the winter of 1997/98 - with the exception of the Tunnel des Écharmeaux . Train crossings are now only possible in Lamure-sur-Azergues , Lozanne , Dardilly-le-Jubin , Tassin and Francheville .

The increase in population due to urban sprawl and expansion of urban space around Lyon led to the resumption of passenger traffic on the section between Tassin and Brignais, which ended in 1937. In 2014, regional transport trains took 90 minutes to travel the Paray-le-Monial – Lozanne section, came from Nevers or Moulins and all ended in Lyon-Perrache .

Between 2009 and 2012, the section between Tassin and Brignais was extensively modernized as part of the Tram-Train Lyon West renewal project . The superstructure, the platforms and the signaling technology were renewed and the electrification was added. An additional bend east of the Tassin train station ensures that both branches of the route are directly accessible from the Lyon-Saint-Paul train station . Then it became possible that trains of the Lyon tram could use the tracks of this railway line . Citadis Dualis cars have been in use since then .

The construction of this line was from a military strategic point of view when it was initiated by Charles de Freycinet in the second half of the 1870s . So it was about large cargo handling and high tonnage. Accordingly, the line was designed with two tracks and only a slight gradient of a maximum of 11  ‰ . This required the construction of long ramps, wide curves and loops. The most striking example and rather rare in a typical low mountain range is the Boucle de Claveisolles , a roundabout about 1.25 km × 1.5 km in diameter in the municipal areas of Claveisolles and Saint-Nizier-d'Azergues . The 591 m high La Roche is circled almost concentrically by this full circle loop.

Many more engineering structures were required. The longest tunnel, which is still one of the ten longest in France, is the 4,153 m long Tunnel des Écharmeaux , which is also the apex of the route. The longest bridge structure is the 60 meter high and 561 m long Viaduc de Mussy , on which the route crosses the Mussy valley . Its 18 arches have a span of 25 m each.

Once this route was completed, it became attractive for other transport infrastructure companies to join it. This created a number of connections (from north to south):

with route numbers shortened to the first three digits