The title of this article is ambiguous. Further meanings are listed under stock exchange (definition of terms ) . 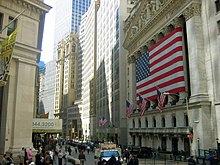 An exchange is a market for standardized trading objects organized according to certain rules .

For example, securities (such as stocks , bonds ), foreign exchange , certain commodities (e.g. agricultural products , metals and other raw materials ) or with rights derived therefrom can be traded . The exchange brings together supply and demand - mediated by stockbrokers or lead brokers (during fixed # trading hours ) - and balances them out by (official) fixing of prices ( stock exchange prices ). The determination of the courses or prices of the traded objects is continuously based on supply and demand.

An exchange serves the temporal and local concentration of the trading of fungible items with supervised pricing . The goals are increased market transparency for effects , an increase in efficiency and market liquidity , a reduction in transaction costs and protection against manipulation . In contrast to over-the-counter trading (also called OTC trading from English over the counter ), stock exchange trading is controlled by state supervisory authorities (in Germany: the Federal Financial Supervisory Authority (BaFin)) and by the trading surveillance offices of the stock exchanges.

The controlled in ISO 10383 market identification code each exchange is just like any other trading platform world clearly identifiable. For buyers and sellers of financial products, the exchanges take on the important function of the central counterparty .

There are various literary opinions about the origin of the word. The Burse was a community that lived from a common fund , as was the name given to its accommodation. The word stands for “leather bag, sack of money” ( Latin bursa ), which in turn goes back to ancient Greek βύρσα (býrsa) for a peeled animal skin or fur. Some historians associate the term with Byrsa , a hill with a walled fortress over the port of the ancient city of Carthage in what is now Tunisia .

A version of the origins of the name that has been handed down for centuries says that the Bruges- based merchant family Van ter Beurze (Buerze, Buerse) , whose name first appeared in 1257 and whose house has been mentioned very often since 1285 as "ter Buerse" or "ter ouder Buerse", regularly held business meetings with - mainly Italian - businessmen in her house. Her coat of arms showed three purses. From 1409 this exchange brokered absent goods and bills of exchange . The Flemish surname was transferred from the house to the meeting itself in the Dutch word for purse ( Dutch beurs ) and was also adopted in other European languages ​​in the following years, where it still occurs today, for example, German  stock exchange , French bourse , Italian borsa or Danish børs .

From Bruges, commodity exchanges spread worldwide, in 1414 in Antwerp , 1531 in France ( Toulouse , French bourse de commerce ; 1549 in Lyon , French la Change ; 1550 in Rouen , French convention ) and Germany ( Augsburg Stock Exchange ), 1571 in England ( London ; English exchange ) or 1611 in the Netherlands ( Amsterdamer Börse ; as a commodity exchange Dutch goederenbeurs ). The first commercial Paris stock exchange existed in 1639 when the functions of the commodity and stock exchange were separated. A decree of April 2, 1639 gave the dealers the designation stock traders ( French agents de change ), whose official trade was given the designation "parquet" ( French parquet ). Since then, every trading floor has been referred to as floor and trading therein as floor trading .

Important types of exchanges broken down by type of trading item are:

Other types of exchanges or similarly organized markets are:

Exchanges can also be differentiated according to whether they have an organized trading system that is organized according to a pure auction system (such as secondary stocks and open market on Deutsche Börse ), a market maker system such as NASDAQ, or a mixed system such as the NYSE disposes. Market-maker systems ( English quote driven system ) are characterized in that the continued presence of market makers daily for the execution of all securities orders ensures by buying or such orders even from its own stocks for each quota sold. The auction principle ( English order driven system ) requires the existence of corresponding orders for the specified market price and the corresponding quantity for every transaction . For a buy order, there must be a corresponding sell order or vice versa, in which the counterparty's price and quantity requests can be met for at least one counterparty.

The classic form of the exchange was the floor exchange (also called floor trading ). There the brokers met in person and concluded their deals through talks. Computers moved in in the 1990s, order routing has been electronic ever since, and trading is supported by programs.

With computer exchanges such as the fully electronic Xetra trading platform , a computer program takes over the calculations and communication. Here entries are made via dialog windows; the computer system processes the trade and calculates the rates (e.g. the daily average). The majority of sales are currently processed worldwide via computer-aided stock exchanges, with the brokers themselves sometimes sitting at their screens.

For the processing of delivery and payment, some non-codified (uncommitted) practices have developed between the market participants . In addition, instructions from the Federal Financial Supervisory Authority ( Bundesanstalt für Finanzdienstleistungsaufsicht) on the minimum requirements for trading in securities (for example, shares and bonds) have been published in Germany recently .

A distinction is made according to the type of transaction:

In addition, special unwritten trading customs , so-called stock exchange usages , which are based on voluntary and continuous actual practice, apply on the stock exchanges . In contrast to normal transactions, it should be possible to obtain immediate legal certainty in fast-moving stock exchange trading , so that the subsequent cancellation of securities transactions ( cancellation ) due to e.g. B. Errors are only possible within a very limited period of time (customarily between 30 minutes and 2 trading hours) (see Mistrade for deadlines for mistrade applications).

Various capital market rules require the publication of certain events that are relevant to stock market events. Listed companies and securities issuers must publish these announcements in the mandatory sheets of the relevant stock exchanges. Pursuant to Section 32 (5) of the Stock Exchange Act, the admission office of a stock exchange determines at least three domestic daily newspapers with supraregional distribution as supraregional stock exchange reports . In addition, it can name other (regional) mandatory stock exchange papers.

The Munich Stock Exchange has set the following mandatory stock exchange gazettes for the years 2021 to 2022: 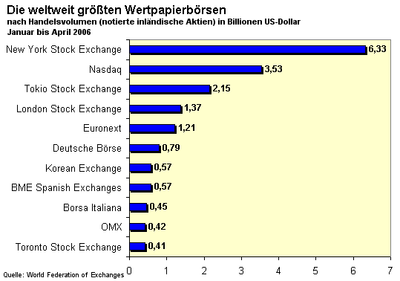 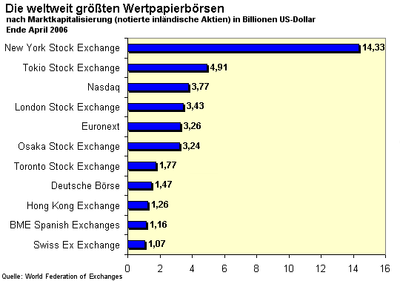 With a daily transaction volume of around 2 trillion US dollars, the world's stock exchanges are  a decisive factor in the global economy. 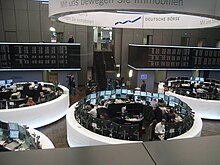 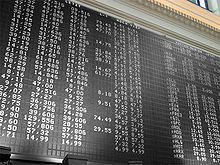 Price board in the Hamburg Stock Exchange

In Germany there are eight stock exchanges, one power exchange ( EEX ) and one futures exchange ( Eurex ).

In addition, there are seven other stock exchanges in Germany (which apart from gettex, Tradegate and EEX are also referred to as regional exchanges ). Among these, the Stuttgart Stock Exchange (Baden-Württembergische Wertpapierbörse) is the second largest trading center with an average share of 34 percent of the order book turnover in German floor trading. The trading of securitized derivatives such as warrants (trading segment Euwax) is of particular importance . Fund trading is very important on the Hamburg / Hanover stock exchange, which ranks third among the German stock exchanges under the joint sponsoring and operating company Börsen AG .

After the Bremen Stock Exchange was dissolved in 2007, the following German stock exchanges existed in addition to the Frankfurt Stock Exchange:

The majority of trading takes place over the counter. Around half of the total volume in Germany and around two thirds in the USA. A significant part of the transactions are covert and not public. Dark pools are a special form of trading venues that are used to darken the order backlog and market participants. This lack of transparency is particularly in the interests of institutional investors. In the USA, the share of pure dark pools in the volume handled almost doubled from 8% to 15% between 2008 and 2014. Since this type of trading corresponds to a customer need, dark pools are also offered on the regular exchanges. The Swiss Exchange SIX operates Liquidnet Service and the Deutsche Börse Xetra Midpoint . Big banks like UBS and Credit Suisse also operate their own dark pools.

In 12th century France, the courretiers de change were active in managing and regulating the debts of agricultural communities on behalf of the banks concerned. Because these men also dealt in debt, they can be called the first brokers. According to a widespread misconception, commodity traders met in Bruges in the late 13th century in the house of a man named Van der Beurze, from whom the Brugse Beurse is said to have emerged in 1409 . Until then it was an informal meeting, but actually the Van der Beurze family had a building in Antwerp where these meetings took place.

The first exchange was founded in Bruges in 1409 . It was an exchange exchange, an institutionalized trading place for long-distance traders for bills of exchange . In 1531 a centrally located permanent building was built, which was named "Byrsa Brugensis" (Bruges Stock Exchange) in contemporary city maps.

The stock exchanges in Augsburg and Nuremberg were the first to be established in Germany in 1540. In southern Germany, however, the term “stock exchange” was not used for a long time; people spoke of “space”.