A drag queen is a man who represents a woman with artistic or humorous intent through appearance and behavior.

A drag queen differs from a travesty artist in that he slips into various female roles and also imitates or parodies prominent women, while the drag queen has a fixed role with her own "drag name". The transitions are fluid and there are also combinations. In both cases, a man can temporarily represent a woman, but still define himself as a man. This distinguishes drag queens and travesty artists from people whose psychological gender identity does not match their biological gender. 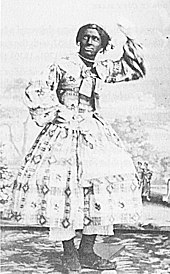 Minstrel artist in women's clothing, around 1855

A drag queen usually wears very feminine clothes, elaborate makeup, high-heeled shoes and sweeping wigs. Drag queens are mainly to be found in the gay scene in the big cities. At political parades and festivals such as Christopher Street Day , drag queens also appear for the non-scene population.

Many drag queens see their appearance as a sociopolitical statement: They want to show society that there is also a kind of third gender within the heteronormative bipolar gender system (man-woman) . So many drag queens past and present are not just flashy disco queens, but also function as figureheads in the homosexual movement .

The counterpart, a woman representing a man, is a drag king .

The term drag queen probably originated from British slang around 1900 and described effeminate homosexuals in female clothing. A little later, the term dragking was added as a term for mostly lesbian women in typically male clothing.

The definition of the English word "drag" as "dragging" is more likely because of the train on long clothes. - In English (alluding to the often very elaborate, pompous costumes and the eye-catching makeup) the term "doing drag" has become a term for someone who changes their gender role with their clothes.

One of the most famous German drag queens is Olivia Jones alias Oliver Knöbel. In 2004 he ran for the Hamburg parliament and received 0.5% of the votes. 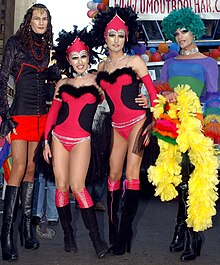