from Wikipedia, the free encyclopedia
This is the spotted version , flagged on July 24, 2020 . There is 1 pending change that has yet to be viewed.

The cathedral school in Münster is said to have been founded in 797. However, one cannot refer to a documentary mention, but to a decree of Charlemagne from 789 to set up a school in all monasteries and bishoprics . This should also have been the case in Münster, which at that time was still called “Mimigernafort”. The monastery was consecrated to St. Paul by Liudger in 797 , which is considered to be the beginning of the schola paulina .

This monastery school was reformed from around 1500 by Rudolf von Langen and Hermann von Kerssenbrock in the spirit of humanism and became a leading educational institution in northwest Germany with a presence in the Netherlands and the Baltic Sea .

In the course of the Counter Reformation , the Jesuits took over the Paulinum in 1588 and ran the school in the Jesuit College in Münster until the order was dissolved in 1773 . At that time the school was called the Collegium Monasterium.

Afterwards, Franz von Fürstenberg in particular, as minister and vicar general of the prince-bishop, shaped the redesign of the Paulinum under the sign of the ( Catholic ) Enlightenment . Close personal ties with the university , the foundation of which was laid with the granting of the privileges of a state university in 1773, ensured a high standard of teaching, which also qualified the Paulinum for the enlightened school reformers to test new subjects and methods (including the introduction of history - , math and geography lessons; upgrading of German language lessons).

Even when Münster became Prussian in 1815 , the Paulinum de facto remained a kind of state high school with a central function: Here school reform processes were tried out, which were later to be implemented in the other schools in the region.

The city of Münster did not take over the Paulinum until 1974, and co-education was introduced in 1978 . The grammar school has been participating in the self-employed school trial since 2002 and is trying to create its own profile based on humanistic tradition.

The age of the Carolinum grammar school in Osnabrück is comparable to that of the Paulinum. Therefore, since 2001, the title of “Germany's oldest school” has been awarded during a soccer game between these two schools.

On October 9, 2007, the Paulinum, together with 15 other schools from North Rhine-Westphalia, was one of the first schools in the state to be named a European school . Since April 2009 the Paulinum has also been an "IB World School" and is allowed to prepare students for the International Baccalaureate Diploma (IB) during the qualification phase . The lessons for this take place in English.

In the Middle Ages, the Jewish cemetery of the city of Münster was located on the current site of the school . This was leveled after the pogrom after the plague wave in 1350. The only surviving memorial stone from 1324 is in the synagogue of the Jewish community of Münster, after it was in the meantime at the newer Jewish cemetery in Münster . This is the oldest surviving Jewish tombstone in Westphalia. In 2015, the school's art course designed a memorial stone to commemorate the cemetery, which was erected on the school premises on April 29, 2015, after the financing of the 4,000 euro project was made possible by a sponsor from the economy. 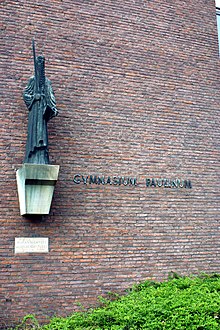