The Imhoff family coat of arms

The "Imhoffsche Handelsgesellschaft" was one of the most important in the imperial city, it maintained branches and trade connections throughout Europe and financed European courts with loans. The family also appeared as patrons in Nuremberg with numerous donated works of art.

The family comes from Lauingen in Swabia and is occupied from the middle of the 13th century with Hans im Hof (* around 1260, † 1341), member of the council of the city of Lauingen. He was married to Anna von Gundelfingen († 1386) and the family line begins with them . Sigmund I was mayor there in 1277. It is possible that the Imhoff was originally a family of ministers from the Staufer family . Their parent company was on the Lauinger "Hofmarkt". The knight Ulrich in the court appears in 1316 as ministerial of the bishop of Augsburg and in 1333 and 1342 in a document near Lauingen.

After the death of the last Staufer Konradin in 1268, Lauingen fell to the Bavarian Duke Ludwig the Strict ; Several patricians then left the city, including the Imhoff sons Konrad and Hans II († 1389) as well as the Pirckheimers, Scheurl , Oelhafen and others, who were related by marriage to them , to settle in the free imperial city of Nuremberg. Hans II married Lucia Groß , a granddaughter of the famous patrician Konrad Groß , and was accepted as a citizen as well as one of the "councils and judiciaries" and thus became part of the ruling Nuremberg patriciate . As early as 1376 he received an imperial loan in Schwarzenbruck , which the son Hans III. inherited. The sons Konrad († 1396) and Ulrich († 1413) started trading with Venice, Niklas († 1418) was already mayor of Nuremberg. The oldest residential and business location in the city was a block of houses on the corner of Brunnengasse and Königstraße.

Hans' II. Brother Heinrich was the progenitor of the widely ramified Swabian line, which died out in the 16th century. Carriers of the name Imhoff can also be found early in Augsburg (1396), Ulm (1422), Donauwörth (around 1425) and Memmingen (1441). Up to the beginning of the 15th century there is reports of a close cohesion of the family branches and a constant return to Lauingen as the origin of the family, including the associated land in Gundremmingen . Regine Imhoff († 1526) from the older Augsburg branch was the mother of Anton Fugger . 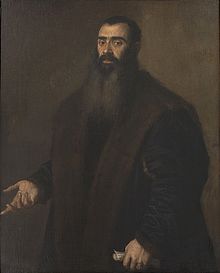 The Imhoff prospered through long-distance trade, as they supplied the markets and trade fairs in Frankfurt, Cologne, Strasbourg, the Upper Palatinate and Bohemia from Lauingen. The Nuremberg "Imhoffsche Handelsgesellschaft" was first mentioned in 1381 in the trade between Venice, Nuremberg and Eastern Europe. Like Groß , Mendel , Pfinzing and Pirckheimer , she worked closely with Stromer's trading company , from whose bankruptcy she profited in 1430 and emerged as one of the beneficiaries. Konrad's († 1396) son of the same name, Konrad († 1449), bought the share of the Mendel Chamber of Commerce in the “ Fondaco dei Tedeschi ” in Venice in 1441/48 . The first six consuls in the self-government of the Fondaco were 1492-1504 members of the family. With his five sons, he turned his father's business into one of the largest trading companies in Europe. Their retail range was extensive and mainly included spices, paints, precious metals, silk and silk goods, canvas and cloth, wines, coal and steel products, tobacco products, leather and hides, weapons and Nuremberg handicrafts, the latter mostly in exchange (raw materials for finished products). Around 1418 he donated the famous Imhoff Altar for the Lorenz Church .

Konrad's son Hans IV († 1499) founded a second trading company, which from the second half of the 15th century focused on the trading centers of Western Europe. With his eight sons, he not only occupied the old branches in Venice, Salzburg, Linz, Prague, Brno and Olomouc, but also founded new commercial branches in Naples, Aquila, Messina, Lyon, Saragossa, Lisbon, Antwerp and Amsterdam. Hans IV. Donated to 1,493 the tabernacle in the church Lorenz of Adam Kraft . At the same time, in 1479, his older brother Konrad († 1486) acquired shares in the silver mine in Schneeberg (Ore Mountains) and in other Saxon mines and in Silesian gold mining. Around 1455 the family donated the Imhoff triptych by Valentin Wolgemut to the Elisabethkirche in Breslau . Individual family shareholders also took part in other companies in Frankfurt, Augsburg and Antwerp.

With Hans' son Hans V. (1461–1522), the company took the first steps from barter to money and banking. 1487–89 he was involved in a company that bought ducat bills of exchange for Venice in Frankfurt in order to collect them there and then sell them again. Apart from that, however, he concentrated on trading in goods, while the Augsburg branch operated financial transactions. In 1513, the Mansfeld copper was added to the traditional trade objects when his daughter Katharina married Christoph Fürer . In 1519 he became "Second Mayor". Alongside Christoph Fürer and Niklas Haller , he was one of the councilors who gave new impetus to the declining craft and trade. In 1522 he was accused of having negotiated a monopoly for the Portuguese king, according to which only the Imhoffs should receive Indian pepper, ginger and spices from the Goa colony . Hans V. maintained close contact with his council colleagues Willibald Pirckheimer and Lazarus Spengler as well as with the artists Albrecht Dürer , Adam Kraft and Eobanus Hessus , whom he helped with both business issues and difficult financial situations. His son Hans († 1526) married Felicitas, the eldest daughter of Willibald Pirckheimer. Their son Willibald Imhoff (1519–1580) was a great art collector, around 1575 he had himself portrayed by Titian and busts of himself and his wife were made by Johan Gregor van der Schardt . He brought together his collection and the Pirckheimer legacy in the Imhoff art chamber . After the death of Andreas Dürer (Albrecht's brother) Imhoff was able to acquire numerous works by Albrecht Dürer. His descendants lived at Mörlach Castle near Hilpoltstein from 1625 to 1785 .

The saffron trade began to dominate over the traditional range of goods. In 1510 the Imhoff founded a trading post for the sale of Italian saffron in Bari . A brother of Hans' V, Ludwig (1466–1533), went there and founded an Italian branch that only died out in Bari in 1719. Hans V. and his son Andreas formed a shopping cartel with the Nuremberg Welsers . In 1505/06 three Imhoffs, the Hirschvogel and the Welser took part in an expedition on the first trade trip of Upper German merchants to India . Under the direction of Andreas (Endres) I. Imhoff (1491–1579), the subsequent reorientation from purely eastern and eastern trade to predominantly western and overseas trade was completed. From 1540 the Imhoff became increasingly involved in financial transactions, especially with loans to the French, Portuguese and Spanish crowns and to the dukes of Bavaria. Around 1565 the Imhoffsche Handelsgesellschaft reached its greatest expansion. The trade network spanned the Lübeck, Krakow, Prague, Venice, Aquila, Lisbon, Antwerp and Amsterdam area. Although the trade in saffron still played an outstanding role in the late 16th and early 17th centuries, the Imhoff were heavily involved in the Central German copper business ( Gräfenthaler Saigerhandel). While many patrician families no longer wanted to know anything about their origins as merchants and limited themselves to "being aristocratic" and living from their manors , the Imhoffs stayed in the 17th century, together with the Tucher trading company , which had been operating since the early 16th century Century was one of their greatest competitors in the saffron trade, the last trading company of the Nuremberg patriciate active on a large scale.

The Nuremberg merchant Andreas I. Imhoff († 1579) was the foremost slogan from 1564 (administrator of the city taxes ) and from 1571 Reichsschultheiß ; he also exercised the honorable office of custodian of the imperial regalia . Only the line he founded (the Andreas branch ) remained permanently connected with Nuremberg and Franconia . His descendants sat on the Nuremberg Inner Council until the end of the time in the imperial city and held the office of imperial school several times in the 16th and 17th centuries.

The family also spread to Bavaria and Austria, as well as Saxony, Braunschweig and Hanover and the Netherlands.

Hieronymus (1512–77) moved to Augsburg and worked there as a builder and councilor. His son Raymund (1548–91) was a merchant in Augsburg and Venice as well as a councilor and later mayor of Augsburg. His widow Regina, b. Bemblin (1554–1624), founded the pilgrimage church Maria Hilf (Klosterlechfeld) in 1603 . Children and grandchildren also became mayors in Augsburg and financiers of the French kings. The branch later withdrew to its property in Untermeitingen and became a member of the Swabian Knight Circle . Raymund's brother Hieronymus (1575–1638) worked for Emperor Ferdinand II during the Counter Reformation in Augsburg and was imprisoned by the Swedes for it. As mayor, in 1609, he arranged for Elias Holl to rebuild the Gothic Augsburg town hall . His descendants owned the lords of Spielberg and Oberschweinbach from 1600 to 1640 .

Hieronymus Imhoff (1606–68), great-grandson of Andreas, was a diplomat in the Swedish, Russian and Dutch services during the Thirty Years' War . His son Albrecht (1653–1715) served as a diplomat in Saxony, his son Rudolf Christian († 1717) in Brunswick and his son Wilhelm Heinrich († 1725) became the progenitor of the East Frisian-Dutch branch; his son was Gustaaf Willem van Imhoff (1705–1750), Governor General of the Dutch East Indies.

Jakob Wilhelm Imhoff († 1728) was an important genealogist . In 1684 he edited, among other things, the Notitia SRIG Procerum . Andreas Lazarus Imhoff († 1704), a descendant of Willibald Imhoff, became the Electoral Palatinate Privy Councilor and wrote the historical picture room , which was continued for a long time after his death and was also translated into French . Amalie von Imhoff (1776–1831), who played a role at the Weimar Court of Muses, also came from this branch .

Hieronymus Imhoff, born in Nuremberg in 1606, died in 1668 as a councilor to Duke August von Braunschweig . His three sons, in the Duke of Brunswick and princely East Frisian stood services, acquired by Emperor Leopold I in 1679 the Empire baron . Johann Baptist Imhoff zu Untermeitingen , Privy Councilor of the Bishop of Augsburg , was also elevated to the status of imperial baron by Emperor Leopold I in 1685.

Another Hieronymus Imhoff, Kurmainzischer and Princely Bamberg councilor, Stadtpfleger zu Vilseck , received permission from Emperor Leopold to call himself Imhoff von Mörlach , as he had owned the Hofmark Mörlach in Pfalz-Neuburg for more than 40 years. In addition, he was allowed to increase his coat of arms with that of the extinct imperial knightly family of the "Imhoff zu St. Johannis " from Upper Franconia . Leopold Alois von Imhoff on Spielberg and Oberschweinbach was raised to the baron status in 1781 by Emperor Joseph II and his brother Joseph Adrian, city administrator in Augsburg, by the Bavarian King Maximilian I in 1814. The Nuremberg line was enrolled in the simple Bavarian nobility in 1815 and raised to the baron status in 1871.

The genus still flourished in seven main lines at the beginning of the 20th century.

The Imhoff owned large estates in and around Nuremberg. Her Nuremberg headquarters was near the Lorenz Church and her trading house, the Imhoffhaus at Egidienplatz 25/27, which was destroyed in World War II , was right next to the Pellerhaus ; it probably originated in the 16th century, was rebuilt in 1791 to a classical and in 1827 to a neo-Gothic form. In 1957 a new building in modern form was built on the site of the Imhoffhaus and the Pellerhaus.

Other possessions they had, among other things:

The family coat of arms shows in red the front part of a golden lion with a backward curved fishtail (a so-called sea ​​lion ) and a spread left paw. The sea ​​lion is on the helmet as on the shield, here with a red tongue. The helmet covers are red and gold.

In addition to the usual alms and bequests to social institutions, the family also made a number of altar donations to various churches, mostly in connection with a mass grant :